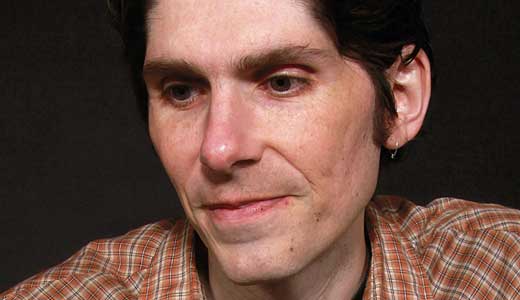 Welcome to the first in a series of new music columns that will run here. I’m tremendously excited about this project and grateful to share the space. Each columnist was asked by the editors to focus on music that inspires them. We hope to offer moments of sonic joy, celebrate good work, explore creative intrigue and encourage vigorous debates.

I’d like to look at the exhilarating (and terrifying) moments between private creation and public sharing … the path an idea travels to eventually become a piece of vinyl, or digital codes, or live spectacle. While pondering these notions, I met a musician and visual artist named Laurel Sprengelmeyer, who performs under the name Little Scream. Her debut album, The Golden Record (Secretly Canadian), combines autumnal folk with bracing up-tempo marches and sonic adventure. Sprengelmeyer, who lives in Montreal, conjures lovely and ragged landscapes, often disregarding genre expectations. While the record features many incredible guest musicians (from the bands Arcade Fire, The National and Bell Orchestre), I wanted to ask Sprengelmeyer about her lyrics, and how the words propelled the unusual composition of the songs.

LEO: The album seems focused on damaged but heroic characters. From the mention of the character “Amahl” to the “scarred” boys and normal people just holding on, there’s a narrative of how life can deform all of us.
Little Scream: Sometimes I feel like the whole reason I create is to valorize the lives of the people I grew up loving — the colorful and romantic characters who filled up the pages of my youth. The further out into the world I got, the more I realized that most people didn’t care about their experiences or who they were, even though to me they are the most beautiful and interesting creatures on the planet. So if I don’t write songs or paint pictures or tell stories about them, who will? Who will ever care that they existed? More importantly, how will they ever know how much they mean to me, how beautiful they are in my mind? That is a large part of what has motivated me to make these songs.

The reference to the opera “Amahl and the Night Visitors” is significant, because it’s the first piece of recorded music I remember hearing as an infant. There’s a personal parallel in that story — a boy who becomes unwittingly healed when he offers up his own crutches (to someone in need). It’s a beautiful metaphor … somehow it’s important to me on a subconscious level.

LEO: It feels like these songs often embrace the idea of “singing through the storm.”
LS: Whenever I find myself writing about a dark or troubling subject, I’m always reminded of how much I love Motown. In that music, there is a persistent joy that is made more powerful by its relationship to hardship. It is a defiant joy, the triumph of spirit over circumstance. That’s a spirit I always want to embody in my music.

LEO: At the end, you include a fragment of an Elgar classical piece that’s often used at graduations … but it’s also a song touched with farewells and the end of a special part of youth.
LS: The title “Pomp and Circumstance” was taken from “Othello” about the pride, pomp and circumstance of “glorious war.” But was I thinking about any of this when we recorded that? Heck, no. I was just thinking about how cool the graduation song sounded when we were checking the tremolo setting on the amp before recording the song “Cannons.” We were almost finished with the album, and I was definitely having a feeling of accomplishment, a sense of passage. A graduation of sorts from a life I had only imagined … toward a life where the imaginary was becoming more concrete. Later that night, I decided to look that song up and was really struck by its poignancy in relation to war — the strange social significance of that combined with the personal meaning. It was a message I wanted to include, even if only as a gesture. It makes me reflect that perhaps a lot of the greatest moments on this album come from the serendipity of my unconscious intentions. I feel like that about a lot of things in my life.