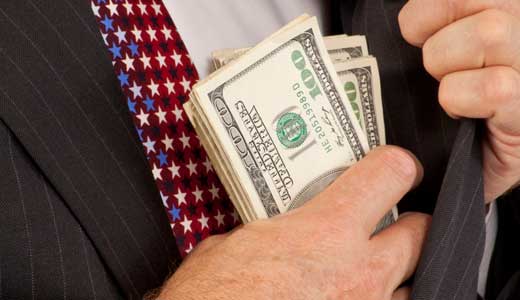 Back in March, long before the electoral tumor of incumbent Democratic Gov. Steve Beshear and Kentucky Republican Senate President David Williams metastasized into the gubernatorial campaign of the present day, the political posturing between these men focused on differing ideologies to plug a $142 million statewide budget shortfall, namely: borrowing against the future versus cutting present-day programs.

As the typical gridlock embroiled Frankfort against the backdrop of a high-profile campaign, they ignored many silver bullet solutions to those Kentucky families hardest hit by the economic recession, none the least of them being comprehensive tax reform.

One of those silver bullets was House Bill 182. Authored by Louisville Rep. Darryl Owens, D-43, the bill would’ve capped the annualized percentage rates charged to recipients of payday loans at 36 percent — a marked improvement from their current APR of 459 percent on a 14-day loan, as permitted by state law.

For a moment, it seemed like HB 182, by then in its third year, would have a real shot. It was lucky enough to receive a hearing by the House Banking and Insurance Committee, the result of hard work by consumer advocates and, perhaps, the sheer number of the bill’s cosponsors (28).

“There is broad statewide support for lowering abusive 400-percent rates in favor of a common sense 36-percent cap for payday loans,” said Anne Marie Regan, senior staff attorney for Kentucky Equal Justice Center and co-chair of the Kentucky Coalition for Responsible Lending in a statement, “just like Congress did for the military and 17 other states have done.”

Indeed, www.responsiblelending.org reports that those states (including the District of Columbia) that have adopted double-digit interest rate caps have reported approximately $1.8 billion in savings.

Yet when the Banking and Insurance Committee convened on March 11 and their votes were counted, HB 182 had failed, 13-10, and Kentucky’s payday loan lenders — many of them located out of state and therefore not beholden to the working-poor constituencies their for-profit model depends upon — had won.

According to a 2009 report commissioned by the Financial Service Sectors of America, non-traditional lenders extended 120 million payday loans with a value of $42.1 billion in 2008. Of that figure, fees and other miscellaneous bank charges accounted for $7.3 billion. In the United States, there are an estimated 22,000 payday loan centers as of 2008, and of those 10,000 engage in the kind of short-term due dates that require perpetual borrowing in order to pay off, which account for roughly three-quarters of the industry’s profits, and whose users are twice as likely to declare bankruptcy as those who don’t participate in such programs.

To ignore the debt spiral experienced by families locked into exorbitant rates is one thing; to ignore the electoral influence the payday loan business has on our state legislature, as Owens’ comment suggests, is another.

A couple of months before the March vote, the Herald-Leader reported that the industry spent $120,000 lobbying Frankfort in the first eight months of 2010. In an editorial, they published excerpts of a letter written by Todd E. Leatherman, executive director of the state Office of Consumer Protection, addressed to David Williams.

“According to the data, 83 percent of payday loans went to consumers who took out five or more loans at an APR of 391 percent during a five-month period,” Leatherman wrote. “On a typical loan of $255, this amounts to $90 in fees per month. What is offered to a consumer as a short-term, stopgap loan often becomes an insurmountable financial burden due to the high interest rate of this product.”

Williams didn’t respond to Leatherman’s letter, but then, why should he? Before his opponent was elected to the office of the governor in 2007, Steve Beshear worked for the payday loan industry in Kentucky as a lobbyist for the Kentucky Deferred Deposit Association in the late ’90s. A decade later, Beshear attended an October 2009 fundraiser in Cookeville, Tenn., home of Cash Express CEO Garry McNabb, but said his support for payday loan caps wasn’t compromised by the obvious conflict of interest.

“I can assure you there has not been the first hint of the fundraiser being tied to any kind of business,” McNabb told The Courier-Journal that year.

But according to Federal Election Commission and Kentucky Registry of Election Finance records obtained by LEO Weekly, McNabb & Co. are already at it again.

Over the past two years, payday lenders have contributed approximately $85,000 in state and federal-level contributions to the executive committees of both state parties, which essentially act as clearing houses for Democratic and Republican income and expenditures, the latter of which is mostly administrative costs, campaign financing and media buys.

And McNabb and members of his family represent the lion’s share of that figure. Over the last year, he and his wife, Teresa, have donated $40,000 to the state Democratic executive committee, and with the November election looming, they’re likely just warming up.

Cash Express, which maintains more than 100 locations in the commonwealth, isn’t just a Democratic darling, as Williams-Farmer has been the recipient of multiple $1,000 donations from payday loan lenders. In fact, Allan Jones, CEO and founder of Check Into Cash, has contributed $12,000 to the Republican Party within the last year, as well.

Kentucky Congressman Geoff Davis, R-4, is a prime example of the effects the largess has on voting records. As the top recipient of payday loan contributions in a 2005-2006 study conducted by MapLight.org, titled “Payday Lending Money and Politics,” wherein David received $33,650, he cast a vote against a bill in 2006 that would cap payday loan rates for military veterans at 36 percent.

Although the bill passed, politicians like Davis, and the interests that influence them, are the rule, not the exception.