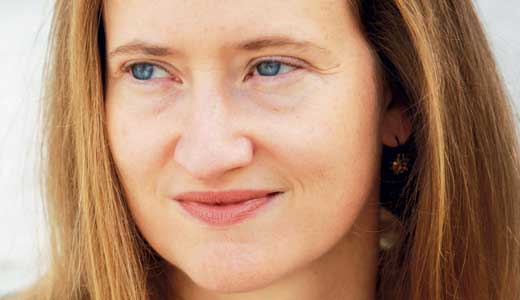 Call it a function of our country’s collective obsession with immediate gratification, but the United States has never appreciated its contemporary composers like they do across the Atlantic. Nonetheless, a Louisville composer, Rachel Grimes, formerly of the Rachel’s band, has helped pave the way for new music poster children like Jóhann Jóhannsson, Zoe Keating and Nico Muhly.
Another name to add to that list is the California-born composer Dustin O’Halloran, who proudly declared that the Rachel’s album Music for Egon Schiele “is still one of (his) favorite records” and that it’s an “honor” to tour with Grimes.
“I spent several weeks in Europe last fall and had a wonderful experience,” Grimes says. “I met Dustin O’Halloran in Berlin, where he is now living. We had so much in common to compare notes on. There is increasing interest there in composer/performer instrumental music that is not strictly academic.”
Pianist Grimes worked with the Rachel’s between 1991 and 2005, and now works both as a soloist and with the Louisville-based rock band King’s Daughters & Sons. Her first solo album, Book of Leaves, was conceived in a holy setting.

LEO: What is the connection between your music and the spiritual/religious world? You recorded in an abbey, and you’re playing here in a church.
Rachel Grimes: Churches typically have wonderful acoustics and often really nice instruments — the case with both St. Francis of Assisi and Loretto Motherhouse. Both places welcome musicians and have frequent concerts. I am optimistic that there are others who really want to experience music in an intimate and personal environment.

LEO: What is it like playing solo, classical-type piano and more rock-type keyboards in KD&S?
RG: Well, I have always played a lot of different styles of music, because it is what I enjoy. I really enjoy playing with (KD&S members) Kyle, Todd, Michael and Joe — we seem to have this ongoing, unhurried conversation over the years that is really satisfying. I have a new piece for a piano and string trio and a few new pieces for solo piano that will be on this concert. I am working on recording those along with two new chamber pieces.

It was in film that Dustin O’Halloran began his ascent. Songs pruned from his first two albums, Piano Solos Vol. 1 and 2, effortlessly matched Sofia Coppola’s impressionistic rendering of “Marie Antoinette” in 2006. Three years later, O’Halloran was commissioned to compose his first original score, for William Olsen’s “An American Affair.” The experience of working with other players would inform the much more textured and ensemble-heavy Lumiere, his most recent studio album and first for 130701, FatCat’s orchestral imprint.
“I had always wanted to explore writing for other instruments, and in some ways I was always hearing them in my head,” O’Halloran says. “After doing a couple film scores, where I got to explore this, I really wanted to bring it back into my own work.”
Backed by the ACME Quartet, composer/violinist Peter Broderick and Stars of the Lid’s Adam Wiltzie on guitar, O’Halloran makes the transition from solo pianist tinkering away in an Italian farmhouse to full-fledged studio impresario look easy. Here, ambient and electronic music embellishments hover above plaintive string arrangements that support rather than overwhelm O’Halloran’s elegant expressions on keys.
Grimes and O’Halloran’s joint tour will hit other important U.S. cities in addition to Louisville, including Chicago and Hollywood. Grimes adds on her website, “If you know of any nice venues with a grand piano, please drop me a note.”