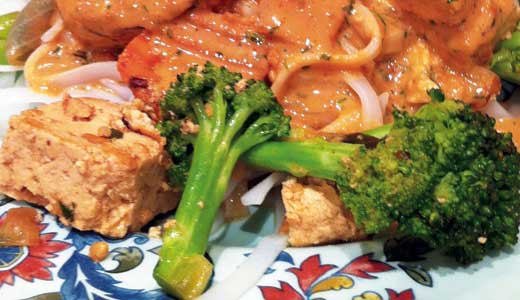 A few weeks ago, a friend issued a community challenge to go vegan for a month. I’m always up for a challenge, even if it’s just to prove a point, so I accepted the dare, along with a slew of other people. I’ve written about my views on factory farming before, but I’ve always made the disclaimer that I’m not a vegetarian and I’m a big believer in sustainable farming — meat and dairy products included.

I did, however, grow up vegetarian. The world was a lot different then. Pardon me while I relive my childhood: Organic certification didn’t exist, and things were just labeled “natural” or categorized as “health” food. A couple of years ago, I spent an evening with a handful of people who had grown up the same way — in the health food industry. It felt like group therapy as we empathized with each other on how embarrassing whole wheat carob birthday cakes were, and our parents’ lame attempts to satiate our desire for artificially colored food by adding beet or spinach juice to our buckwheat pancakes. Not the same, Mom and Dad. Not the same.

Anyway, things were different back then, and unless you were going to your neighbor’s farm, there weren’t better eggs, and meat wasn’t promoted as organic or pastured. It just was what it was, and so some people — like my parents — went vegetarian.

Throughout the past 20 years, the food landscape has changed dramatically. There are so many more options now that I don’t feel sorry for kids who grow up eating healthy. Even your favorite junk food can be made organic. With the arrival of organic standards came certified organic animal products. Even more recently has been the locavore movement, with small-scale producers popping up all over the country. Access to fresh, pastured, sustainably produced meat is a relatively new option for most Americans. This development is exactly why I stopped being vegetarian. I feel good about the meat I’m now able to consume and take comfort in knowing the animal lived a happier life. Plus, grass-fed animals produce significantly more nutritious meat than grain-fed animals. In fact, if you want to talk trends in the natural products industry, vegetarian is not where it’s at. Pastured dairy, eggs and other animal products are huge right now.

The friend who issued said challenge is not a vegetarian. Not even close. She is a foodie with a penchant for doing the right thing. She recognizes that food choices are complicated and has been pretty strict with herself about consuming only locally sourced meats and dairy products. Haunted by the horrors of factory farming and the threat of depleted oceans, she feels guilty about her personal consumption of foods that give her the most pleasure — and the fact that there is not enough sustainably produced food to feed others. Her solution was to issue a community challenge to adopt a more ethical diet, in a try-it-on-and-see-if-it-fits kind of way. The dare was issued in tiers. Options included going vegan, vegetarian or committing to buying local and humanely raised products for the full time or a portion of the challenge.

Coincidentally, the movie “Forks Over Knives” was playing at Village 8 Theatres when I decided to go vegan. The timing was perfect. The documentary stars two research doctors — Caldwell B. Esselstyn and T. Colin Campbell, both raised as dairy farmers — who present compelling and sophisticated research on the correlation between the major causes of death (cancer, heart disease and type 2 diabetes) and the intake of animal proteins.

The title of the film is a double entendre. I assumed “knives” referred to the ethical question of animal treatment (and ultimately death) a la “Food, Inc.,” but the story really addresses whether we should be undergoing elective bypass surgery to fix heart disease when research has shown that eliminating animal protein can reverse it. Esselstyn poses the question of whether going vegan is extreme compared to the alternative of rerouting your cardiovascular system.

The film also points out some of the social and environmental arguments for moving toward a plant-based diet. Cattle alone consume the caloric equivalent of feeding 8.7 billion people a year. That’s right, on cattle feed alone, we could feed the entire human population, plus another 2 billion people. Then we can factor in the volume of water necessary to grow grain for that much animal feed.

The biggest question most people have about veganism is “What can you eat?” Well … everything else. Obviously, there are vegetables. It is easy to adapt Indian, Mexican, Italian and all kinds of Asian food to be vegan. Nut butters, beans, grains and coconuts — alternatives exist for just about everything that isn’t vegan. Milk, butter, sour cream, cream cheese, ice cream, coffee creamer, cheese, and meat alternatives can all be found.

Right now we are in the peak of the growing season in terms of local produce. It is certainly the easiest time of the year to be vegan. Essentially, the biggest challenge isn’t finding delicious vegan food, it’s not eating the other stuff.

So am I going to stay vegan? I don’t know. New York Times food writer Mark Bittman found himself in a similar predicament, trying to balance his love of food with his desire for a healthier and more ethical diet. He adopted a rule that he now promotes: Vegan before 6. He eats a 100-percent plant-based diet every day until 6 p.m. and eats whatever he wants for dinner. Is that my solution? I don’t know … but that kind of moderation may be more my speed. Right now, I’m committed to trying out the challenge.

I’d challenge the rest of you. Adopt whatever your version is of a more ethical diet for whatever period of time you are willing to commit. Below are some vegan recipes.

Veganomicon’s Basil-Cilantro Pesto
This makes the best addition to a tomato sandwich and jazzes up any type of pasta. For extra fun, toss the pasta with fresh steamed or sautéed vegetables. The basil, cilantro and garlic are all in season right now.

Place everything but the olive oil in a food processor and blend until pasty, scraping down sides occasionally. With food processor on, slowly drizzle in olive oil. Blend until smooth with no large chunks of almonds left.

Creamy Peanut Sauce
This sauce will dress up rice noodles, stir-fried vegetables, spring rolls, and can be used as a marinade for tofu or added to a simple bowl of rice. The soy sauce, hot peppers, garlic and cilantro are all available locally.

2 teaspoons (or so) chopped chile or jalapeno

Blend all ingredients except cilantro in a food processor until smooth. Add cilantro and blend until it is chopped but not totally blended.