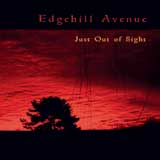 If you’re going to backtrack through ‘70s rock like the Allmans, name-check the Heartbreakers and borrow from Joe Cocker’s arsenal, remember those guys had fun. Remember the chaos and foolishness that seemed, well, just out of sight. Going by the rock checklist, Edgehill Avenue’s third studio album has all the proper parts but ultimately few shining moments. At least the band chose the right singles. “Manifesto” plays like an encore, all flash and octane. The seeming restraint that exists on the previous two songs is gone. The song has obviously been stage-tested, as has “Reckoning Day,” a slow burn that will draw lighters (or lighter apps, natch) and that weird, collective sway an audience does during songs like this. That those two songs are placed square in the middle of the disc together makes what comes later a letdown. “Red Sky” shows promise: punky bass and drums on overdrive, but the vocals fall flat. After a while, the songs somehow lose their ‘70s mask and reveal something sinister: Why do half these songs sound like “November Rain”?