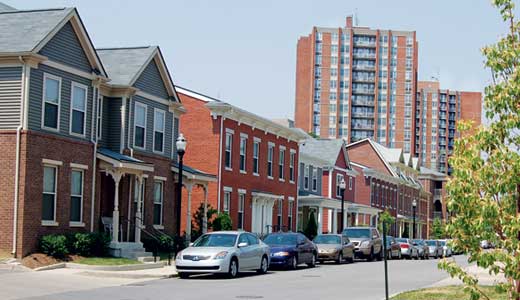 Arric and Delores Fenwick sit side by side in their apartment’s front room. Delores, 50, folds laundry at their dining room table. Upstairs, laughter follows a hollow thud. Their kids are wrestling. Delores and Arric also begin to tangle as the former Clarksdale residents go back and forth on their new home, Liberty Green.

Arric applauds the Louisville Metro Housing Authority for using $40 million in grants from the HOPE VI Revitalization Program, along with millions in private investment, to tear down Clarksdale’s aging, barracks-style housing and build a serene, attractive mixed-income neighborhood, Liberty Green. He loved Clarksdale, but says change had to happen.

Delores nods but shifts in her seat, a bit flustered. She misses Clarksdale, which had a park and recreation center. Liberty Green has open fields, but nothing for children, and it’s unclear if or when it will. She also misses her friends, the web of support woven into the 65-year-old complex, next door to the city’s medical district. Neighbors were always willing to help — a dollar or two, a few hours watching the kids.

“It’s nice to have that crutch,” she says. Delores knows the majority of public housing residents are single moms. And she’s seen a few at Liberty Green struggle to pay their portion of rent and utility costs, and meet the work or school requirement the U.S. Department of Housing and Urban Development demands of HOPE VI residents.

The Metro Housing Authority says the rest of Clarksdale’s former residents have taken Section 8 vouchers, scattered public housing units, or moved into other housing projects. About 160 landed in Beecher Terrace, three in Parkway Place. Close to 90 families ended up at Sheppard Square, which is next on the list for HOPE VI demolition.

Local housing advocates worry about the low rate of public housing residents returning to Liberty Green, one of many concerns raised following a report LMHA was required to complete in accordance with HOPE VI. University of Louisville was paid about $200,000 to conduct it.

Tysanna Dozier, a friend of the Fenwicks, walks in and gives a round of hugs. She says she’s also a former Clarksdale resident who now lives in west Louisville. The mother of five considered moving back to Liberty Green, but a large, outstanding LG&E bill made it so she couldn’t put utilities in her name. A case manager, assigned by LMHA, is supposed to help work through these problems. Unlike the HOPE VI mess that was Park DuValle, where residents were essentially kicked out with little relocation assistance, LMHA devoted $4.5 million dollars to case management for Clarksdale residents.

But not everything has gone according to plan. “I don’t have a case manager,” Dozier says, shaking her head.

Still, whatever may have happened with Dozier, the report gives case management a glowing review. A few highlights: Nearly 77 percent of residents who participated in the study found their case manager helpful or very helpful. Over a three-year period, the poverty rate among surveyed households dropped 12 percent. Around the time of relocation, dozens of residents secured jobs. And case managers appear to have helped boost the number of residents earning a GED and vocational training.

Some of the data collected for this report was included in LMHA’s second, and ultimately successful, Sheppard Square HOPE VI application.

Cate Fosl is director of the Anne Braden Institute for Social Justice Research at U of L. She’s worked as a social worker and says support services are welcome and valuable to residents. But Fosl is frustrated that the report acts as a stamp of approval, not an honest assessment of how residents are faring. And, she says, some data seems conflicting.

For instance, while the report concludes case management improved education and job marketability, when participants were contacted a few years after relocation, unemployment rates were slightly higher. The percentage of those with no earned income rose from 60.8 percent to 72.3 percent. The economy may be partly to blame, but a greater percentage of residents also reported more “barriers” to employment, including poor health and lack of education.

Fosl also worries that 42 percent of participants reported being unhappy with the move, versus 40 percent who were happy they were out of Clarksdale. Who was unhappy? Why? How can that be fixed? She wonders.

Overall, 16 percent of surveyed residents reported better mental health post-relocation. But 15 percent said it was worse, with roughly 69 percent saying it was unchanged. While 44 percent said they had better housing conditions than in Clarksdale, the remainder said it was the same or worse. And there are indicators that the elderly took the move especially hard, both physically and emotionally.

Fosl, who leads a reading group for advocates and scholars interested in housing as a social justice issue, has passed along the report to its members. The consensus is that it raises more questions than it answers.

Tim Barry, executive director of the Metro Housing Authority, points out this report was conducted from surveys that were completed at two points in time — 2005-2006 and 2008-2009.

“It’s a snapshot in time. For those families, things may have improved since that time,” he says. “Part of the unhappiness may have stemmed from living in a place like Clarksdale.”

Barry says the report should not be interpreted as an assessment of the HOPE VI program as a whole, since it’s intent was to determine whether case management had a positive effect. He says it did.

But Cathy Hinko, a longtime housing advocate and executive director of the Metropolitan Housing Coalition, feels there’s not enough context to prove that.

“I just find it problematic,” she says. “All I get are numbers.”

Rather than just percentages on employment and perceived health and happiness, Hinko would like details on what services families used and for how long. Without that, it’s hard to know what services yielded dramatic gains and what may need tweaking. With Sheppard Square on the horizon, she says she would hate to see ineffective practices repeated.

In addition, Hinko is troubled that there is no comparison of those who received case management versus those who did not, to gauge the trajectory of those two groups.

Ramona Stone is the report’s principal investigator. She earned her PhD in urban affairs at U of L and is now an associate professor at the University of Kentucky’s College of Public Health. Stone says she was told that everyone from Clarksdale, at some point, received some form of case management, therefore a placebo group was impossible.

But according to LMHA, while pretty much everyone was offered case management and filled out a survey assessing their needs prior to the move, only 200 Clarksdale residents actively worked with case managers on an ongoing basis. Many opted out, never followed up, or got lost in the shuffle.

In addition to surveys, Stone used LMHA’s tracking system and says the resident information they store isn’t conducive to in-depth research. Still, she’s adamant her data proves case management was successful. She talked by phone with hundreds of former Clarksdale residents and met in person with eight. She says she saw positive transformations in each one.

“The people I spoke with, even though they were not happy with everything,” she says, “they were in a better situation.”

Stone also emphasizes this report was not meant to monitor progress, but rather check in on it, using “slices” of information collected a few years apart from a random sample of families and elderly residents who represented Clarksdale as a whole.

But advocates argue without more holistic data, it’s a bit premature to conclude that social services provided to Clarksdale residents were an “excellent example of a functional and productive community partnership that works towards advancing quality of life and wellbeing of our most vulnerable citizens.”

Chris Kolb, an urban anthropologist, researcher and professor at Spalding University, says given the copious amounts of national research criticizing social and health outcomes of HOPE VI, he sees this data as a cry for more critical analysis. He worries that LMHA is forging ahead with its third HOPE VI project — Sheppard Square — without a clear picture of if or how Louisville’s low-income families truly benefit.

“It raises some key questions that need addressing,” he says. “We’re undertaking a massive social policy switch and we don’t really have a handle on the effects that it’s having on peoples lives.”