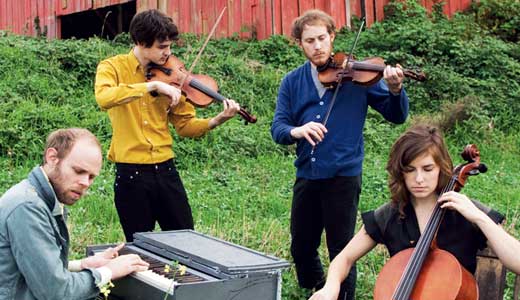 Justin Ringle started the Portland, Ore.-based band Horse Feathers in 2004. Their three records have helped establish Ringle and his rotating cast as a new favorite to both young rockers and older folkies. Their most recent album, Thistled Spring, was released last year by the Kill Rock Stars label.

LEO: Do you enjoy being out on the road?
Justin Ringle: Yes and no. I’m just starting to work on a new record now, so it’s always bittersweet. I tour because it’s a part of my job, but sometimes it becomes a time-management issue. I’d like to be able to work on new stuff as well. It’s very difficult — there’s certain things I can do, but it’s really hard to write on the road. I need planned home-stays to act like a normal human for periods of time.

LEO: How far do you hope to go with your music?
JR: Well, that’s funny, ’cause I think about that every single time I make a record. On the one hand, I’ve already exceeded every single goal I ever had with music — I’ve got a much bigger career, in one way, than I ever thought I would have. At the same time, it’s contrasted by the fact that I still have to pay my bills and be an adult. As soon as that switches over from something purely about ambition and inspiration into dealing with the business, I’ve got to say that that changes the perspective. I’m pretty comfortable with where things are; if it got bigger, that’s great, but I just want it to happen in an organic way. That’s a complicated question.
LEO: Your music has a wintery vibe. Do you find that it plays differently in different seasons?
JR: Yeah, it does have a couple different paces, I suppose. The conception of the records is always different than how it comes off live. I started playing completely geared for listening rooms — very spare and quiet — but we’ve played from super-small, intimate rooms to thousands-plus festivals, and the music changes a lot depending on the situation. For me, the writing and recording has always responded to seasonal changes, but for the live show, it’s kind of a different experience than the records.

LEO: Do you do better in towns with lots of beards?
JR: You know what? I don’t think so! The beard crowd — that’s the Pitchfork crowd. And that’s cool, and I’ve lived in that galaxy a little bit, but honestly, the people who appreciate the music the most — maybe not surprisingly — we have a lot of 35-year-olds on up who’ve definitely gotten more into the music. We play some shows where it’s a very NPR-type crowd who really enjoy it; we play some other shows where it’s mostly 20-somethings. We’re maybe somewhat of an anomaly in that sense.

LEO: You’ve been through Louisville before. Do you have any impressions of our city?
JR: Yeah, I really liked it! Louisville is nice. We had a really great show — I think it was at, like, Skulley’s or Skull Kitchen? Skull Alley, right. You never know, when you play a market you’ve never played before, who is going to show up. We had an awesome show there — we had low expectations, ’cause we’d never been to Louisville before, and it was actually rad. Maybe you guys set your own bar.