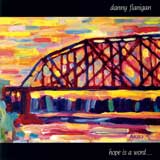 Nick Hornby wrote once about how he never understood Jackson Browne’s music before he turned 40. Even at a much younger age, I understood the sentiment: Rock is for the young, it’s supposed to be edgy, blah blah blah … However, most popular music today doesn’t express what life is like for 40-something-and-up parents, and most songwriters aren’t Bob Dylan. Louisville vet Danny Flanigan’s new album is a solid entry into the middle-aged domestic music genre: part Lyle Lovett (clever), part James Taylor (sentimental) and part John Hiatt (both). He’s a skilled lyricist, a natural storyteller backed by solid musicians like Steve Cooley and Todd Hildreth, and the album benefits from crystal clear production by Danny Kiely. Some songs are full of life, though others are a bit too ready for public radio picnics. You’ll laugh, you’ll cry … but if you’re under 40, this might not be your thing. Yet.