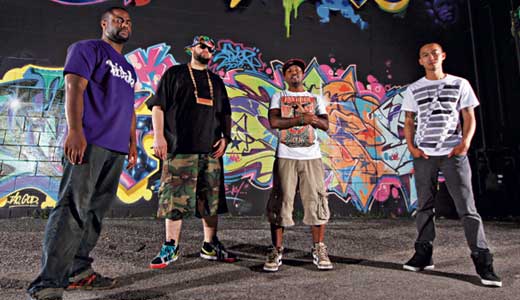 For the past decade, Louisville’s musical focus has been dominated by My Morning Jacket, while artists as varied as Wax Fang, VHS or Beta and Ben Sollee have emerged as contenders. Skyscraper Stereo is ready to be added to that mix. Their latest release, Homebois in Outer Space (Little Heart Records), might very well be the best hip-hop album you’ll hear all year. Period.

Skyscraper Stereo might also be the only group around that can namedrop Jimmy Page, Eric Clapton and Jimi Hendrix next to Lil Wayne, Notorious B.I.G. and Kanye West without any sense of irony. “I don’t really listen to much hip-hop at all,” says rapper/producer Jawon “Chuck Deuce” Dunn as he sips iced coffee in front of the Starbucks at Baxter and Cherokee. “I started as a guitar player, so Led Zeppelin is huge, Eric Clapton, Jimi Hendrix — all of that is what I listen to.”

The group has been working together for five years, starting with Jawon and Daniel “Goodbar” Guess. Skyscraper Stereo began to mesh when the duo brought in Jawon’s brother Landry “Dat Boi Dunn” Dunn and Yao “DJ Fluid” Hong.

“We used to fight over G.I. Joes; now we fight over music. It just changes themes,” Landry says of their creative/familial dynamic. “He always wanted to be Storm Shadow. He’d never give me Storm Shadow; I had to be Snake Eyes.”

“I wanted to be Snake Eyes, and you wouldn’t give him to me!” Jawon interrupts. “But that’s another story.”

They recorded their new album at Dunn’s father’s home off Newburg Road, and the guys have thought plenty about the influence (or lack thereof) their hometown has had on their music. “The fact that there isn’t one certain sound that defines Louisville music gave us free reign to do whatever we want, because there wasn’t a pattern we had to follow,” Landry says.

“Since we’re not in L.A., New York or Chicago,” Jawon continues, “there’s no sound I feel as though I have to adhere to. So the only influence I can say is that we grew up in the suburbs watching MTV and ‘Beavis and Butthead,’ where Dr. Dre would come on one second, and right after that, Nirvana would come on next.”

Which is exactly why it isn’t strange they’re the only hip-hop group on a mostly rock label. Landry chuckles when I point out that fact. “In this city, we have a reputation for being the rock bands’ favorite rap group.“

“When we started, we sat down and I said, ‘We should market ourselves like a rock group,’” Jawon says. “Rock bands play and play and play until you can’t ignore them anymore. Rappers, at least around here, are more akin to just trying to get something on the radio, kicking back and hoping that works.”