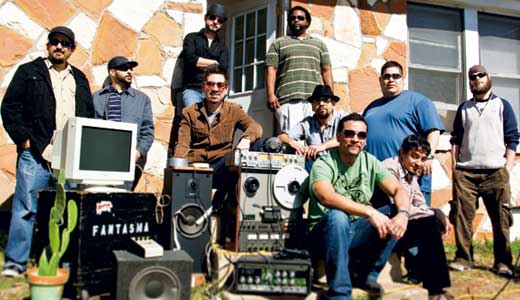 LEO: How do you feel playing in parts of the United States where Latin culture isn’t nearly as prominent as it is in Texas? Is it harder — or easier — to find excited crowds wanting to listen?
Adrian Quesada: There’s really no formula to who enjoys our music. Sometimes we get better reception in Canada or Europe where people don’t understand a word we’re singing about, and sometimes there’s nothing like playing for some “raza.” As far as the U.S. goes, some people are just more open-minded than others and don’t box music and culture into little packages; we tend to do well in those situations.

LEO: What’s more important — the Latin part or the funk part of the music?
AQ: Both parts of it are just as important, but I’d say the Latin part may be the harder one to master … We’re working constantly to get better as a band, and with funk and Latin music, the idea is: Less is more. It’s about being a part of a greater whole and not overplaying. The instruments are supposed to be having a conversation with each other.

LEO: When writing, do you think about how the music will move people to dance?
AQ: We don’t think about the dancing until we actually try out a new tune at a show. When writing, we’ve been trying to write a good song for the sake of writing a new song, instead of to make people dance. But to be totally honest, if a non-danceable song kills the energy at a show, sometimes it gets weeded out of our set.

LEO: How much are things like Grammys worth to you?
AQ: It’s more of a reward for all our hard work over 11 years.

LEO: You’ve done a lot by yourselves. Have you had discussions with major labels or others who might be able to offer you money or access that you can’t do yourselves?
AQ: In the early days, we had some major label interest. None of it panned out for one reason or another, and it’s probably a good thing at this point in our career. There was a lot of people telling us what they thought we should be doing, and it usually involved telling us we were doing the wrong thing. We chose the long road, but it’s one that we’ve built along the way, and won’t crumble as it has a steady foundation. We haven’t done everything independently and have worked with some great distributors, labels, publishing companies, etc.

LEO: How much do you feel inspired by other forms of American pop or ethnic music genres?
AQ: We get inspiration from all over the place. We’re not above listening to pop music, either. With 10 members, there’s so many influences as everyone has their own taste in music. There’s a common thread, of course, and that’s Latin and funk music. You may not hear the influence of many genres outside of that, it’s very subtle, and we’ve never been about forcing the music in any direction just for the sake of doing so.

LEO: Are you the best live band out there? If not, who’s better?
AQ: No, we’re always striving to be better. But I do think, pound for pound, we can hold our own with the best of them, and we’re one of the most versatile bands around.