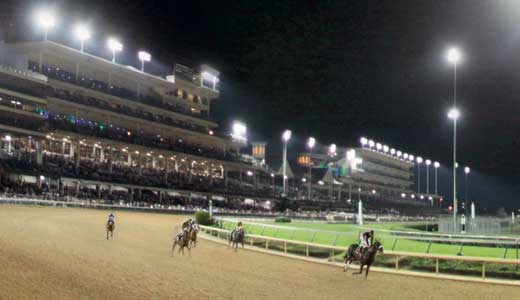 In recent years, horseracing aficionados have groaned that their sport is dying. Every year, they say, the fan base grows grayer, complaining that racetracks aren’t doing enough to attract younger people to the game.

Well, the gray-sayers must not have heard of Downs After Dark — Churchill Downs’ version of horse racing under the lights that packs the track on select Friday nights throughout the year. From 20-somethings to 60-somethings, race-goers come decked out and ready to party.

“We never miss it,” says Sarah Riedinger, who with her gang of seven girlfriends, is seated around a semi-circular white, blue and green outdoor sofa on the fourth floor terrace on a recent Friday night. The sun is setting, the sky is turning dark blue, and bright overhead lights blaze down upon the famous track. On this night, there are 25,523 fans — filling the seats, walking the hallways, and dancing as music blasts from large speakers on the ground floor.

“We always pick out the Friday night dates months in advance and plan it so we all can be here,” Riedinger explains.

“Oaks and Derby, and the Thursday before the Derby — and all the Downs After Dark Fridays — we’re here,” adds Season Harrig. “We like it because getting dressed up for the big days at the track is so … so different. It’s so social.”

Which is just the way Downs After Dark is meant to be.

“We’re ecstatic with the way it’s going,” says Churchill Downs president Kevin Flannery. “And it is very intentional with the way we have launched the Downs After Dark racing. We really sat back and asked ourselves, ‘What do the fans want? What do the various age groups want?’ And it’s really simple. It starts with racing, which we can do better than anybody. But around that we’ve tried to provide other entertainment options that appeal to a younger audience — whether that’s music, or whether that’s fashion, or something else.

“The great news,” Flannery adds, “is they’ve responded to that. When they’re here on these special Friday nights, we see dramatic increases in attendance and handle.”

“Handle” is the racing word for the amount of money wagered. And before the gray-sayers complain that the party is nice, but dressed-up young ladies don’t bet, these girls shake their heads, insisting that’s not the case.

“We’re not $2 to show,” Riedinger says. “We bet exactas, and we bet to win. It’s all about that winning ticket. I’ll be waving that thing in your face. Jumping up and down.”

Exactas? Did someone mention exactas? The ladies point to friend Ashley Bearden, and yell (somewhat in unison): “She did. She hit a $450 exacta.”

According to Darren Rogers, the track’s director of communications, the special Friday night programs have settled into a predictable, and very desirable, pattern.

“What we’re seeing is attendance triple, and the betting handle double, compared to a regular Friday,” Rogers says. “It means we’re getting a lot of new people introduced to horse racing, and business is good, too.”

Flannery says he did not expect the ratio to be so spectacular.

“The reality here is our regular customers are used to wagering,” he explains. “They know how to handicap a race, and how to go to the windows and make a bet. The new customer has to get comfortable with that. And you have to give them time to acclimate to their surroundings. The good news is they’re doing it faster than we thought they would. And the sheer volume of people and the focus on racing has been great. Not only for the track, but for the horsemen, because it fuels our purses.”

(Churchill has raised purses twice this meet, keeping up with an upturn in betting.)

Of course, special events at Churchill Downs are an easier sell in Derby-crazy Louisville than in Chicago or New York or Los Angeles — to name three cities where wagering and fan interest is down. Similarly, Keeneland, a track in the heart of the Bluegrass horse country, has seen fan-friendly moves by management pay off in terrific attendance and betting increases. But Pimlico, the Baltimore home of the Preakness Stakes, may be on its last leg.

Tracks are willing to try things. Gulfstream Park in Florida, for example, has long staged big concerts on its grounds on race days. Hollywood Park begins its races late on Fridays.

But Churchill’s Downs After Dark might be the biggest youth movement ever attempted by any track. As many as five bands may appear in one night at various locations around the track. Sometimes there’s a DJ. There are colored lights. High-end dining experiences with famous chefs. There’s a lot being poured into the experiment.

So what looks, at first glance, like a huge Spring Break keg party, with thumping speakers and no-tune music on the ground floor by the paddock, is just the first visible thing on the way in the door. In the grandstand box seats, it’s a night at the races that is just plain cooler and more comfortable than a day at the races in summertime. And the upper floors of the Clubhouse are definitely upscale — and hopping.

And that might be the secret. Instead of one big concert, Churchill seems to be offering something for every taste.

“Our property is so big that Downs After Dark is not focused on one specific area,” Flannery says. “We try to make sure that wherever you are — whether it’s in the Jockey Club Suites or in the Paddock, that something unique is going on that captures your attention between the races, and gets you — just basically having a good time and feeling good about being at Churchill Downs.”

Flannery, a Louisville native who grew up with racing at Churchill Downs, says he’s particularly inspired when he gets away for a few minutes to cross under the track through one of the tunnels to the darkened Infield. “I’ll look back and the stands are full. Yes, people are here for the entertainment, and music in the Paddock or on a balcony, but there are thousands of fans in the boxes, in the grandstand facing the racetrack, cheering the best jockeys and the best horses in the country.”

Well, the jockeys are pretty good, but there is some question about the quality of the racing because of the size of the fields of horses presented in the Friday night programs. Racetracks everywhere are having trouble filling the entry boxes for the races. There is a shortage of horses for all the racetracks that are open. And horse trainers don’t race their darlings as often as they once did. But Fridays have fared worse, it seems, in the battle for fuller fields. The results, of course, are low payoffs.

No doubt Churchill is aware of the problem and would love to present every race every day with 10-12 horse fields. That creates bigger payoffs that spark the interest of off-track bettors and Internet wagerers across the country — horseplayers who may have as many as 15 tracks from which to choose to bet.

Rogers points out another innovation called Fast Bet Mobile. It’s a relatively new system that allows patrons to buy a cash-betting voucher at a betting window, then bet the races via smartphone. The voucher amount is credited to their phone and accessed by a code number.

“It’s something we’re just pioneering and haven’t really promoted yet,” Rogers says. “The idea is to be able to bet from your phone, using the same ‘language’ younger fans are using to communicate with each other: by smartphone.”

“At the core of everything we’re doing is entertainment,” Flannery says. “Our customers want to have fun. It’s all about what the customers in your community enjoy doing and wrapping it around the racing product.”

And keeping the event fresh is a big part of that. This season there are just three Downs After Dark events scheduled for the spring meet — with one left this Friday (with a special post time of 5 p.m. to accommodate races that were added to make up for races cancelled due to tornado damage sustained in the barn area last week.) And there is one Downs After Dark set for Nov. 18, during the fall meet.

“Just a few minutes ago, a very loyal customer stopped me and said, ‘You should turn the lights on every night,’” Flannery says, meaning the track should bathe itself in light even when not racing, to be seen from a distance.

“But we’re hesitant to do that because we don’t want the lights coming on to ever become mundane. We want that to be special. As you know, we also had a night racing date on opening night of the spring meet. We called it opening night, not opening day, and not Downs After Dark. Bringing up the lights for the start of the season is like bringing back the curtains in the theater — a way to make things special. Create anticipation. More than night racing.”

And in that vein, Turf Club coordinator Lynda Woods says attendance has jumped among Turf Club members — and their families.

“I think we’re getting a broader audience because of Downs After Dark,” says Woods, manager of the 1,700-member Turf Club, which attracts high-end membership that is very devoted to thoroughbred racing and Churchill Downs. Many own racehorses, which is also crucial to the sport’s success. “All over the track, the special Fridays attract people who maybe have not come to the races before very much, and they are younger. That’s true in Turf Club, too. It’s people who have gone to college, established themselves in their careers. They join the Turf Club and are able to bring their friends and clients.”

Woods points to a situation on a recent Friday night in which a large group of young people gathered up Turf Club passes from their parents and were staging a big night in a very nice club atmosphere.

“They’re 21-year-olds getting to do something they wouldn’t normally be able to do — enjoying the big Friday night excitement in style,” Woods says. “And they’re around people who love the races, talk to them about it. That’s how we’re working to build a new fan base. We may do something different in the future, but right now, I think this is working for horse racing.”

And what’s working for Churchill Downs is working for Louisville, too, says Angela McCormick Bisig, a Louisville judge enjoying a June night on a terrace with friends.

“I think it’s a wonderful ambience, and such a great thing for our city,” Bisig says. “Last year, I was in Ireland with a friend, and when you went into the pubs they knew all about Churchill Downs and the Kentucky Derby — and they know it very well. So this place kind of puts Louisville on the map of the world. It’s wonderful that we can come out for the Derby, but it’s neat they found something we can come out for the rest of the year that’s special, too.”

Meanwhile, back with the Gang of Seven, none are waving any winning tickets, but they don’t seem at all discouraged — probably knowing there’s a big exacta just around the corner somewhere.

“We’re just having so much fun,” Riedinger says. “But don’t tell my husband how much fun I’m having.”