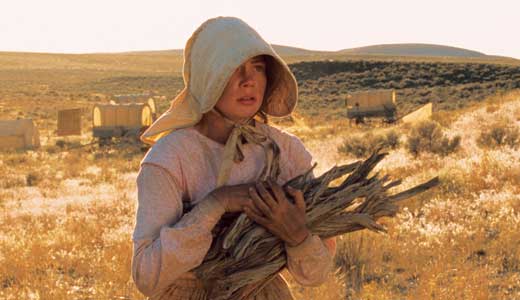 The following is a complete schedule of Flyover films, along with brief synopses. Tickets are $10 per film, or $8 for LFS members.

“Another Earth” took the Alfred P. Sloan Prize at Sundance. The Sloan is awarded to the film that best executes a science, tech or mathematics theme. In even bigger news, the coveted, low-budget indie was handed a bucket of cash from Fox Searchlight following a festival auction. Fox Searchlight will release the picture in July.

“Another Earth” is Mike Cahill’s first narrative feature. Its co-writer, Brit Marling, stars as Rhoda, with William Mapother as John. Mapother will be present for a discussion after the film.

LFS board member Tracy Heightchew singled out “The Lie” as one of the titles the film society is excited to bring to town. It’s directed by “Blair Witch” actor Joshua Leonard, who will be attending the festival with co-star Jess Weixler. Weixler was out of this world in 2007’s “Teeth” and also starred in “Peter and Vandy” from Gill Holland’s production company, The Group Entertainment.

The duo will participate in a post-screening Q&A. Greg O’Bryant, the film’s editor and a Louisville native, will also be on hand for the discussion.

“The Lie” is based on a T.C. Boyle short story. It follows an idealist musician-type as he ages into family life and disillusionment. When Lonnie (played by Leonard) tells a lie to get out of work, the fib slowly unravels, forcing him to come to terms with adulthood.

This little gem premiered at SXSW, winning something called the “Chicken and Egg, We Believe in You” Award. That sounds fitting, considering the promise displayed here by first-time director Martha Stephens. Though the project’s tiny $8,000 budget sometimes pokes through and the narrative ambles in spots, on the whole “Passenger Pigeons” is endearing and chock full of moments.

The cast features actors and “real people,” like Earl Lynn Nelson, who seemed to consistently bring a smile to my face. As the character Buck, Nelson plays a coal company suit in charge of damage control. Weeks away from retirement, Buck is helping to break in his young replacement, Nolan (Brendden McFadden), in the days following a fatal mine accident.

Buck and Nolan comprise one of the stories in this four-part narrative, centered on a miner’s death in Eastern Kentucky and the issue of mountaintop removal. Stephens is from the region, which is apparent from the film’s terrific sense of place. The director will be present for a discussion after the screening, along with actor Timothy Morton, who plays Lucas.

It’s a film about bagging. No, really!

Also known as “Paper or Plastic,” Alex D. da Silva’s 2008 documentary is more fun than it should be. It follows eight supermarket employees as they win their respective state’s “Best Bagger Award” and move on to the nationals in Las Vegas. The message here seems to be, regardless of how small the task, try to excel at whatever you do. That, and always keep your “smushables” on top.

The screening is presented by YUM! Brands in support of the Dare to Care Foodbank.

We’ve all heard the jokes about the little, old lady who sued McDonald’s after spilling coffee on herself. The case set off a pro-business/anti-trial lawyer movement that still ripples today, becoming synonymous with the term “frivolous lawsuit.”

“Hot Coffee” offers a cross-examination of how we perceive that case. Directed by Susan Saladoff, a former lawyer, the film explores, graphically at times, what really happened to Albuquerque’s Stella Lieback on that fateful morning.

Lost in the spin of those days are the 79-year-old’s third-degree burns and skin grafts that cover 6 percent of her body. Also seldom mentioned is the uniform, 185-degree holding temp of McDonald’s coffee, the 700 other reported burns that preceded the litigant’s injury, the company’s repeated refusal to lower the temp, and the initial $20,000 settlement Lieback offered the company in order to cover
her medical bills.

Due to a reticence on the part of its distributors, the centerpiece of this year’s Flyover was essentially slotted sight unseen. Based on the strength of the director’s past efforts, Kelly Reichardt’s “Meek’s Cutoff” was something of a programming no-brainer.

“She totally has my vote, even if she wanted to make a talking pug movie,” says Heightchew.

This David Strathairn-narrated documentary is a moving treatise on combat trauma and the challenges of returning home from war. Filled with stunning battle footage, archival propaganda clips and insights from noteworthy veterans like former Sens. Max Cleland and Bob Kerrey, “Odysseus” gives the CNN generation first-person perspective from those who fought.

Based on psychiatrist Jonathan Shay’s book of the same name, the film draws a connection from today’s soldier all the way back to Homer’s Odysseus. Then, as it is now, soldiers re-entering civilian life have incredible difficulty turning off “combat mode.” Many throw themselves into dangerous, battle-like situations; even more self-medicate with drugs and alcohol (or Lotus flowers, if you’d fought in the Trojan War).

Charles Berkowitz, the film’s director, will speak after film.

Producer Clara Bingham’s documentary on mountaintop removal should be required for anyone moved by Saturday’s “Passenger Pigeons.” Directed by Bill Haney, “The Last Mountain” brings us to the frontline of the battle for Coal River Mountain. Said to be the last great mountain in Appalachia not yet stripped for the coal within, the film follows the coal companies determined to strip the mountain and the locked-arm West Virginians who stand in the way of the heavy machinery rumbling toward it.

Bingham will be on-hand for a discussion after the film.

After losing his religion, Father William Smoorster (Steve Little of “Eastbound and Down” fame) goes on a canoe trip with an old friend. The padre doesn’t exactly find himself on the river; if anything, he succeeds in becoming more lost.

A favorite of many at the LFS, board member Gill Holland has a producer’s credit on the film, along with Danny McBride (star of “Eastbound”) and David Gordon Green (director of “The Pineapple Express”). “Catechism” was helmed by Todd Rohal, who will be around to chat about the film afterward.

There will be three shorts programs throughout the weekend:

Shorts Program I will be presented at the Dreamland Film Center, Saturday, 4 p.m.

Program II will show at the Kentucky Museum of Art and Craft, Saturday, 6 p.m.

Program III will run as part of a double feature with “Catechism Cataclysm,” outdoors at the Water Tower, Sunday, 9 p.m.