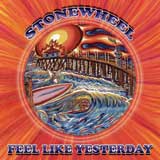 The record label name tells you a lot. Feel Like Yesterday is a fun hippie record for hippie people to listen to while doing hippie things. That’s not said with spite; no Cartman here. It’s a pleasant listen; the rock is soft but has a beat to it, the vocal harmonies fine for the genre. Put these guys down at Waterfront Park or the Water Tower with a bunch of open containers, everybody’s having a good time. The studio almost seems to contain them. They know the teachers are watching so they hold back just this much. A song like “Western Star” sounds like it would thrive on stage, allow for more imprecise vocals, a looser take; its studio counterpart bounces but seems to plod thru tempered solos. Similarly, “The Wire” could have been a barn burner; instead it’s a candle on a birthday cake.