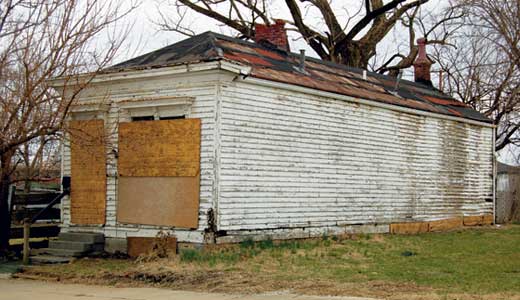 Six years after the devastation wrought by Hurricane Katrina, much of New Orleans’ historical housing stock has been destroyed, with entire neighborhoods of shotgun-style homes in complete disrepair (or worse).

As a result, the Crescent City’s distinction as the city with the highest concentration of shotgun houses — supposedly named for their layout allowing a shotgun round to pass freely from one end of the house to the other — is no more, and that torch has been passed to Louisville.

But despite the bittersweet accolade, our city’s own shotgun homes, which account for roughly 10 percent of existing housing stock, are in danger of becoming extinct for decidedly manmade reasons, according to Preservation Louisville’s 2011 Top 10 Most Endangered Historic Places List.

LEO recently caught up with the director of Preservation Louisville, Marianne Zickuhr, to discuss a new project, dubbed Preservation S.O.S., which aims to restore the city’s trove of shotguns, starting with just one, but eventually tackling them all.

LEO: Give us an overview of what the project is about.

Marianne Zickuhr: Preservation S.O.S. — standing for Save Our Shotguns — is a program that we have been working to bring to fruition for quite some time, and I’m thrilled that it’s actually happening. I will say that I’m very grateful to PNC Bank for their support of the program; very thankful to Habitat for Humanity, which is also supporting the program, along with the Metro preservation officer and the state preservation officer. It’s a great collaborative project that is bringing together many experts in order to hopefully to inspire a community and rally around a particular owner of a particular shotgun house that’s in need of some help.

Basically, we plan to do an exterior restoration project of some kind on a shotgun house that is owned (by someone who) unfortunately does not have means to care for and maintain the house.

LEO: How are people applying for this program? Are homeowners coming to you, or are you coming to them?

MZ: We have applications on our website. We’ve been talking about it on a regular basis for at least the past year, because it’s been in the works for that amount of time. I do a lot of speaking in different neighborhoods, whether a neighborhood organization or a board for a neighborhood group … and every time I’m in a neighborhood, I talk about the different things that we do, including Preservation S.O.S.

We’ve also done some very targeted outreach, because … there are certain neighborhoods that have large inventories of shotgun houses. Portland is a great example of that … I actually grew up in Portland, and there are a lot of different organizations in Portland that could benefit from this information. We’ve done a lot of talking with neighborhood groups there. We’ve reached out to several different targeted neighborhoods, where you will find (large numbers of) shotgun houses, like Germantown, Butchertown, Portland, California, Russell. We’ve been trying to get the word out pretty much any way we can.

LEO: Do you have a target completion date?

MZ: Hopefully we actually launch the project itself beginning this fall.

LEO: In your estimation, why are shotguns especially at risk in Louisville? What are the factors contributing to their being endangered?

MZ: I think it is because you will find many of these houses are sometimes in areas that have some blight, that have some lower-income, socioeconomic issues, that are causing maintenance to be cumbersome to the (homeowners). Shotgun houses are typically in older neighborhoods in the city, too. We had to try to use a program to spotlight this inventory and its importance historically, which will hopefully then … create a domino effect in showing why these people deserve this help and why these houses should be looked at as a civic asset.

Because of that, I think it almost works against the shotgun house in many of those areas because (our civic leaders) want to just remove the situation and somehow, therefore, remove unsavory behavior, which I understand. I definitely understand that. I just want to try to help give another vehicle other than demolition that can be an option to put some of these properties back on (the market) … and provide housing for people that need it.

When you look at the demolitions that happen in the city of Louisville, a large percentage of them are shotgun houses, in part due to the fact that the floor plans in these types of houses are so flexible and simple that it makes it extremely easy to tear them down.

And because it is, in my opinion, a bit of an epidemic in the city of Louisville when shotguns are a majority of the demolitions (despite being) the easiest and the cheapest to restore and put back into use, I see that as a problem. If we can try and shift our thinking and use our resources in a different way, we can hopefully turn this epidemic into a positive benefit for the city in general.

LEO: Beyond rehabilitating the first home, what’s the long view of Preservation S.O.S.?

MZ: At the end of the day, what happened to New Orleans … should have been a wakeup call to the city of Louisville. When you talk about what our civic assets are, many times people tend to glaze over some of the things they should be really glorifying.

We’ve just been talking about Whiskey Row and the fact that we have the second largest amount of cast-iron facades in the country behind SoHo in New York City. We have the largest amount of shotgun houses in the country because of what happened with Hurricane Katrina in New Orleans. Knowing the devastation that had come to them, I felt very strongly that it is Louisville’s time to stand up. It is our job to pick up the pieces and take our (position as the city) with the largest amount of these types of houses in the country and really be that beacon to educate the country and really bring it to a national scale. That’s where New Orleans had really been doing the work, and I’m so proud of everything that they’ve done. I have close ties to their preservation organizations there …

Beyond trying to get more shotguns within the city renovated, I hope that in the future what we can do is really grow this project and work with New Orleans and then together pinpoint other places within the country that have large inventories of this particular style. I’m very excited.

Applications for Preservation S.O.S. can be found at www.preservationlouisville.org.