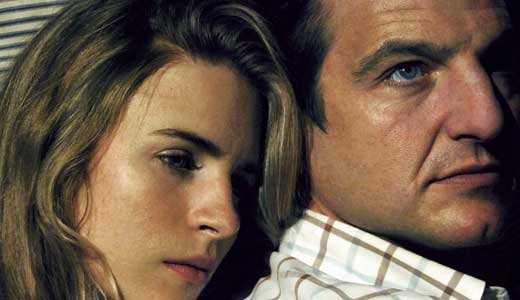 When Earth’s identical twin appears in the night sky, a tipsy astrophysicist celebrating her acceptance into M.I.T. becomes distracted and plows her car into a minivan, killing a man’s family. After a two-year prison sentence, Rhoda (Brit Marling) tracks down the bereaved John (Mapother) so that she may apologize for the accident.

When face-to-face, Rhoda cannot bring herself to reveal her identity and soon becomes entwined in a relationship with the widower. As a way of escaping from all this, Rhoda attempts to win a trip to Earth 2.

“Another Earth” asks the question, “If you could meet your other you, what would you say?” LEO had a chance to pose our own questions to two of the men who brought us this query, writer/director Mike Cahill and Louisville’s own Mapother.

“Another Earth” opens the Flyover Film Festival on Friday night at the Kentucky Center.

LEO: You can say this about most sci-fi, but I get the feeling “Another Earth” is more about life on our own planet. What does Earth 2 really symbolize?

William Mapother: I think it represents opportunity, that is to say, another chance. For Rhoda, it’s a chance for redemption. For John, it’s a chance to rewind the clock — back before his house became irredeemably messy.

Mike Cahill: The other Earth is a way of allowing all of humanity to objectively imagine themselves outside of themselves — a way of externalizing the inner monologues that we all have as humans.

LEO: William told me the entire crew could fit in a station wagon. Were there days when success at Sundance and a Fox Searchlight deal seemed outside the realm of possibility, given your resources?

MC: I am the kind of person that revels in the small successes — a single take that has true authenticity, a single cut that works. A film has thousands of edits, and every single one, to me, feels thrilling when it works. When a single person is moved, it feels like an amazing gift. So while one might fantasize about deals or a larger audience or awards or whatever, the drive of small daily successes is what really propels me.

LEO: Any standout moments from the making and promoting of “Another Earth”?

WM: About halfway through production, we were shooting a scene that wasn’t working. We took a break, rewrote it, and then resumed shooting. Stopping shooting like this is nearly unheard of. But it’s possible with a small crew and very supportive producers. And it made all the difference.

LEO: Is rolling into a strange town with a new project fun or terrifying?

MC: At first, the idea of doing a Q&A with hundreds of people — or over a thousand, in the case of Sundance — was a bit nerve racking. I like to trick my brain and replace the word “nervous” with “excited,” and then I feel all good. But actually, the dialogue with audiences has become one of my favorite parts.

LEO: Has the response differed from city to city?

MC: Of course, you get to feel the local vibe of a different city, which is fun, but for the most part, I’m realizing we’re all connected. We’ve all felt joy, anger, guilt, hope, etc. … If we had to take the film to another planet that didn’t have humans (or humanity), that would be a different story.

LEO: So, any tips then for first-time travelers to Earth 2?

WM: Buckle your seatbelt. It’ll be a bumpy visit.

LEO: William, what did you enjoy most about working with this first-time director?

WM: Mike is almost never not bouncing around like a 4-year-old, and it’s hard not to start to feel it yourself. His openness is genuine, and it creates an atmosphere of trust and willingness to experiment. Finally, he welcomed good ideas from anyone or anywhere. He was focused simply on making the best possible movie.

LEO: And Mike, what about William?

MC: In addition to being one of the most lovable, down-to-earth beings around, William takes his craft very, very seriously. I was a big admirer of William’s work. He has an intensity that we see in “Lost” or “In the Bedroom” that is (as) fear-inspiring as it is magnetic. (The character) John Burroughs is a great composer that suffers a terrible loss; he goes on a journey from darkness to light — and as such, needed the intelligence and versatility William could deliver.

LEO: Mike, are you a “sci-fi guy” or did the script for “AE” just evolve that way?

MC: I am not necessarily a “sci-fi guy,” although I do like the freedom it allows to create the impossible metaphor. One of my favorite filmmakers is Krzysztof Kieslowski, whose films such as “Double Life of Veronique” or the “Three Colors” trilogy ponder the metaphysical. Artistically, I want to explore what it means to be human through poetry — and sci-fi is a type of poetry.

LEO: Is there more sci-fi on your horizon?

LEO: William, you’re a co-founder of Flyover. Tell me about its growth so far.

WM: The growth has been organic, just what we intended. Running a festival is costly in both time and energy, and our aim is to keep that in balance with our audience. Support from local sponsors, including a very generous donation from Yum!, has been terrific. Part of our mission is to share with Louisville audiences some quality films and alternative perspectives they might not otherwise encounter. We’re doing just that.