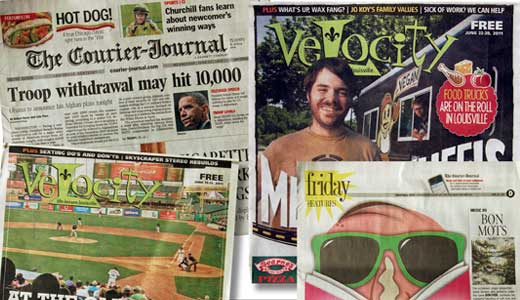 Tamara Ikenberg noticed something odd last Tuesday when she went to work at The Courier-Journal. Although Executive Editor Bennie Ivory was on furlough — all C-J employees are compelled to take unpaid time off as a budget-cutting measure — his car was there. Furloughed employees aren’t supposed to perform any work whatsoever.

Ivory, it turns out, was on hand to help deliver the bad news to 50 people who were laid off as part of a wider workforce reduction by its parent company, Gannett Co. Inc. Nationwide the layoffs totaled about 700; in Louisville, the cuts represented about 10 percent of The Courier-Journal’s workforce.

The newspaper has had other rounds of layoffs over the past couple of years, but last week’s hit the editorial department much harder: as many as two dozen editorial employees were let go. Those include Rick McDonough, an assistant editor in Neighborhoods who joined the company in 1978, and editorial writer and columnist Betty Winston Bayé, who’s been there since 1984.

The cuts were deep in Neighborhoods, zoned hyperlocal editions that are included in the Wednesday edition of the C-J, and Velocity, the free youth-oriented tabloid that started in 2003. Neighborhoods lost reporters Sheryl Edelen, Niki King and Melissa Poore, while Velocity lost editor Tom Nord, reporters Erin Keane and Joseph Lord, calendar clerk Antwon Pinkston and Lisa Hornung, who edited the paper’s related online website, MetroMix. (Nord has since been rehired to fill a non-layoff opening in the C-J’s Features department.)

Ikenberg, who has been writing about pop culture in the C-J since 2004, was laid off, as were Paula Burba, who wrote obits and features, and Amy Inskeep, a mainstay in the C-J library for at least two decades.

The layoffs raise significant questions about the C-J’s direction going forward. As the newspaper industry has struggled mightily, the paper has made much ado about the importance of intense local coverage and also reaching younger readers. Neighborhoods, the primary vehicle for that local coverage, will continue, according to publisher Arnold Garson, speaking to the C-J’s Chris Otts, but it’s unclear in what form.

The fate of Velocity is also unclear; several sources told LEO they understand a smaller version will get rolled into the C-J one day a week, but other sources suggest it will remain a standalone. That raises the question of who’ll produce it.

The same may go for the Scene, the Saturday tabloid that focuses on women’s fashion, and HerScene, a high-end standalone magazine with a similar focus. Sources say Christine Fellingham, who oversees both efforts, survived the cuts but lost two staffers.

It’s also unclear how the cuts were decided. The Wall Street Journal reported that publishers were given cost targets and were left to make those decisions. Garson and Ivory did not respond to requests for comment. Garson’s assistant said reporters are referred to the C-J’s story on the layoffs, in which Garson said the paper’s future “depends on the local economy, which hasn’t rebounded as fully as hoped. If we get a break, we’ll be fine.”

Insiders describe Tuesday as a morose day of waiting around to learn their own fate, as well as watching co-workers pack up and leave — or not having a chance to say goodbye.

Ikenberg said she got called to human resources about 4:30 p.m.; Ivory was there with an HR rep. During the short conversation she received a packet detailing her severance — laid-off employees will receive a week of salary per year worked, minus what they collect from unemployment.

“Bennie said we don’t want you to leave, none of us want to do this,” she said. “They tried to drive it home that it wasn’t merit-based, but it still makes you feel like shit.”

Keane says she got pretty much the same story.

To former and current LEO staffers, the apparent demise of Velocity would seem a triumph. After many rumors of an impending youth-focused freebie, Gannett announced the Velocity roll-out the very week LEO was sold for the first time in July 2003. Velocity hit the racks later that year.

As I recall (I was the LEO editor at that time), the new kid on the block engendered discomfort at LEO. At the least, it didn’t feel like a fair fight — akin to taking the proverbial knife to the proverbial gunfight. Velocity routinely ran 104 pages with lots of splashy color, had an editorial staff four times larger and enjoyed the advantages of vertical integration — web support, marketing support, in-house printing. Its opaque ad pricing suggested the paper was selling below cost. Not to mention an editorial vision that seemed to reduce most things to the human animal’s immutable need to party (and be seen doing so).

All in all, we were pretty sure Velocity meant to put LEO out of business. The funny thing is, Gannett is easy to criticize; actual individuals, not so much. It’s hard to gloat when talented people are kicked to the curb.

Though it might seem the changes present new opportunities for LEO Weekly, publisher Lauren Feldman didn’t want to speculate about that and said the paper will keep doing what it has been doing. In an email, she said: “LEO is an established publication in Metro Louisville (21 years), here before Velocity. We still believe that we offer the best vehicle for Arts & Entertainment coverage. Our advertisers get great exposure to our readers and our circulation has held steady. We value the integrity of our products and will continue to put forth intelligent stories and commentaries.”

Early on the C-J insisted it would never run its content in Velocity, and vice versa. That eventually changed, and it arguably helped both papers. Keane, in effect, was the C-J’s theater critic and also had a flair for literature. It remains to be seen how that void will be filled. Lord is a versatile writer who covered pop music and dining. If appealing to younger readers was/is important, cutting those two plus Ikenberg makes little sense. It also seems destined to further tax the existing Features staff and bum out artists and arts organizations that don’t get enough coverage as it is.

The cuts do seem to suggest that news and sports are the highest priorities. From news, assistant Metro editors Tiffany Meredith and Joe Taylor were laid off, as was Indiana Statehouse reporter/columnist Lesley Stedman Weidenbener. The sports department was apparently untouched.

Velocity staff photographer John Rott will reportedly be moved to the C-J’s photo department, and designers Brian Gray, Tracy Oksendahl and Joshua Thomas (who also copy edited) seem to have been absorbed into Gannett’s hub system, in which a central office designs and edits for several Gannett papers. The hub approach is one way the company has sought to cut costs.

But it’s possible Gannett is in a death spiral — stuck in a paradoxical and inexorable downward dive in which it cuts its core products to save money, then suffers public backlash, then cuts again and so on. Where that ends, no one knows. Some observers also wonder whether the C-J is profitable and whether it’s paying for the sins of its corporate brethren.

No one I spoke to for this story believes we’ve seen the last cuts at Sixth and Broadway.