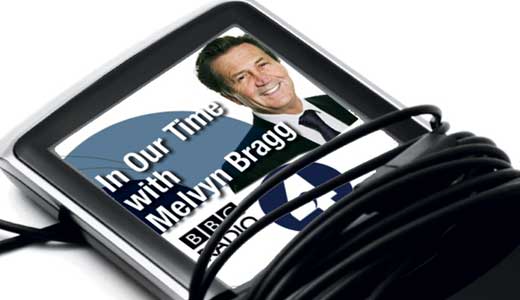 Watch out when Melvyn Bragg clears his throat. Unlike other veteran radio show hosts, Bragg won’t switch off the microphone in order to cough, cluck or otherwise clear his tonsils. He wants you to know he is there, in every dimension. He wants his guests to remember it as well, lest one of them slip off the rails.

Although Bragg has been around a long, long time, all of this noise-making does not mean the focus is on himself. Far from it. The focus, in one small but powerful increment each week, is on history, philosophy, art, science, war, religion, race, feminism, what it means to be human — from the beginning of time to right now. In other words, most of the subjects that were forbidden at your grandmother’s dinner table.

And the smarty-pants academics Bragg culls together to do his bidding? If college seminars had been like this, no one would have skipped class to get stoned and play hacky sack. Instead, they’d have smoked up and proceeded to class. Actually, now that I’ve raised the issue, I can imagine a future episode of “In Our Time” devoted to the History of Stoned Hacky Sack Playing on American College Campuses.

Several years ago, when I first noticed “In Our Time” as an option for the BBC iPlayer, I assumed it was a program devoted to Ernest Hemingway. Wrong!

Melvyn Bragg has been a fixture at the BBC since 1961 (as it happens, the year Hemingway died), but “In Our Time” was conceived only in 1998, after Bragg was forced off another radio show he ran called “Start the Week.” In the twisted logic of the BBC powers-that-be, Bragg was perceived to have a conflict of interest because he had been made a Peer in the Labour Party. So they consigned him to the hour of day considered in broadcast-land to be the death knell: 9 o’clock in the morning. The joke was on the BBC. Within months, “In Our Time” had more than a half-million live listeners and today has well over 2 million — this, of course, not counting all of those who stream or download the show from afar. Furthermore, much of the content is far more politically charged than that of “Start the Week.”

In each 45-minute installment, Bragg hosts three quick-thinking guests who have devoted their careers to the study of the subject at hand. While he is respectful of their knowledge and loves nothing better than a lively debate, he will not tolerate any kind of jargon or obfuscation. He frequently slaps the table in front of him, in sync with what he is asking a speaker to clarify: “Hold on a minute there.” Slap! “Why!” Slap! “Must we get away.” Slap! “From the nationalistic argument?” Slap! “What you’re saying makes very little sense!” Slap! Slap! He got particularly riled last December during a two-part program on the history of the Industrial Revolution.

Sometimes he gets so heated up that the listener is forced to ping over to Google Images to speculate on whether or not Bragg has had “relations” with a particular guest.

It’s hard to say which are more fun to listen to — the episodes in which the host gets testy or the episodes that are full of harmonious wonder. I have listened to some of these (the one on “The Anatomy of Melancholy,” for instance) three or four times.

The best news of all is that once you get hooked, you can go back to pick and choose from the archives — pages and pages of archives. “In Our Time” was the first BBC program to make all of its episodes available online. Each show, going back to the beginning, is just a mouse click away, easily navigable and helpfully arranged alphabetically, as well as by genre, era and year of original broadcast.