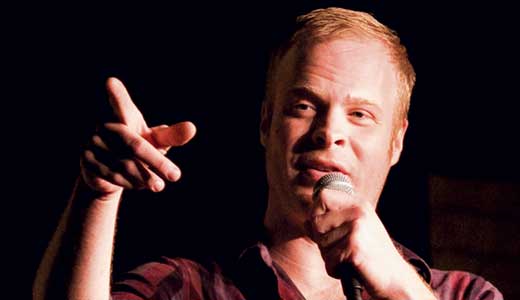 Southern Indiana native Danny Browning started his career doing open-mic shows at Comedy Caravan when he was 21, and now he’s returning to the club as a headliner. “It kinda feels like I’ve come full circle,” Browning says. Not only that, but if you buy a ticket for the 8 p.m. show on Saturday, you’ll also be invited to the club early for the release party of Browning’s new album, Happy Go Lucky.

LEO: Being a regular on the Louisville scene, how do you feel about what’s going on in comedy here?
Danny Browning: Louisville has a great comedy scene. There are a lot of comedians who live in our area who are working comics. St. Louis has a strong scene, as well. Beyond that … maybe Minneapolis has a decent scene, but I’ve been all over, and Louisville has one of the best scenes in the country.

LEO: What sets it apart from the other cities?
DB: If I sat down and thought about it, I could probably think of eight or nine full-time road guys based out of Louisville. That’s hard to find in any city. Beyond that, there’s a lot of stage time, and the comics are really helpful with each other. You don’t find that anywhere. I think that’s probably the biggest thing that sets it apart — the comics support each other, always helping one another find stage time, or if somebody has a question about something, they can come to one of us who has been doing it for a minute. I mean, it’s a competitive business, but there’s no backstabbing going on … well … minimal backstabbing going on.

LEO: Who would you most like to work with?
DB: Probably Beyoncé — she’s a lot better looking than Louis CK.

LEO: If you were a Nazi and could be any type of fruit, what would you be?
DB: I’ve never in my life had a question like that. Usually when I get asked what kind of fruit I would be, I say pineapple, so I’d have to stick with that.

LEO: The Nazi angle doesn’t change your answer?
DB: In fact, that Nazi aspect makes me wanna be a pineapple even more — because everyone gets cheered up when they see a pineapple. Maybe if Hitler had a pineapple, he wouldn’t be so pissed off all the time.

LEO: Little known fact: President George W. Bush once referred to your opening acts, C.J. Harlow and Mark Parris, as the Axis of Evil. Is that fair?
DB: And we all know that everything George Bush says is the truth. But yeah, I would say that’s fair. I think C.J. is a lot more evil than Mark, but, yes, I would definitely say that’s fair.

LEO: What is it about the Midwest that breeds so many comics?
DB: You’re right, it does breed a lot of comics. In Indiana alone, off the top of my head, we have David Letterman, Jim Gaffigan and Red Skelton. Growing up in the Midwest, you have to learn to entertain yourself a lot, and in doing that, you learn how to entertain others.

LEO: You played Rosebud in the classic 1941 film “Citizen Kane.” What was it like to work with Orson Welles?
DB: He ate like a horse and smelled funny … other than that, he was all right.