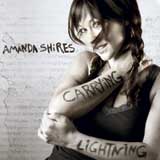 This aptly named album delivers on its promise of containing some sparks. With a nimble voice and earnest lyrics, Shires arguably offers her best work to date on Carrying Lightning. Some may recognize Shires from her recent work with Jason Isbell or her film debut as the fiddle player in Gwyneth Paltrow’s band in 2010’s “Country Strong.” However, Shires continually proves she is a force in her own right. With a trill in her voice on “Love Be A Bird,” she dispenses, daylight is forever wearing thin/not a gale or any unharnessed other wind/could move me now. The album continues in its theme of stormy circumstances and Americana tone with “Ghost Bird” and “When You Need A Train It Never Comes.” The string-driven “Kudzu” stands out as a tender offering on the album, showcasing Shires’ ability to enchant us with her honest vocals. Given her last album, West Cross Timbers, garnered affection from critics in roots music, it is likely this record will win similar praise.