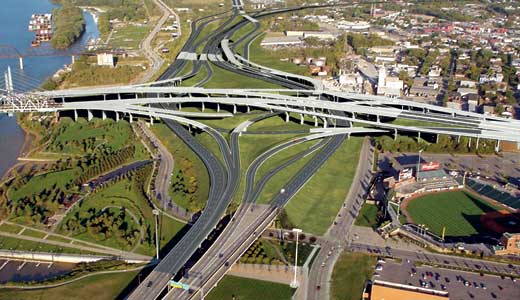 With projections of additional savings and more specific designs on the proposed reduction of the $4.1 billion Ohio River Bridges Project, elected officials last Thursday quelled some of the blazing concerns that make the project a furnace of controversy.

Flanked by Louisville Mayor Greg Fischer and a representative for Indiana Gov. Mitch Daniels, Gov. Steve Beshear detailed an updated cost analysis, which shows potential savings of $1.2 billion — $700 million more in savings than the $500 million estimated when the officials announced their downsized plan in January.

The new plan cancels the expansion of Interstate 64 over the Great Lawn of Waterfront Park, a proposal that had been rebuked as “the biggest urban planning mistake of the 21st century.”

Tyler Allen, a persistent critic of the project, hailed the announcement as “very good news.”

“It would appear that the notion is not to sacrifice our entire downtown for a 23 lane-wide interchange.”

The largest savings would result from:

•Rebuilding the downtown Kennedy Interchange (Spaghetti Junction) in place rather than moving it south to encroach on Butchertown — $800 million less;

•Eliminating flyover ramps and making other design changes on the Indiana interstate approach to the Interstate 65 bridges (the Kennedy and a new parallel span) — $215 million less; and

“Last December, Gov. Daniels, Gov. Beshear and Mayor Fischer, when they met, said, ‘Guys, it’s just too big. Cut the fat out of it.’”

Hancock, appointed by Beshear, who is running for re-election, credits the cooperation of all three leaders and singled out Fischer as “a catalyst.”

By contrast, the two anti-tolling groups (on each side of the river) credit each other and their supporters while they renew resistance to user fees on I-65. “It is very reassuring to see our elected officials responding to the will of the community,” Say No to Bridge Tolls co-founder Shawn Reilly said in a media release. “Tolls will reduce the efficiency of the transportation system and harm working families while limiting job creation in the community.”

Officials insist the project is “critical to the region’s economic future” and would create 5,000 jobs.

“We are very pleased with these new reductions, Southern Indiana’s No2BridgeTolls.org co-Founder Paul Fetter said in a written statement. “We may possibly be at a point where I-65 does not need to be tolled. We will continue our efforts until that is achieved.”

But tolling remains part of the plan. A year ago, project officials requested federal guidance on which infrastructure is eligible, but have yet to get an answer because, “They’re waiting on us,” Hancock tells LEO.

“We’re doing these detailed traffic studies to make sure we’re not diverting traffic from the Kennedy to other bridges in the area and thereby adversely affecting the purpose and need for the project,” including cross-river mobility. The federally approved tolling options will hinge on that and a separate supplemental environmental impact study, which officials hope to conclude in a year, he adds.

With the more controversial design issues addressed, the potential for tolling and a lawsuit filed jointly by the conservancy River Fields and the National Trust for Historic Preservation remain key obstacles to the project.

WHAS-TV’s Joe Arnold queried the mayor: “Have you made an effort, personally — to intervene among some of your supporters who coincide with River Fields — to get them to drop the lawsuit?”

“That process, it seems to be working itself out, and it’s evolving,” Fischer said, adding that he has not interceded.

River Fields has steadfastly pursued its lawsuit despite harsh public criticism and pressure to withdraw by Kentuckians for Progress, which now seeks to join the suit as a co-defendant — and effect its dismissal.

Hancock buttressed Fisher’s reassurance by characterizing lengthy discussions with U.S. Department of Transportation officials during a recent visit to Washington, D.C.: “They’re very confident that things will stay on course and we’ll get through this.”

Despite the optimism, some wonder whether political posturing was at play amid a gubernatorial campaign and weeks in advance of public comment.

Martina Kunnecke, of Kentuckiana’s Neighborhood Planning and Preservation Inc., says, “Thursday’s announcement makes our elected officials appear bold and proactive,” but given their propensity to grand-stand, “we await further details before joining in the jubilation … In the meantime, let’s all continue to pay attention and speak up.”