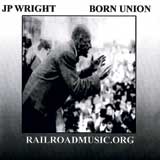 “I’m from Kentucky, not Tennessee,” declares JP Wright on “Nashville Star,” a rant against modern country pop defiantly performed in a classic country style. Louisvillian Wright isn’t just a union man in theory; he’s a member of Railroad Workers United and actually spends his days working on the rails between Louisville and Nashville, the old L&N. His songs about classic values in a mixed-up modern world gain a specificity and credibility from his real world experiences, but none of that would matter a lick if he wasn’t also a strong singer accompanied by some lovely, mournful fiddle, banjo, bass and guitar, and not much more. More of a throwback to a Roosevelt-era Okie folkie than a so-called Obama socialist (the cover photo is of Eugene V. Debs), Wright is a modern Pete Seeger, a campfire Springsteen for folks who don’t have $100 to spend on a concert ticket.