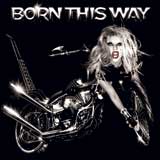 I don’t know exactly what I was expecting when I downloaded the new Lady Gaga album. But in my mind, it was something like this — the lights would grow dim, spotlights would start dancing around the room, maybe a little fog machine action, some streams of fireworks and various other pyrotechnic displays, until finally a large egg with some serious BeDazzler treatment would be lowered into my living room so that Lady Gaga herself could emerge to perform each of the 17 tracks on Born this Way. Instead, it was just music. Just songs. Infectious, catchy, dance-pop tunes, each with the energy equivalent of at least four shots of espresso, but still just songs. Whatever her talent as a musician, Gaga is first and foremost a performer, an entertainer, an experience. Unfortunately, that just doesn’t compress to the mp3 format. If I were you, Little Monsters, I’d just wait for the Lady to release her next spectacular music video. It’s the way the music was meant to be heard.