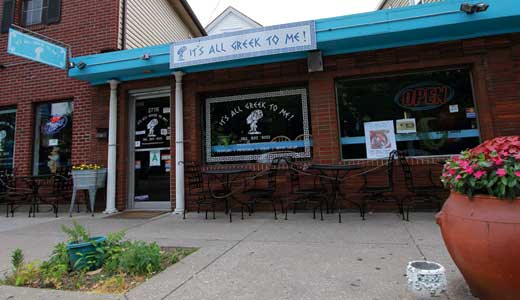 “Gyros” and “hubris” are both Greek words. “Hubris,” with its roots in Greek tragedy, means “excessive pride.” Declaring that one’s storefront Greek restaurant produces “the best gyros in the entire world” might be considered an example of this.

“Gyros” is Greek, too. It’s the iconic Greek sandwich, best when the meat is sliced thin from a chunk of lamb that roasts while turning gently on a vertical spit in front of a burner. It’s served on a pita round with onions and tomato and a slather of thick, creamy yogurt-based tzatziki sauce.

In the original Greek, “gyros” is a singular noun. One gyros, many gyroi. In this it follows the pattern of many other Greek words adopted into English: logos, ethos, kudos. Nobody earns just one kudo, and John didn’t write “In the beginning was the logo.”

But English is an evolving language. Just as we pronounce Versailles, Ky., as “Vur-SALES,” not the hoity-toity French “Vehr-SIGH,” and much as we mangle the Old Country original in foodie terms like “maitre d’” and, well, tartar sauce, we’re rapidly losing the singular “s” from “gyros” because, doggone it, it looks plural. One gyro, many gyros, and you can even pronounce it “jie-row” and the nice person behind the counter will still know what you want.

Originally a mostly take-out eatery in the Frankfort Avenue space that once housed the Wine Rack, it has grown into the next-door building vacated by Conez and Coneyz, now spruced up in bright Greek blue, with Corinthian columns, twinkling Christmas lights and Greek folk music.

It is, I believe, the fifth in a series of Greek restaurants owned and operated by Maria Bell, who started out in Radcliff, Ky., then moved in fairly quick succession to Louisville’s Butchertown, then Clifton, back to Radcliff and now to Crescent Hill.

The menu, in another act of mild hubris, brags that it is “the only Greek restaurant in Louisville,” a theory apparently built on the argument that all the other local places where you can buy gyroi, er, gyros, are run by Iranians, Turks, Palestinians, Lebanese or the random Englishwoman. Whatever.

The menu is centered, of course, on gyros. An oversize model goes for $7.50, and is available with the traditional Greek lamb or an international parade of other flavors: Italian sausage, Creole-Cajun, even Mexican-style fajita gyros. You can get chicken gyros, falafel gyros, fish gyros, vegetarian grape-leaf gyros (with yogurt-based tzatziki) or even vegan gyros (with hummus replacing the dairy). After 4 p.m. daily, the lunch lamb gyro turns into a gyro lamb sandwich ($9.99), a larger specimen attractively plated open-face, ready to attack with knife and fork.

We tried this gyro lamb sandwich and got a good portion of lamb, shaved thin from the cylinder, flavorful albeit a bit dry and salty. It was mounded on a rather thin and soft pita with a heavy slather of tzatziki as thick as sour cream, dressed with onions and chunks of plum tomato.

Choosing among other Greek entrees on the menu, I picked a favorite, moussaka ($11.99), which resembles Italian lasagna made with roasted eggplant slices in place of pasta, layered with cinnamon-scented Greek ground-beef sauce (which is the progenitor of Cincinnati chili, by the way) and topped with a thick, creamy layer of béchamel sauce baked golden. It was filling Greek comfort food, done well.

A Greek salad ($6.95) wasn’t bad, although it seemed a lot more Americanized than we used to get in Astoria, New York City’s Greek neighborhood. Romaine leaves were composed with tomatoes, Kalamata olives, cucumbers, onions and plenty of crumbled feta cheese, with a simple vinaigrette in a plastic tub on the side.

A small triangle of baklava ($2.50) fell a bit short of Astoria Greek standards as well; it was on the dry side, tough enough to be hard to get through with a fork; but its flavor was right on.

With a bottle of Greek Mythos Red beer, a dark reddish malty brew, a hearty dinner for two tipped the scales at a very affordable $24 plus change, with another five bucks for the tip jar.

More gyro or gyros
Speaking of Greek vocabulary, if you’re the kind of word pedant who considers language a great spectator sport, you can peek behind the curtains at Wikipedia to find an intriguing and lengthy debate over how the Interwebs’ encyclopedia of the commons should resolve the burning issue of “gyro” or “gyros”: http://bit.ly/gyrovsgyros.

Another all-star at Harvest
I got so busy hailing local stars Coby Ming, Josh Lehman and Cassandra Hobbic in last week’s review of Harvest that I neglected to give credit to two more team members who deserve mention: Andy McCabe, who spent more than five years at Le Relais before moving to Chicago to work in the noteworthy restaurants L2O and Blackbird, came back to Louisville to help open Harvest as its sous chef. Also, pastry chef Patty Knight is the mind behind Harvest’s seductively creative desserts.