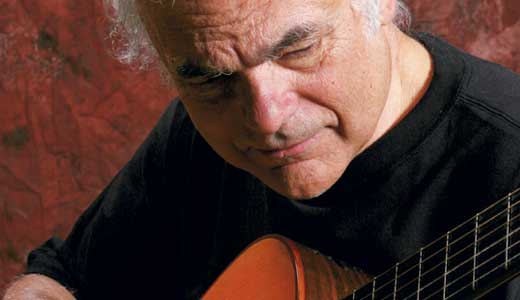 Louisville native Jimmy Raney was a leading light in modern jazz guitar; he will be honored for his contributions in celebration of Bellarmine’s Jazz Guitar Series’ 25th anniversary. In addition to a two-day clinic, Bellarmine Professor Jeff Sherman will perform in a concert featuring Gene Bertoncini and Jack Wilkins.

To his fellow guitarists, Raney was not only influential, but also a good friend. Bertoncini and Sherman discuss Raney’s influence and share their memories with LEO.

LEO: What was Jimmy Raney’s influence on modern jazz guitar?
Gene Bertoncini: His jazz lines were so flowing and so beautiful, he was a model for guys to imitate. His ideas were very fresh. His work with Stan Getz in particular was an absolute duo made in heaven. The tunes he played were quite unique; sometimes he picked an obscure Gershwin tune or something. His whole world was open to so much music … he wasn’t boxed in in any way.
Jeff Sherman: Jimmy was the complete musician. He was a jazz player (as we know, one of the most important and revered by other musicians), but he was also a great reader, knew many standard tunes, studied composition and did quite a lot of arranging. He loved classical music, especially Bach, Beethoven and Brahms. We used to say that his solos sounded like complete classical melodies that had been reworked. Jimmy inspires me to try to think in terms of “pure melody,” to try to get beyond patterns, scales and arpeggios. He said to me that you can always justify using those materials in a solo, but it doesn’t necessarily sound good.

LEO: What are some of your favorite memories of Jimmy?
GB: When I came to play at Bellarmine, it was Jimmy, Jim Hall and myself. At that time, he couldn’t really hear the music (Raney had Ménière’s disease, which caused him to lose most of his hearing over the years). We’d count off something, and he’d play whatever the tune was, and he was kind of hearing what the drums were doing … he never got lost, never did anything but play great melodies. It was so amazing, he was so in touch with what he was playing that he didn’t even have to hear it to know how good it was. It was coming from his own intuitive predisposition to playing great music. There was proof in the pudding that he was really in touch with everything he did, which is so important to a musician — to not let the instrument play them, but be really in charge.