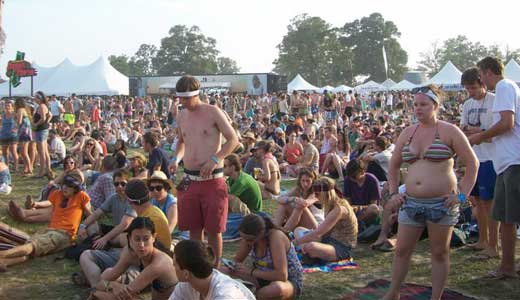 Squat now or forever hold your pee. I was presented with a moral dilemma — should I make the long trek to the Port-o-Pots where there’d inevitably be a line, or strip my shorts down to my ankles, balance myself between the tires of two cars, and let it go? I’ve relieved myself in alleys and back roads before … why was this any different? Perhaps it was because there were people around. Everywhere. Around. I couldn’t escape. And I had to pee.

Perhaps we should go back to the beginning and figure out how I ended up in a field in Tennessee with 100,000 sweaty, stoned-out people. I’ve never camped a day in my life, unless you count the forts my brothers and I used to make in the basement. I tend to shy away from places with bugs. I figure they can have the entire outside as long as I can have my house without them. They’ve agreed to this to some extent. We’re amicable. So when the Bonnaroo tickets came up for grabs at LEO earlier this year, I turned them down, choosing instead to go after Lady Gaga. And then I got to thinking … probably when I was drinking. Camping might be fun. It’s not that hot in June. I bet it would be romantic. Long story short — I won a pair, lost a paramour and totally forgot about the damn thing until last month. I was just about to throw the tickets back into the pool when my friend Kate spazzed out about the chance to go to Bonnaroo. “Oh my god, you all, it’s been my dream!” she gasped. Hesitant but willing to make dreams come true, I said, “We’re going to the ’roo!”

Which brings me to pissing in public. Hovered between two cars. Not 10 feet from fellow campers. It was only one of the many unfortunate events of that weekend. I didn’t shower for four days. When not going between two cars, I relieved myself in Port-o-Pots so hot, it smelled like someone was cooking up shit patties with a side of vomit and unidentifiable floating objects. The sun was monotonous, and there was hardly shade to be found. The walk from our campsite to the music area was about a mile … through dust, dirt and sand. And there were lines … everywhere. Lines for the potty. Lines for water. Lines for ice cream. Lines for ice. Lines for beer. Lines for the damn Ferris wheel.

On Day 2 we concocted a plan to escape to Nashville for a shower, air-conditioned hotel room and a night out on the town … in buildings with bathrooms that flushed. One problem: We were trapped. The campsite consisted of row after row of car after car and tent after tent. There was no path to squeeze out. We were stuck, and ended up being stuck till mid-afternoon on Sunday.

But instead of crying, we laughed. And drank. And I played with fungi that I bought from a nice man roaming through the crowd saying “Molly.” It was bogus … I think. I ate half the bag to get my vegetable intake for the day. Nothing happened. We met some awesome neighbors who not only shared their shade but also gave us a bite of party brownies … and cheese hot dogs. We saw great shows — which is the point of a music festival, right? I spotted two actors from “One Tree Hill” at the Jessica Lea Mayfield show. It made my day. Florence & the Machine were amazing, as were Mumford & Sons, My Morning Jacket and Eminem. The night of my botched shroom experience, I lounged in my tent listening to Arcade Fire and then Lil Wayne as they took the stage. I even caught a screening of “Footloose” in the movie tent … where I finally found shade, air conditioning and a reason to dance.

So would I do it all again? Hell no.

Drunk Texts of the Week
• When u hang upside down and look at the oven u can see hummingbirds
• I only get penis envy in port-o-potties
• I am not eating clown meat
• I am not gonna chase some lame-o minute man down
• Did u o.d. on pretty pills?