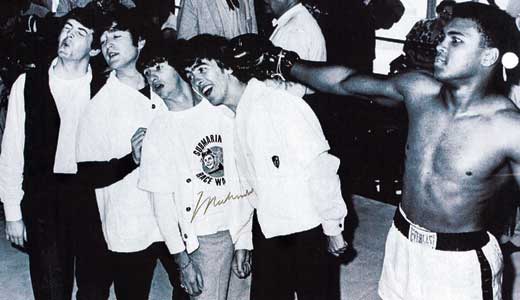 On the dimly lit fourth floor of the Muhammad Ali Center, just past the “Hopes and Dreams” wall and near the end of the “Global Voices” walkway, is a word painted in bold white letters, a word to describe the overlapping worlds of a heavyweight champion: ALIWOOD.

The center’s new multimedia exhibit highlights Ali’s interactions with other notable people, such as Jack Nicholson, Hunter S. Thompson and Hank Aaron. Dedicated to the boxer’s friendships with the famous, the exhibit is sort of ironic, because Muhammad Ali is one of the world’s biggest celebrities, says Jeanie Kahnke, vice president of communications at the Ali Center. This dual role is the beautifully executed theme of “Aliwood.”

Of the 211 photos donated by Park West Gallery of Michigan, 15 are on display. Alongside these photos are videos (such as Kevin Costner speaking about Ali at the annual Celebrity Fight Night fundraiser), QR smart-phone codes (when scanned, these codes deliver additional information about the photo directly to your phone) and quotes about Ali from celebrities who call him a friend. “You could be a writer, a dancer, and you hang out with Muhammad Ali and you became better,” said George Foreman. Through these outlets, viewers not only see Ali’s impact on his famous friends, but also Ali’s rise to his own stardom.

Of all Ali’s celebrity friends, none are more prominent in “Aliwood” than the members of The Beatles, who are shown in more photos than any other celebrities (except Ali himself, naturally). Ali’s relationship with the Fab Four is documented over time: The photos range from 1964, when The Beatles first set foot on American soil for their now-famous “Ed Sullivan Show” performance (a time during which both Ali and The Beatles were just beginning to experience stardom), to 1977, when Ali met with a tuxedo-clad John Lennon and ball gown-wearing Yoko Ono at the inauguration party for Jimmy Carter (after both celebrities had reached the peak of their fame). This, according to Lucas Marcoplos of the Ali Center’s development and communications department, is the part of the exhibit that attracts the most attention. “Five of the 100-most famous people in the world hanging out together, that’s pretty significant,” he says. In a city that hosts both a Muhammad Ali Center and an annual Beatles Festival, this relationship is particularly significant to Louisville.

The photos are not limited to Hollywood regulars, however — they also extend to the realm of Washington, D.C., highlighting Ali’s camaraderie with American presidents. He is photographed with Gerald Ford (1974), Bill and Hillary Clinton (1999), and is depicted in a canvas painting alongside President Barack Obama. The Simon Bull painting illustrates the faces of the president and the heavyweight side-by-side, looking to the viewer’s right — as if the two men are looking over the horizon and into the future.

The Derby sparked the idea for the exhibit, according to Casey Harden of the center’s communications department. The Derby brings a number of famous people to Louisville, which inspired Harden to look at Ali as a celebrity. Looking through the donated photos, she noticed there were numerous photos of Ali with other celebrities, and thus the blueprints for “Aliwood” were conceived.

The photos may center on the concept of celebrity, but they also give a multilayered perspective of Ali’s position amongst the world’s notables. He’s not only a celebrity himself, but he also gazes in on a world known only to the rich and famous. He is both an insider and an outsider — a celebrity and a celebrity acquaintance. This idea is solidified by a photo of Ali the acquaintance standing next to Ali the celebrity — it’s Ali with a giant box of Wheaties, his image plastered on the front.

“Aliwood” nicely complements other displays and fits snugly into the six core values that weave throughout the center: respect, confidence, conviction, dedication, giving and spirituality (all of which are illuminated within the photography). The striking message conveyed by the exhibit, however, is that despite the other important people he interacts with, Ali’s grandiose personality is never overshadowed; he is never the least important person in the photo.