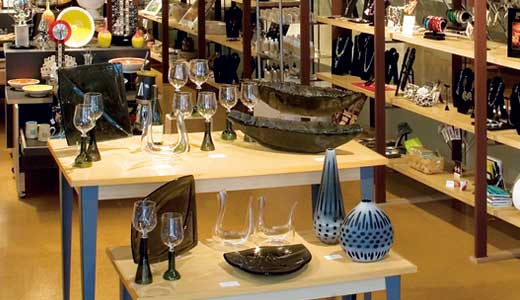 Want to know how to spot a tourist (or maybe a local taking the day off with out-of-town relatives in tow)? Just look for people swinging those little Louisville Slugger bats up and down Main Street. Since downtown has little foot traffic except during the lunch hour and after-work rush, out-of-towners make up a large percentage of the people visiting stores, like the one at the Kentucky Museum of Art and Craft (KMAC), at 715 W. Main St.

KMAC’s retail shop features high-quality crafts by more than 400 Kentucky artists (including an estimated 100 from Louisville). These handmade objects — made of clay, glass, fiber, wood and metal — celebrate something that makes Kentucky great, aside from bourbon, tobacco and horseracing, of course.

Yet it’s traditionally tourists who buy from KMAC. Locals — not so much. The latest figures, supplied by David McGuire, director of gallery sales, show the breakdown to be 75 percent out-of-towners, 25 percent Louisville Metro residents. Math is not my strong suit, but even I know this is a bit lopsided. Shouldn’t it be the other way around?

As Kentucky’s premier craft and folk art museum, advancement of functional art is KMAC’s reason for being. From the beginning, it had three tiers of promotion: exhibition, education and artist support. The latter is realized in part with the gallery store.

“I wrote 101 consignment checks for April sales,” McGuire says. “The artist gets half, with the other half going to museum programs. Every time we sell a piece, (the buyer) gets the artist’s biography or artist statement.”

“It is such a jewel, and Louisville needs to know this,” says Mary Simione, gallery sales assistant director. “Longtime residents will come in and are amazed at what we have to offer.”

KMAC just celebrated its 30th year in the Kentucky craft and folk heritage business. Former First Lady of Kentucky Phyllis George (then Brown) founded it in 1981 as the Kentucky Art and Craft Foundation. Many others, including the late Mary Norton Shands, Lois Mateus, Steve Wilson and David Mahoney, were early supporters.

In the foreword of George’s book “Kentucky Crafts: Handmade and Heartfelt,” Shands wrote: “The tradition of craft in Kentucky has a long and illustrious history, and the moment had arrived for an organization that would help bring it into focus. We had the opportunity to show and tell the Kentucky craft story to the public at large, to create a real center where people could come and see the best and most innovative crafts being produced in the state. Our audience comes to see and buy.”

After the 2001 purchase of the four-story cast-iron buildings at 715 and 717 W. Main St., the organization now known as the Kentucky Museum of Art and Craft expanded to 27,000 square feet of exhibition galleries, education space and offices. The retail shop located at street level is fortunate to have large exterior windows, giving it a great “peek-in” factor.

The shop is packed with locals during the First Friday Trolley Hops and exhibition openings. As you can imagine, they’re also busy during the lead-up to the Kentucky Derby.

On the other days, though, locals can’t seem to find the door.

“I think it’s a matter of convenience,” Simione says. “People are mall shoppers (for that reason). People who work downtown are usually gone at 5 p.m. and … just forget. I had some people in last week. I always ask, ‘Where are you from?’ and they said they were from here and that they’ve never been in before. (They worked) up the street.”

The recession notwithstanding, there are many possible causes. People might believe it costs money to visit the museum store (while there’s an admission charge to see the exhibitions — $6 for non-members, free for members — the shop is free). They might think all objects are part of the museum and not for sale. Or maybe they don’t want to deal with downtown parking (although there are ample lots, plus meters).

Ideas to get more Louisvillians through the door are being discussed, with some already in place. “We’ve now changed the entrance,” McGuire says. “717 (W. Main St.) is the main entrance. Now you come right into the store.”

There also has been some discussion about extending the shop’s hours. It’s open Monday through Friday from 10 a.m.-5 p.m. and Saturday 11 a.m.-5 p.m. “But local and out-of-town groups and individuals can ask for late hours,” McGuire adds.

KMAC is in flux, so the timing is right to make changes to the gallery shop. The museum recently announced the departure of executive director Kevin O’Brien as well as long-term deputy director/chief curator Brion Clinkingbeard. Both were asked to resign by the museum’s board of directors. The interim team includes McGuire, plus board members Daniel Maye and Martha Slaughter, who has been named the interim executive director.

“KMAC’s future is bright,” Slaughter said in a statement released by the museum. “With the support of its founders, current board members and the arts community, KMAC is positioned to significantly contribute to the regional, national and international dialogue that is taking place in the intentionally blurred intersection of craft, art and design, as well as architecture, fashion, and interior design while continuing to celebrate the strong folk and craft heritage of Kentucky.”

Phyllis George liked to talk about “the creative work of the hand.” KMAC and its museum shop are certainly proponents of that philosophy, as well as the “Keep Louisville Weird” movement.

For more information on the Kentucky Museum of Art and Craft, call 589-0102 or go to www.kentuckyarts.org.