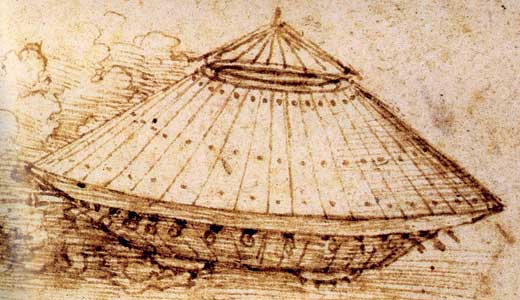 I blame the bestselling novel by Dan Brown and its blockbuster movie adaptation, “The Da Vinci Code,” for a number of misconceptions about Leonardo da Vinci (1452-1519). Start with his name. Popular culture has it as “Da Vinci,” but as an illegitimate love child, he just went by Leonardo.

For all you conspiracy theorists out there, “The Last Supper” is your — wait for it — Holy Grail. Please don’t yell at the museum employees that the figure beside Jesus in the famous painting is Mary Magdalene instead of the apostle John. Remember, the “The Da Vinci Code” is non-fiction.

The book and movie also promoted Leonardo primarily as a painter. Granted, it’s hard to dismiss “The Last Supper” and “Mona Lisa” — they’ve been icons for centuries. But he mastered many fields, including science, mathematics and music, becoming the quintessential Renaissance Man. I’ve often said that if I had to label Leonardo as just one thing, it would be “inventor.” After viewing this exhibition, I think I’ll change it to the more precise “engineer.”

“Da Vinci — The Genius” is exactly what I have been waiting for, a show that focuses on the other sides of Leonardo.

These “other sides” can be found in his codices (notebooks) full of observations, drawings and ideas that reveal the core of the man. Curiosity and nature were his teachers, resulting in page after page of mechanical drawings, anatomical studies and observational writings. It’s been estimated that he did more than 15,000 drawings alone. It makes sense that he didn’t get around to building most of this stuff.

Lucky for us, the exhibition organizers did build many of the machines found in his notebooks. It’s not often you get to touch objects in a museum, but some of the replicas are hands-on. Here’s where you learn about his interest in flight, military engineering and civil planning. There are flying machines, self-propelled cars, scuba diving equipment, a tank, machine guns — room after room of ideas to make the world more efficient.

Leonardo’s art is not forgotten, although the Frazier History Museum could not afford the travel and security expenses to show us the real things. The many reproductions featured are high quality. Information on “The Last Supper” is shown in a continuous loop video, while the in-depth analysis of the “Mona Lisa” explains that, yes, she did have eyebrows and eyelashes.

The accurately titled BBC documentary “The Man Who Wanted to Know Everything” is shown in a small theater.

Here are just a few things I learned: Leonardo was 6 feet, 6 inches tall, he chose not to sign his paintings, and it was only toward the end of his life that he finally started editing his papers.

“Da Vinci – The Genius” has traveled around the world in the last five years, but to only a handful of venues in America. It’s quite a coup for the Frazier to get it. The show is laid out in a way that complements their permanent collection while highlighting the Leonardo exhibition at the same time. That’s not an easy thing to pull off. But because of this layout, you can’t pay to just see the Leonardo show when visiting the museum.