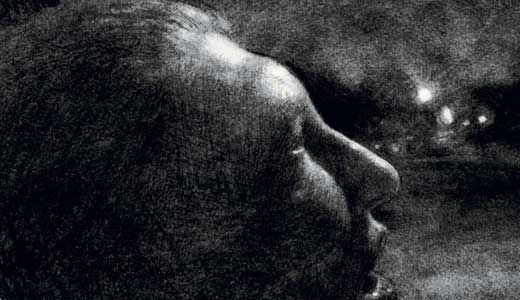 Much like the strict syllabic discipline adhered to by Haiku poets, artists Tim Lowly and Matt Ballou have devoted themselves to the use of “tondos,” or circular formats, in their most recent body of work, “The Bell, Struck,” on display at The 930 Gallery starting Friday.

Everything about this show aims to encourage slow contemplation — Ballou’s still-lifes, featuring classical and contemporary subjects like plants, iPods, skulls and bamboo strainer, evoke the traditional still-life themes of death, the fleeting nature of beauty, and the quiet forces in the world that often go unnoticed amidst the chaos of our everyday lives. An accomplished figure painter, Ballou has eschewed the active human form as subject in favor of the passive suggestion of human intervention in the arrangement and selection of objects for his still-lifes. By arranging a group of objects for aesthetic harmony, he aims to create an opportunity for contemplation in the viewer, in which their own thoughts and interpretations are brought to the forefront of their consciousness by peering into a harmonized and transcendent composition.

Lowly’s work, a continuation of his series of the last 25 years, features portraits of his daughter, Temma, who lives with severe disabilities. For Lowly, whose process in creating the portraits includes the layering of hand-drawn and PhotoShopped effects over photographs, this mixed-media method yields a product that combines the precision of technology and the idiosyncrasy of the human hand. Fascinated by the unique existence of his daughter and her relationship to the world, these portraits are meditations on unconventional ways of being. The works, which are between two and three times life size at 1 meter in diameter, envelope the viewer’s entire field of vision.

Like the Tibetan monks who create mandalas, meticulously crafted Eastern meditation aids, Lowly sees meditation as part of creating the work in addition to its intended byproduct. The title for the show was taken from a passage by Annie Dillard’s book “Pilgrim at Tinker Creek,” where she describes in a moment of quiet revelation: “I had been my whole life a bell, and never knew it until at that moment when I was lifted and struck.”

Whether those moments of realization are born out of activity or passivity, Ballou and Lowly ask us to take time to witness the evidence of theirs, which as Dillard inspired them, may serve as a catalyst for meditation and revelation in our own lives.