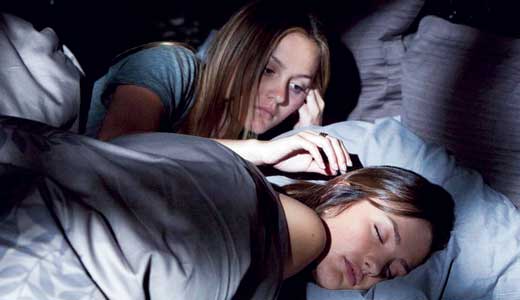 This “based on true events” howler has only two things going for it: Anthony Hopkins as a veteran exorcist and director Mikael Håfström’s keen eye for visuals. Kinda sober and quiet compared to most possession-thrillers of late, with Colin O’Donoghue as a tortured young priest sent to learn demon-busting from bored cleric Hopkins. A thinking-man’s “Exorcist” that packs a few frights but never goes off the rails.

Minka Kelly’s new roomie, Leighton Meester, is gorgeous, perky and sexy as all get out. Within a few days, the two girls have become virtual twins, right down to Leighton getting a surprise identical boob-tattoo. And by that time, Minka is certain her new roomie is screwier than a shithouse rat. Doesn’t really matter; there’s nothing about this movie that even suggests reality, so what you end up with is one of those airhead sexy-teen soaps they show on The WB. If you want the real deal, ask for “Single White Female.”

There once was a day when cities celebrated their local sports just for being part of the neighborhood. Louisville had several, including Churchill Downs before becoming CDI Properties Inc., and a baseball team where the Louisville Slugger was an actual person, not the trademark of a corporation who’ll sue you if you use that phrase. But in Chicago, they still celebrate the Cubs as their own. Local, irreplaceable and as much a part of the city as that cow that set the place on fire. This doc looks at the love of a city for its team.

First uncensored English Blu-Ray release of Dario Argento’s penultimate Giallo. After a musician witnesses a psychic’s brutal murder, he must fight for his life alongside a beautiful reporter while the black-gloved killer stalks them from the shadows.

A real sci-fi stinker from the mid ’60s, aka “Terror of the Deep.” A secret experimental underwater lab finds an alien probe on the ocean floor, complete with handy, easy-to-carry alien stuff that grows into giant Creature From the Black Lagoon-like fish monsters when you aren’t looking. The fun is in watching for all the mistakes, crappy special effects and visible microphones. Our favorite kind of movie.

Finally! After way too many years and cheezy rip-offs, we are proud to announce the Blu-Ray/Criterion release of Henri-Georges Clouzot’s original masterpiece of mystery, suspense and murder. Two women, one sickly and frail (Vera Clouzot) and the other strong and resourceful (Simone Signoret), decide to kill their callous husband/lover by drowning. But then the corpse disappears. And a detective comes nosing around. A shocking and wonderful film; oft copied, never equaled.

Patrick Troughton, one of the oddest of the old Doctor Who’s, plays an over-the-top Aztec priest in this classic British cult TV hit from the 1970s. It’s a wild mishmash of forced political marriages, war and peace, religious persecution, good vs. evil, feathered gods and human sacrifice — all with a Yorkshire accent, of course. Twelve glorious episodes, each about 25 minutes.

A brilliant doc from Peru about … us! With all our technological and intellectual sophistication, how can it be that we’ve completely overlooked the fact that we are destroying ourselves in a race for the future? Where is the balance? Where do we consider the spiritual and emotional costs of our actions? Could change your life.

A collection of star-studded cigarette commercials from back in the day when they were not only legal, but the prime sponsors of three-fourths of all TV and sports. There’s something hypnotic about seeing all these celebs puffing away, knowing so many of them died coughing up bits of lung (shudder).

Remake of the movie that made Charles Bronson a star. This time, Jason Statham plays the experienced hit man, with Ben Foster as the flippant, undisciplined student. Statham has the chops and icy stare to pull it off, though Bronson’s performance is far more chilling.

Hayden Christensen, John Leguizamo and Thandie Newton star in this wonderfully restrained mystery. After a Detroit power outage, only a scant few souls seem to remain — everyone else is gone — and the dark seems filled with the whispers of hungry shadows, bent on their consumption. Best of all, there are lots of theories, but no one seems to know what the hell is going on. We like that. Not perfect, but interesting.

This award-winning HBO special on combat stress examines why today’s military suffers the highest suicide rates in history. After looking back to the Civil War, through Vietnam, Iraq and Afghanistan, and the coining of the acronym “PTSD,” maybe we’re simply ready to accept that the killing of others is detrimental to the human soul.