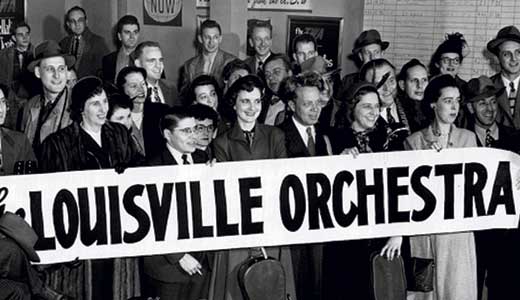 A musical love letter to Louisville. Owsley Brown and Jerome Hiler lensed this wonderful doc about the music scene in our little hometown, which was praised from coast to coast as ground zero for contemporary classical music during the mid-20th century. An electrified populace, a gifted mayor, a world-class orchestra and some of the nation’s best composers came together in a fusion of talent and civic support to create something rare and wonderful for a city that was too cheap to pay for it. With Gunther Schuller, Elliott Carter, Lukas Foss, Will Oldham, Norman Dello Joio and more.

There have been more than a dozen film treatments of this famous 1891 novella about romance, passion and the restless heart, but this is without a doubt the best. A brilliant English/French cast under the direction of Dover Kosashvili; a classic.

A tossed-off indie actioner about a werewolf-infected soldier battling the forces of evil and taking the fight to their secret stronghold deep in a haunted desert.

Are you a Nicker, or do you prefer “Billy and Mandy”? Don’t know what we’re talking about? Well then, you probably wouldn’t be interested. The entire first season, including the infamous “Lord of the Rings” episode.

Louisville lad Gus Van Sant (“Good Will Hunting”) brings together Matt Damon and Casey Affleck in a tale of … well, that’s a toughie. The two best friends each call the other “Gerry” as a running gag while they hike across the desert, straight into hell. If you’re a fan of Affleck’s work or “127 Hours,” you’ll enjoy this.

GOD WENT SURFING WITH THE DEVIL

Real-life surfer-dudes observe and comment on the bitterness and violence between Israelis and the residents of Gaza. Could we make that up?

I AM NUMBER FOUR

This noisy, flashy YA (young adult) fantasy-actioner about super-powered aliens trying to hide on our world stars Alex “Six Pack” Pettyfer and Dianna “Holy Mother of God!” Agron from “Glee.” Well, it co-stars them, anyway; everyone in this film takes a backseat to the explosions, special effects and cutting-edge soundtrack. Lotsa big dumb fun with Timothy Olyphant, way-cool flying-squirrel-dinosaurs and Teresa Palmer from “Sorcerer’s Apprentice.”

One of the all-time great movies, now available on Blu-ray. Steve McQueen and Dustin Hoffman star in the true story of Henri Charriere, who escaped the prison on France’s Devil’s Island by sheer force of will. Watch for Billy Mumy of “Lost in Space” and the “Fish Heads” song, and Victor Jory, for whom part of Actors Theatre is named.

PICASSO & BRAQUE GO TO THE MOVIES

A doc on the effect of technology on mankind in the 20th century, particularly its influence on the arts, focusing on artists Pablo Picasso and Georges Braque.

A whacked-out martial arts revenge flick starring Rina Akiyama, resplendent in black bangs and leather, wielding a razor-enhanced parasol as she hunts down her mother’s killer. For the uninitiated, Rina is famous for her appearance in Asian “gravure” magazines, winner of 2007’s International “Best Buttocks Award” and officially crowned “Bishiri no Joo” (Queen of the Beautiful Ass).

Martin Scorsese directed this ode to the amazing Fran Lebowitz (who has recently been seen as Judge Janice Goldberg in “Law & Order”) for HBO. Fran is one of the most independent, outspoken and fascinating people in a generation. Certainly today’s greatest voice on individual freedom — under constant attack by our plutocratic overlords — and last of the old guard of artist/activists that included Andy Warhol, Truman Capote and Gore Vidal. She is jarring, intelligent, abrasive, insightful and, above all, hard to disagree with.

A brutal and bloody indie ode to chainsaw killers and “Hostel” films. Stars clear-eyed beauty Rebekah Graf, Ana Ayora from “Marley & Me” and blonde babe Melissa Carnell from “Boggy Creek,” few of whom survive for a sequel.

A perfect introduction to this anime series about monsters of every shape and size who feed on the souls of the innocent — and the protective meisters who turn the tables to protect mankind. Very stylish and dark (the moon has eyes and a mouth that drips blood), yet still goofy and playful.

All four seasons of the original series on 15 discs, complete with toy commercials and oodles of bonus goodies! What more could you possibly want to know?