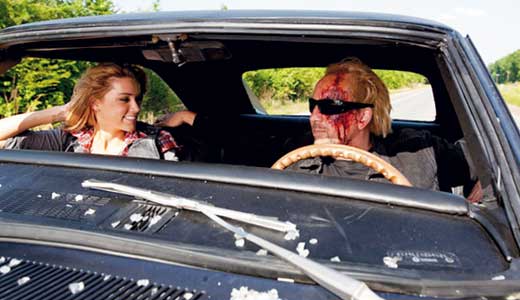 Nicolas “No Talent” Cage wears his worst toupee ever in this ode to ’70s fast cars/faster women movies. But you won’t care, because you’ll be looking at nasty Playboy Playmate Christa Campbell and Amber Heard — resplendent in her cutoff jean shorts, wanton blonde locks and bodacious ta-tas. Yow! Add Blu-ray 3-D and state-of-the-art special effects, and you got yourself a movie! Plot? What plot? Something about a crazed gunman, hot cars, kidnapped babies and gunfight-sex, sometimes all in the same scene. Gangs o’ fun.

Filmed at the Jan. 29, 2010, MusiCares Person of the Year ceremony, this contains some of the most brilliant performances we’ve ever seen. Like what? How ’bout Keith Urban, John Fogerty and Booker T. Jones doing “Rockin’ in the Free World”? Or Lady Antebellum’s wrenching “Only Love Can Break Your Heart”? Or Dave Matthews tearing up “The Needle & The Damage Done”? With a stage-list that includes Elvis Costello, Sheryl Crow, Elton John, Norah Jones, James Taylor and Crosby, Stills & Nash, this disc is a must-own. Highly recommended.

This Discovery Channel series, hosted by “Alpha Nerd” Phil Plait, is a real hoot for science geeks. Plait runs down common misunderstandings about the cosmos, trying desperately to educate and entertain while debunking bad science, in the hope that the good kind might someday save our species. Contains three 40-minute episodes: “Asteroid Apocalypse,” “Alien Attack” and “Death Stars.”

Javier Bardem stars in this Mexican tragedy about a corrupt career criminal who, in his own small way, tries to make the world a better place for his children and those around him. He can also communicate with the recently dead, which gives him a unique perspective on the value of life — especially once he is diagnosed with cancer. Not pretty, but pretty amazing.

Brian Austin Green stars in this mystical action flick as the possessor of an ancient Celtic cross that gives him superpowers in time of need. And the need is great, not just because someone is kidnapping beautiful young women from the streets of L.A., but because he’s saddled with co-stars like Jake Busey, Tom Sizemore, Michael Clarke Duncan and Vinnie Jones. Fun.

A German/Australian/French HD docudrama on the five-year voyage of Charles Darwin aboard The Beagle, where he did the meticulous research that lead to the theory of evolution. Cutting away to modern-day scientists, we hear comment on Darwin’s methods and his continued importance in science today.

Mickey Rourke adds to his list of dangerous, one-note, deadbeat characters as a washed-up jazz musician (or is that redundant?) hiding from nasty gangster Bill Murray. It seems Murray has purchased Megan Fox, a carnival sideshow attraction, and Rourke was supposed to deliver her. Instead, she falls for Rourke (or does she?) in this dark, noir-ish thriller. Possibly Fox’s best performance ever.

No, not that Mel Gibson movie. This is from Tahmineh Milani, the female Iranian director who will probably be imprisoned (again) for making such a riotous condemnation of her country’s infamous patriarchal society. A comedy-drama about a group of women who decide to get rich by scamming married men out looking for a little burqa’d tail while the wife is away. May be hard to find, but worth the effort.

Popular art-houser about a bored chambermaid who falls in love with the game of chess after watching Jennifer Beals and Dominic Gould use it as a prelude to lovemaking. (We could make a “biscuit game” reference here, but we won’t.) She begs Kevin Kline to teach her how to play, and her whole life is changed in the process.

Howard Hawks’ last film, now on Blu-ray. Similar to his “Rio Bravo” and “El Dorado,” this stars John Wayne as an ex-Civil War colonel on the trail of stolen gold and a traitor who caused the deaths of his men. With a co-star list that reads like a Hollywood Who’s Who — Jennifer O’Neill, Jack Elam, Victor French, David Huddleston, Christopher Mitchum, George Plimpton and more — this was the perfect way to wrap up one of Hollywood’s longest and most spectacular careers. Recommended.

A nine-film, 10-disc Blu-ray set with every film Kubrick made since 1960, including “A Clockwork Orange,” “Lolita” (new to Blu-Ray), “Barry Lyndon,” “Spartacus,” “Dr. Strangelove,” “2001: A Space Odyssey,” “The Shining,” “Full Metal Jacket,” and “Eyes Wide Shut” — most with terrific bonus goodies. An astonishing collection of near-perfect films for a pittance. Our highest recommendation.

A&E’s latest reality series goes into fetid swampland to find “a group of people that live on the fringes of society” — which is a nice way to say that the only way you’d want to meet them is on TV. The lost dregs of America, eking out a savage, lawless existence on homebrew, odd jobs and alligator harvesting. Watch at your peril.

A little known and largely forgotten entry from Judy Garland and Mickey Rooney. She’s a would-be singer who helps aunt Sophie Tucker tend a boarding house for jockeys. That’s where she meets Rooney, a turf-jock with a big ego. However, instead of the usual song-and-dance gaiety of these things, this one is a straight-up drama. There’s only one Garland song, the underrated “Goin’ to Town,” which is repeated in the soundtrack.