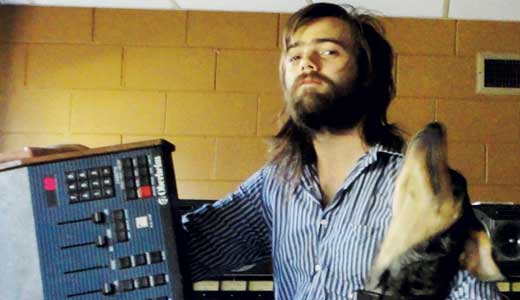 David Vandervelde has been playing music since he was 14 and gained notice for collaborations with the late Jay Bennett of Wilco. Today, the Michigan native is winning over listeners with his classic-rock attitude, delivered on an indie budget. LEO caught up with him as he neared town for a not-so-traditional Derby weekend bill with fellow rock traditionalists Buffalo Killers.

LEO: You can be a hard act to pin down. You’re on an artsy indie label, collaborate with Nashville’s Bobby Bare Jr., get compared to T. Rex and arena rock … what’s it sound like to you?
Vandervelde: I guess I do get compared to a lot of classic rock bands — Big Star, Tom Petty, Neil Young, even ELO and Fleetwood Mac on occasion. I think these are all good comparisons. I like good songs. I’m influenced mainly by ’70s rock ’n’ roll and pop music, but don’t really sound like just one specific thing. I always feel honored, in a way, to be compared to good music I’m into.

LEO: You’re a one-man band when it comes to instruments you can play. Do you find it hard to employ others to recreate your sounds for you?
V: My last full-length, Waiting for the Sunrise, was largely recorded as a band, either completely or mostly live in the studio playing in the same room. I wanted to capture more of a live kinda vibe on that record, to do something new for me. My first record, The Moonstation House Band, was recorded almost completely alone.

On my full-length work in progress, to be called Vandervelde, it’s mostly live, with the band in my basement, recorded in the analog world — no computers. I find it most enjoyable, right now, to be recording with my best friends (my band) rather than alone. Their involvement in the recording process makes everything feel more raw and real, and of course, easier to make work well live.

LEO: Downloading — good or evil?
V: No way around it, so it doesn’t really matter to me. I like buying records and tapes personally, they sound cooler and are better to look at. I have a single called “More Than You Can Feel” available for free download at www.rcrdlbl.com. It’s actually a rough mix of a song that will end up on the record this fall. I guess downloading is not evil? … But maybe I’m an evil kinda dude sometimes.

LEO: You moved to Nashville a few years ago after living in Brooklyn. How do the music scenes there compare, for you?
V: I love Nashville. More my style, I suppose. I was only in Brooklyn nine months to live with my lady friend (now my wife). It kinda bugs me when magazines like Rolling Stone and particular music blog sites refer to Nashville as having this new hip local music scene — “best in the country ’cuz we got the Black Keys and Jack White.” Truth is, they never play here. If they do, it’s maybe one or two times a year, so they’re not a part of any real local music scene at all in my mind. I like their music, but not how people make it seem like Nashville is this cool music town now that they live here. I moved here first, damn it! (laughs) I like how Nashville can seem nice and small if I want it to be.

LEO: Have you spent any quality time in Louisville? Do you have any observations about our city?
V: I’ve had really great times in Louisville — got a couple close friends there. Last time I was in town, we went to a giant thrift store that was mind-blowing! Also, your bars are open late. I would like to stay there longer than a day sometime to get more of a true feel for it. Much love for your city!