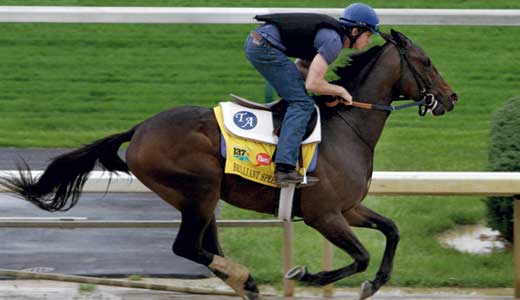 Going out on a limb.

A leap of faith.

The Derby’s wide open this year.

Clichés for sure — and we’ll probably need every one of them to get Brilliant Speed home in the 2011 Kentucky Derby.

Three weeks ago, Brilliant Speed won the Blue Grass Stakes in Lexington. But the horse has arrived at Churchill Downs without a peep of fanfare. Nobody heralded Brilliant Speed’s arrival, and the sporting press has largely ignored him over in Barn 42. Brilliant Speed will probably be 20-1 to win the 137th Run for the Roses.

But we’ll go out on a limb and pick him, anyway.

What’s the matter with the horse? Maybe plenty. Maybe nothing.

The knock on Brilliant Speed is he developed as a turf horse and ran his best race on a synthetic dirt track. Common wisdom holds that those kind of horses don’t win on the “real” dirt at Churchill Downs.

So when Brilliant Speed exploded with a terrific triumph in the Blue Grass, handicappers awarded him only an asterisk. A Polytrack horse, unlikely to win the Kentucky Derby.

But Brilliant Speed may not know that.

There is precedent. Barbaro was branded by many as merely a turf horse, with a high front leg action deemed better for jumping over weeds than skipping fast along sandy dirt tracks. But then he won the Florida Derby and romped in the 2006 Kentucky Derby.

Yeah, yeah, Barbaro might not be a good example. He was a great horse. Brilliant Speed is just a prospect.

But Brilliant Speed might also take to dirt. Bloodline usually has something to do with that, and Brilliant Speed is bred almost identically to Barbaro — both sired by Dynaformer, and both out of Raise a Native line mares. Best of all, Brilliant Speed’s pedigree suggests he will stay the Derby distance of 1 1/4 miles.

On the track this week, Brilliant Speed has looked sharp. Kind of lean and gleaming, exuding class and confidence.

One more positive for this horse is he’s ridden by Joel Rosario, a standout young California jockey whose ride on Brilliant Speed in the Blue Grass was electric.

Negatively, Brilliant Speed’s workout Monday over a sloppy track was just OK. And there’s no special buzz around the barn.

But after seeing the way Brilliant Speed flew the final three-eighths of a mile in a blistering 34 3/5 seconds to run down Twinspired in the Blue Grass, who wouldn’t be interested in making a leap of faith?

Not that Brilliant Speed sticks out. This isn’t one of those Derbies where one horse (or even two or three) stands withers and tail above the others. Indeed, almost every prep race leading up to the Kentucky Derby was won by a longshot, including Brilliant Speed, at 19-1 in the Blue Grass.

Unless Master of Hounds — the horse from Ireland — overwhelms them all with class and stamina.

This is another leap of faith that has more to do with bloodlines, since the horse has only won one race. Master of Hounds is by Kingmambo, from the Raise a Native sire line that has won 11 of the past 18 runnings of the Kentucky Derby. Beyond that, he’s out of a mare by Sadler’s Wells, long the world’s leading sire. Farther back in the Master’s bloodlines are traces of speed and stamina that add up to the stoutest stamina pedigree in this Derby.

Certainly Archarcharch and Nehro must be respected off a 1-2 finish in the Arkansas Derby. Mentioning pedigree one more time, Archarcharch is bred almost exactly like Brilliant Speed.

Stable-mate Animal Kingdom came in off a sharp victory. He might be a good one for trifectas. As would Mucho Macho Man, a sort of professional racehorse. Santa Anita Derby winner Midnight Interlude is a one-race wonder, but he looked good working at Churchill this past week. Look for Twinspired behind the speed and ahead of the closers.

Uncle Mo has an advantage in that he runs on or near the pace and can make his own destiny in the Derby. Being by speed sire Indian Charlie, though, makes him suspect on stamina.

Stay Thirsty was recently listed at 40-1 in an early Derby morning line. That’s a mistake. There’s no way a horse named Stay Thirsty will be 40-1 on Derby Day.

And, we do understand that Brilliant Speed is a longshot pick. Way out there. But, as handicapper Cary Golde once explained, “Longshots that win are winners, too. They just don’t look like it to most people.”