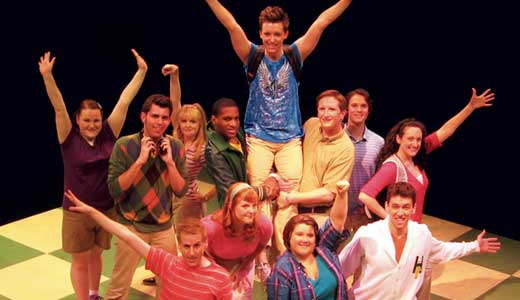 Zanna Don’t
A Pandora Productions play. Directed by Michael J. Drury. Continues through May 29 at Actors Theatre, 316 W. Main St. For tickets or more information, call 216-5502 or go to www.pandoraprods.org.

For as long as there have been stages and actors to play upon them, comedy has been concerned with subverting established authority — whether political, religious or familial. And it’s no surprise that the comedies with the broadest appeal are those that tackle that most universal theme: sexual behavior and social controls. It’s a fertile ground for comic writers, from Aristophanes (“Lysistrata”) to Shakespeare (“Taming of the Shrew”) to Mozart and Da Ponte (“Marriage of Figaro”), to the less sublime — but wildly popular — gross-out sex comedies that rule the contemporary multiplex.

And you might add to that list Tim Acito and Alexandar Dinelaris, who wrote the book, music and lyrics for the exuberantly funny 2003 musical “Zanna Don’t,” which opened last week.

Directed by Michael J. Drury for Pandora Productions, “Zanna Don’t” has all the trappings of teen musicals like “Bye Bye, Birdie,” “Grease,” “High School Musical” and “Glee,” including a smart, effervescent score steeped in pop and rock, performed nicely by a quartet under the leadership of John Spencer; hilarious production numbers, choreographed by Frank Goodloe; and outstanding costumes, designed by Donna Lawrence-Downs.

“Zanna Don’t” is set in an alternative universe where heterophobia is the norm; where books like “Heather Has One Mommy and One Daddy” are banned in school libraries; where schools and businesses close for the state high-school chess championship; where football is a secondary sport; and where all hell breaks out when the school theater company puts on a play about whether straights should be allowed in the military. And where “the love that dare not speak its name” is romance between a girl and a guy.

Presiding over this world is Zanna (Robbie Lewis), a cupid-like figure with a magic wand that casts a spell of love whenever it’s wielded. At the top of the high-school hierarchy are the two fellows slated to be king and king of the prom: chess champion Mike (Zachary Burrell) and his boyfriend, newcomer Steve (Lamont O’Neal), quarterback of the football team. Queen and queen of the prom? Feisty Roberta (played with a big voice and abundant energy by Jill Sullivan) and Kate (Lauren McCombs). There’s a bossy organizer named Candi (Sara Renauer), a put-upon minion, Arvin (Patrick Brophy), a fast-talking DJ, Tank (Ben Gierhart, who sings a stunning solo toward the end), and a slew of other characters portrayed with confident glee by an ensemble consisting of Laura Ellis, Kate Holland, J.C. Nixon and Gerald Robertson.

This is an ambitious play that requires exquisite coordination. It boasts an intricate score, loads of dancing and lots of fast-paced patter. Drury and company have everything in place to pull it off in grand style — most importantly, a fresh-faced cast with abundant vocal talent. There were moments — “Ride ’em,” a laugh-out-loud dance segment featuring the Girls’ Intramural Bull-Riding Team; “Be a Man,” a khaki-clad production number touting gay military history; a cheerleading sequence during a championship chess match; and the clever love ballad, “Don’t Ask, Don’t Tell” — when I was amazed that “Zanna” isn’t as much a part of pop culture as those other teen musicals.

Then I remembered. We don’t live in an alternative universe. But for a couple of hours, Pandora Productions certainly made it seem possible that we could.