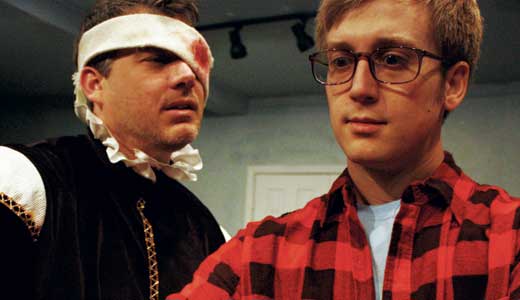 Chasing Ophelia
Directed by Scot Atkinson. Continues through May 21 at The Bard’s Town Theatre, 1801 Bardstown Road. For tickets or more information, call 749-5275 or go to www.thebardstown.com.

It’s a mystery, the relationship between writers and their fictional characters. And what we know of it is based exclusively on one-sided reports from writers — a notoriously unreliable group of folks, inasmuch as they devote much of their time to making stuff up. Some writers report their fictional characters are little more than puppets playing out a perfectly calculated string of planned events. Others claim their characters are willful, contrary creatures, quite capable of going their own way — often to the dismay and inconvenience of the author.

In due course, the first pages of a script appear. Then a few other characters. There’s Joseph (Nadeem Zaman), a mentor and guide, and Joy (Beth Tantanella), a female ingénue who may or may not be Ned’s love interest. Unlike Ned, Joseph and Joy have been around — both, it seems, have played roles before, and Joy thinks she might be the creator’s old girlfriend, since she recalls populating previous plays.

If the creator had now stuck to business, some simple, predictable romantic narrative would doubtless have transpired. But it turns out that idle characters are dangerous critters indeed. When a pile of books shows up quite mysteriously in Ned’s apartment — a pile that includes the works of William Shakespeare — all hell breaks loose. Joy decides that regardless of the creator’s intent, she’s destined to be Ophelia and is off for Hamlet’s Denmark. Ned realizes he’s in love with Joy, and despite Joseph’s counsel, he sets off in pursuit.

What follows is a laugh-filled romp through Shakespeare’s world — and it turns out that Ned and Joy’s incursion ripples through the fabric of Elizabethan narrative, yielding a rich trove of humor that alters the course of Shakespeare’s best known comedies and tragedies, invokes the wit of Tom Stoppard’s “Rosencrantz and Guildenstern Are Dead,” and makes room for a wildly funny invasion of “The Pirates of Penzance.”

Directed by Scot Atkinson, with assistance from production liaison Gwen Edwards and props master Stephanie Adams, “Chasing Ophelia” is brisk, tightly scripted and confident. And it features some fine acting. Watson’s Ned is everyman’s everyman, a mild, slightly ineffective fellow with a toolbox and, in the end, the heart of a hero. Tantanella, showing fine range in multiple roles, is effective and charming whether portraying the inchoate ingénue or the bitchy Lady Macbeth. Zaman is superb as the mentor who counsels Ned to stick to his own humble script — even as he points the way to greatness. And the three other players — Doug Schutte, Jason Cooper and Tad Timberlake — who between them take on some 18 other roles, are a delight to watch, whether they’re storming the stage as a trio of pirates, bantering about language and death as Rosencrantz and Guildenstern, or conspiring to assassinate Julius Caesar.