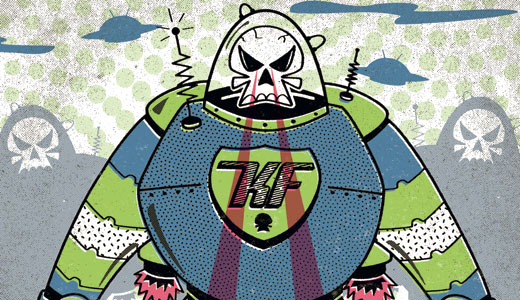 Andy Rich was a busy man in Louisville a decade ago, running the influential Initial Records label and Krazy Fest, a weekend of up-and-coming, loud and proud bands on the label or otherwise part of the scene. Rich led the festival annually from 1998 through 2003, and soon after left the Louisville music scene for a much different life.

Though his involvement with this year’s revived fest at Expo Five is more as a figurehead, LEO wanted to catch up with Rich, look back, and see how much has changed — and how little has changed — since.

Andy Rich: I believe everybody was feeling a bit nostalgic after the Endpoint reunion show back in April of 2010. Soon thereafter, Andy Tinsley called me and asked about bringing Krazy Fest back. The idea had been bandied about in the past, but I thought Andy was a good person to take up the gauntlet, as he has many great connections and a history of success when it comes to producing concerts.

LEO: What have you been doing since ’03? Do you miss running Initial Records?

AR: Initial wound down around the end of 2004, and I moved to Las Vegas. I was really into poker, and poker was starting to really take off after ESPN began airing it more frequently. I ended up getting a job with Caesars Entertainment working in the Harrah’s Las Vegas poker room. I gradually moved into management over the next few years and started running a few of the Caesars Entertainment poker rooms in Las Vegas. I eventually became operations director for the World Series of Poker. I currently run the Caesars Palace poker room, the Rio poker room and the World Series of Poker.

Running the WSOP has some parallels to what it took to pull off Krazy Fest. WSOP is all about people who love playing poker, just as Krazy Fest is all about people who love music. Both groups are quite passionate. I consider myself lucky that I’ve never had to endure a job I didn’t love. I love what I do now, just as I loved my time running Initial.

I certainly miss some aspects of running Initial. I don’t think I realized at the time how creative and brilliant some of the people I was fortunate enough to work with truly were. I miss that every day was an absolute adventure, and our potential was only limited by our imagination. On any given day, we could get our records into a new store, get an elusive chain store account, find out about one of our bands landing a great tour or getting great press — or even uncover the next great band listening to an unsolicited demo. Running Initial was certainly a fun time in my life.

LEO: Much has changed in the music business, in Louisville and in general since 1998, or even since 2003. Does Krazy Fest still mean the same thing today — to you and to attendees?

AR: I don’t think Krazy Fest means the same thing to two people. For me, it was a great personal accomplishment just to put the event together and watch it unfold. I went to my first music festival in Dayton, Ohio, and thought, “This is amazing. I can do this in Louisville.” I loved that I could help introduce thousands of people to some of the great bands I enjoyed so much. Music can play such a huge and influential role in a young person’s life.

Things were so different 15 years ago, so it was incredible to be able to see so much of what you love all at once during Krazy Fest weekend. I think it’s very different now. If you love Mastodon in 2011, you can watch 100 different videos on YouTube and buy every piece of Mastodon memorabilia in existence on the Internet. If you loved Mastodon in 2001, you had to hope they came and played in your town to see them live, or buy a T-shirt. Or you had to hope somebody had a decent VCR tape! It’s amazing how quickly things can change in 10 years.

LEO: Are events like this more important to you because of the musical acts performing, or the community aspect?

AR: It was a big deal for the community; however, without the bands, it wouldn’t have been anything, so it really was a convergence of both. We never once booked a band unless we cared about them in one capacity or another. We even turned down major label sponsorship deals, because Krazy Fest was a labor of love, and watching shitty major label bands was exactly what Krazy Fest was not about. Initial was ingrained in the Louisville scene, and we did everything we could to help promote the bands from Louisville and the city of Louisville itself. We bought ads in the local fanzines, gave booth space to local businesses and even distributed a free map of the city with all of our favorite restaurants, record stores, tattoo shops, etc., highlighted in the hopes that the out-of-town visitors would take the opportunity to see the awesomeness of ear X-tacy or the Louisville Slugger Museum. Krazy Fest was its own little economy of scale, filling up local hotel rooms and restaurants. I even heard one year that ear X-tacy had their highest sales volume of the year during Krazy Fest weekend.

LEO: How do you get the mix of emo, metal, punk, etc. to flow smoothly? How much crossover do you think there is between fans of each band or genre?

AR: Our formula for picking the bands was a combination of many factors. First, it started with the bands on the label. Next, it was bands we loved, regardless of their popularity — bands myself and the other people involved with Initial and the fest wanted to see. After that, we made sure the local bands were represented as well. It was a given that the nationally known Louisville bands would be playing, but we also made it a point to include a couple of up-and-coming bands. And finally, we had to answer the question: Who do we love that could be the headliners, our anchors? That is where you get great bands like AFI, Jimmy Eat World, Avail, Thursday, Dillinger Escape Plan and the likes. Those bands are beloved for a reason.

After that, it was filling in a few blanks. We were fortunate that, however eclectic the line-up turned out, the festival always coalesced in the end. It’s pretty incredible to look back at older flyers and see Jimmy Eat World didn’t even headline, or that Dashboard Confessional was in the middle of the day. I guess you could say that, in the end, the whole was greater than the sum of its parts.

LEO: How important was including local bands, bands that don’t have records out nationwide yet?

AR: We made it a point to include at least one band every year that was from Louisville that was not yet nationally known. I remember sets from Red Sun, Out, Skam Impaired, Pflanz and the Glasspack. It was also the coming-out party for local bands that would go on to prominence, such as National Acrobat and Christiansen. I know there were a lot more local bands that would have liked the opportunity to play, but we had limited resources to work with. The last few years, there were always pre-Krazy Fest shows and parties featuring a lot of great local bands, and we did everything we could to support their efforts. Someday, one of those bands will emerge to be the next Endpoint, Elliott or Enkindels. As long as their name started with an “E.”