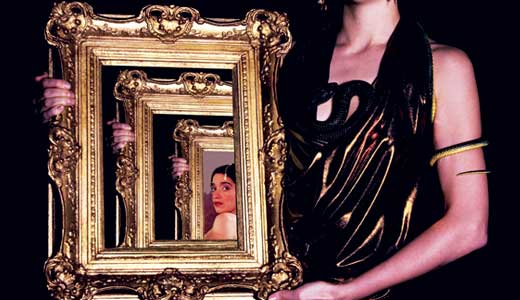 Alexis Mateo had little chance of winning “RuPaul’s Drag Race” on the Logo channel this season. The Puerto Rican native placed third on the competition series, but in my personal contest of drag queens with whom I would like to have a drink, she placed first. Mateo’s quick wit, humility and heartbreaking smile took her further in the contest than many had expected. Her build — more linebacker than anorexic — is not the type generally seen in such competitions, but her pageant background helped in areas like costuming, stage presence and charisma.

The life of the moderately successful drag queen is filled with one-nighters like this one, where the 8 p.m. door time is more optimistic than literal. Later in the weekend, Fourth Street Live will host adult film actresses Sasha Grey, Sunny Leone and Capri Anderson — but Mateo is the one lady you shouldn’t miss. —Peter Berkowitz

Land of Tomorrow gallery downtown on Broadway has not one but three new exhibits adorning its walls and halls starting Thursday. These exhibits are: “Gravity Was Everywhere Back Then” by Brent Green, an artwithoutwalls project in collaboration with Land of Tomorrow; “A Failed Entertainment: Selections from the Filmography of James O. Incandenza,” curated by Sam Ekwurtzel; and “Counterpoints: Exploration of Materials in Material Culture,” with works by Brian Harper and Ebony Patterson. An opening reception May 13 officially kicks things off at 7 p.m. with live music, food and, of course, plenty of art. Find out more at the gallery’s website. —Kevin Gibson

Ferdinand was a longshot when he was loaded into the starting gate at Churchill Downs. Two minutes later, he was a legend, winning the 1986 Kentucky Derby. At the end of his racing career, Ferdinand was shipped to a stud farm in Japan. And when he was no longer of use for breeding, the chestnut thoroughbred was slaughtered, sparking an international outcry. Thus began the nonprofit Old Friends, dedicated to rescuing racehorses from abuse, neglect and slaughter. For the second year, Ferdinand’s Ball will raise money for the organization, which cares for more than 100 rescued horses on a sprawling Kentucky farm. The soiree includes valet parking, open bar, hors d’ oeuvres, music and a silent auction. Big spenders can opt for VIP ($250) or All-Access ($500) tickets, which offer an array of bonus goodies and a chance to schmooze with celebrities, like Victoria’s Secret model Kate Upton, host of the gala. —Sarah Kelley

Assuming your ball gown is at the dry cleaner, here is a slightly more casual way to kick off a long weekend of partying: wings and beer. Now in its 21st year, the Wing Ding has become a Derby tradition, offering cheap libations and grub to the masses. Somewhere along the way, an ice-luge became part of that tradition, providing Wing Dingers with frosty-cold shots throughout the evening.

This year’s event will be held at The Bard’s Town, where revelers can gather under a large outdoor tent equipped with a beer truck, or belly up to the indoor bar. There will be live music, and the Bard will be serving up $6 baskets of wings to soak up those $2 Buds and $1 ice-luge shots. —Sarah Kelley

Have you ever seen a full boat get sucked out? Or would you like to see a top pair come through the back door? Well, you can see that and more from your favorite celebrities … and no, it’s not one of those Internet videos, either. On Thursday, the Celebrity Derby Poker party will be held at the Louisville Palace, where you can come see all of the above and more. The charity event, hosted by Denny Crum, Phil Hellmuth Jr. and Robert Williamson III, benefits both Blessings in a Backpack and The Health and Climate Foundation — which feed public school children on weekends and educate third-world countries on climate change, respectively. Poker professionals like Chris “Jesus” Ferguson and Beth Shak, celebrities like comedian Ron White and author Nora Roberts, and athletes like Paul Hornung and Corey Lanerie will be in attendance. —Brent Owen

Cincinnati’s Buffalo Killers formed in the wake of the great “The” garage rock band revival of the early aughts, but they were no mere trendy kids. The BK trio have previously toiled in Thee Shams, an underappreciated and creatively spelled band that collapsed under the weight of creative differences, changing attitudes and many long miles. The Killers’ more soulful, though still dirty, direction caught the attention and patronage of the Black Crowes, but like Jimi Hendrix and the Monkees, that led to a classic example of the opening act blowing the headliner off the stage.

Zazoo’s new showcase, the New Vintage, brings them to town with Nashville’s Vandervelde trio and Louisville’s Bad Reeds for a night of rock that promises to be truly decadent and depraved. —Peter Berkowitz

I know if you’re planning on attending Down & Derby, you’re either gonna take it easy at the track or leave room for a nap between the race and the dance floor at this annual benefit. The LGBT-friendly party is a fundraiser for the WINGS Clinic, a local HIV/AIDS facility that cares for all patients regardless of funds. This year, L.A. DJ Brynn Taylor will be spinning the tunes, and Jonathan D. Lovitz from the Logo channel’s “Setup Squad” will be mingling throughout the crowd. For the $30 admission, there’ll be appetizers from Lil Cheezers Gourmet Grilled Cheese Sandwiches and a cash bar featuring Four Roses bourbon, BBC beer and wine from HorseShoe Bend Vineyards. If you don’t feel like fooling around with cash, opt for the $250 VIP ticket that includes two admissions and an open bar. Anyone need a date? —Sara Havens

While few things are more surprising or adorable than a wall of grade-schoolers running through Thelonious Monk’s “Straight, No Chaser,” what is even more surprising is the ability the Louisville Leopard Percussionists display while doing so. Teacher Diane Downs began organizing the group in 1993, and their Derby hangover lunchtime appearances at Lynn’s have become an annual tradition. It’s a good way to bring all the fools who lost money (and/or dignity) the night before back to a civilized world, one in which ugly lamps are amongst the worst of their problems. Devoted fans know to expect LLP classics like their medley of “Oye Como Va” and War’s “Low Rider,” as well as other pop and jazz classics, awkward glances at parents in the audience and cute shout-outs to featured soloists. Fun for the whole family, unlike Derby night. —Peter Berkowitz

John Sayles — anything ever come of him since those “Piranha” and “Alligator” screenplays? Well, he eventually got his “Eight Men Out” movie made (starring the inimitable Charlie Sheen!). But as Carmichael’s Bookstore will insist, we must add that he’s become a prominent artist in American film while never giving up his earlier love of prose. The equally independent-minded folks at McSweeney’s have published Sayles’ new novel, and “A Moment in the Sun” is an epic you can settle into. Sayles can be as widescreen, Technicolor, populist and witty on the page as in his films. This handsome doorstop of a book looks into the dawn of the 20th century from the viewpoints of various American seekers and spoilers, as well as those who cross their paths or meet them at cross-purposes. Sayles will be reading and signing in an evening event where he’s introduced by one of Louisville’s own singular figures of the arts: Will Oldham, who preceded his musical career with a major role in one of Sayles’ early films. —T.E. Lyons

To start getting excited about summer’s upcoming bounty, look at Frank Weisberg’s paintings. Vegetables, fruits and flowers never looked so good. His large photorealistic still-life paintings are meticulously detailed, closely resembling the photograph from which they came.

“I use my camera to photograph my subject matter, and the photo is then used to compose my canvas,” Weisberg says. “I love color, and everything I see in the photograph must excite me. Each canvas demands careful attention to composition, color, values and scale. I became enamored with paintings that gave the illusion of depth with shadows and reflections. Many times it took almost 100 photographs to produce what I considered a real winner.” This series took him nearly nine years and yielded 19 canvases. —Jo Anne Triplett

‘Reflections of the Orchid Pavilion’

Last fall, a course in Chinese calligraphy was offered at U of L. It might sound random, but calligraphy has historical, aesthetic, cultural, social and political significance in ancient and modern Chinese culture. Students studied the five major types of Chinese calligraphy and practiced script writing, seal carving and ink painting, and a collection of their work is now on display at the Crane House, the region’s Asian cultural center. According to Crane House executive director Bryan Warren, “This exhibition, an outgrowth of our growing collaboration with U of L’s Arts and Cultural Partnership Initiative, is an exciting opportunity for students to showcase their talents and to promote the growing interest in Asian studies at the university.” The gallery is open each Tuesday, Thursday and Friday from 11 a.m. to 4 p.m. —Jane Mattingly

The art of Cuba has been highlighted in Louisville over the past several months. Another Cuban art show is at 21c Museum, providing us with an additional opportunity to acquaint ourselves with art from a relatively unknown locale. The more than 80 works are from 21c’s collection as well as other museums, private collectors and the artists themselves. The exhibition came about because 21c founders Laura Lee Brown and Steve Wilson attended the Havana Biennial in 2003. With their newfound interest in contemporary Cuban art, they began buying works in the hope of displaying them in an exhibit.