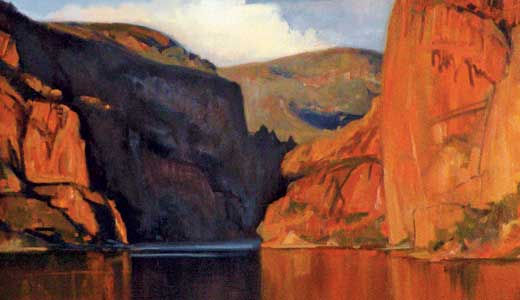 Two nights of Jonathan Richman is becoming an annual event at Germantown’s Zanzabar, but don’t wait until next year to see the cult favorite troubadour. Though Richman is now older than many of our readers’ dads, his often comical, sometimes philosophical songs are timeless, and he remains unique in a genre littered with a million lesser talents. A favorite of Conan O’Brien and a scene-stealer in “There’s Something About Mary,” Richman has released 19 solo albums since 1977, after blazing a pre-punk trail with his first band, Boston’s Modern Lovers. Today, Richman travels around the world with just a drummer, Tommy Larkin, and is best seen in smaller neighborhood clubs like this. His best songs seem simple and conversational, and cover genres from doo-wop to folk and pop, dipping occasionally into the international styles he’s learned throughout the decades. —Peter Berkowitz

While everyone else was getting buck wild during Derby week, the youngest Shakespeare virtuosos in town were hard at work, preparing for Walden Theatre’s annual Young American Shakespeare Festival. It’s a sensational line-up this year, with “Othello,” “Antony and Cleopatra” and, my personal fave, “Twelfth Night,” directed by the local classical theater trifecta of Charlie Sexton, Alec Volz and J. Barrett Cooper. So whether you’re a Shakespeare fan or you just need to sit in a dark room for a while and soak up some first-class theater that would make old Bill Shakespeare himself proud, get thine ass downtown and see one, two or all three. As Sexton reminds us, “The themes that Shakespeare explores cover the whole spectrum of human experience” — everything from war to cross-dressing. —Jane Mattingly

The Shamrock Foundation is currently taking care of Bambi, a cocker spaniel who was thrown from a moving car in Harrison County, Ind. She suffered six pelvic fractures, among other things, and is still in recovery. Friday’s Bacon Fest II, led by The Uncommon Houseflies, is being held in Bambi’s honor; proceeds from the show will go to Shamrock. So why the bacon? “Because it’s bacon, duh,” says lead singer and LEO freelancer Kevin Gibson. He also says the first 100 people get a free commemorative beer glass — and there’ll be more bacon than you can shake a stick at. The Uncommon Houseflies released Excrement Weather last year, and they’ll be debuting new songs “Space Monkey” and “Commando for Jesus” at Friday’s show. —Sara Havens

If the late, great Fred Wiche taught us anything, it’s that people love gardening. Be it flowers, vegetables, herbs … more flowers, whatever, there is a sense of accomplishment to planting, nurturing and ultimately harvesting botanical life. Not only that, but tomatoes taste good. At the 16th Annual Gardeners’ Fair and Silent Auction this weekend, all you gardeners can get your freak on with the chance to buy not only plants, but pretty much any kind of gardening tool or accessory you can imagine. Also, professionals will be on hand to answer questions and help solve your garden issues. A silent auction will serve as a fundraiser for Historic Locust Grove and will feature scores of items such as antiques, quilts, art, gift certificates and more. Might as well wear your floppy gardening hat, too; all the cool kids are wearing theirs. —Kevin Gibson

Want to feel better about your own relationship skills while partaking in uproarious laughter? Look no further than The Rudyard Kipling, where the funny folks of Le Petomane Theatre Ensemble are performing William Shakespeare’s “Twelfth Night.” In this play, the Bard offers a mix of clever wit and bawdy humor, while incorporating some classic devices of Elizabethan comedy, like mistaken identity, romantic woes, cross-dressing and a pithy servant. The six actors of Le Petomane will perform the piece with the help of 12 handmade masks, original music and several puppets. The Rud will serve food and libations throughout the show, meaning you can eat, drink and be merry as hilarity ensues onstage. Tickets are sold on a “pay-what-you-like” sliding scale from $8-$20. —Sarah Kelley

Art in the Arbor

A Louisville tradition since 1968, the Art in the Arbor Festival once again brings a host of attractions to help ease your post-Derby hangover. From live music to a wine garden, plus intriguing live demonstrations, the Plant & Pussy Willow Market, children’s crafts, food court, charity raffle and more, there is something for pretty much everyone. Most importantly, however, there is the annually juried art show, bringing together more than 100 artists across a variety of media, including jewelry, fired glass, pottery, stained glass, metal sculpture, paintings and more. Bring the family, enjoy the live demonstrations, have some food, and get the summer kicked off. Hey, Derby is over — and Art in the Arbor isn’t anything like the Infield. In a good way. —Kevin Gibson

This year’s WonderFest, now in its 22nd year, features two of the original “Star Wars” model-makers from Industrial Light and Magic, a Bond girl, comic artists and hundreds of sci-fi hobbyists. Believe it or not, WonderFest is locally produced and is the country’s largest sci-fi hobby show. Who knew Louisville had a nerdy side? Bond girl Martine Beswick (“From Russia With Love,” “Thunderball”) will be on hand, as will the “First Lady of Classic Fantasy and Horror,” Caroline Munro. Special-effects masters Lorne Peterson and Pat McClung will also be there to tell their tales about what it’s like working with George Lucas, and there’ll be more than 500 models from around the world on display. Prepare to get your geek on. —Sara Havens

Sundays are not busy days in Jewish culture, generally. So what better day is there to enjoy an afternoon full of klezmer, the Eastern European-rooted music popular among both Jewish and gentile fans of folkloric dancing? This year’s line-up brings together headliner Margot Leverett and the Klezmer Mountain Boys from New York, Iowa’s Java Jews, regional favorites The Cincinnati Klezmer Project, and locals the River City Klezmer Band, Lost Tribe, cantors David Lipp and Sharon Hordes, and Rabbi Gaylia Rooks. Those familiar with Eastern Kentucky might not be as familiar with Klezmer Mountain, but that clever name does indicate that Klezmer and bluegrass music have more in common than the casual listener might suspect. Oh, and it is a Sunday, so tailgating begins at 11 a.m. —Peter Berkowitz

D.C. folkies Vandaveer often come around to Kentucky, where singer-songwriter/lead instrumentalist Mark Charles Heidinger gets back to his roots. He and singer Rose Guerin will hit the stage in support of Dig Down Deep, which was released last month. The new record is another step forward for their uniquely poetic vision: Though many acts exploring the bounds of dream-pop and Americana embrace hazy layers of atmosphere, Vandaveer marries Heidinger’s songs to very precise arrangements. That doesn’t mean stiff chamber pieces, though: They can work the full range of dynamics up through anthemic overdubs. Heidinger recently shared with LEO that it’s an ongoing challenge to translate their maturing style with such a small onstage contingent. Louisville’s Cheyenne Marie Mize was a multi-instrumental third member on their recent European tour. But look for “The Nature of Our Kind” as just one example of how Vandaveer manages just fine as a duo. Ferraby Lionhart opens. —T.E. Lyons

After being disowned by his mother for playing the devil’s music, Chester Arthur Burnett — aka Howlin’ Wolf — grew to be a giant on the electric blues scene in 1950s Chicago. Howlin’ Wolf’s sound still echoes today, with Hall of Famers like Keith Richards citing him as a key influence. Local production company Hart-Lunsford Pictures will present a screening of “The Howlin’ Wolf Story: The Secret History of Rock and Roll” next Wednesday. The biopic kicks off Rock Docs at the Kentucky Center, a two-part film series that will also include a showing of “Throw Down Your Heart.” The 2008 film follows musician Béla Fleck as he traces the roots of the banjo back to Africa. Directed by Sascha Paladino, Fleck’s half-brother, the filmmaker’s journey succeeds in elevating the banjo from, what Fleck calls, its “white, Southern stereotype” and punctuates its importance in world music. —J. Christian Walsh

“Sculptural drawings” — these are not two words that normally go together, unless you’re discussing the preliminary process that leads to a final design, as with architectural drawings. Yet that’s what glass artist/ceramicist Alexandra Marchant calls her work. Marchant has figured out a way to make these dissimilar art processes work as one by taking multiple engraved glass “drawings” and mounting them over images painted in acrylic.

“She has a very different approach to glass,” says Flame Run owner Brook Forrest White Jr. “The pieces have a presence of their own. They are amazingly detailed. When people look at her work, you can see them just standing and getting lost in the art.” Her solo show also features her fused glass, blown glass and ceramics. —Jo Anne Triplett

Artist and gallery owner Jane Morgan loves the act of painting on location, called “plein air” in art speak. Her gallery features as many fellow “outdoorsmen” as she can fit in. Morgan’s latest exhibition features Bill Fletcher, a plein air painter from Lexington. “In Bill’s travels,” Morgan says, “he does studies of the places he visits, (such as) the streets in Vienna. (When he visits) other European cities, towns and country sites … he paints palaces (as well as) pastoral and urban scenes. He also travels in the United States and captures the beauty of the mountains in Colorado, Canyon Lake in Arizona and other beautiful landscapes in the states. However, Bill is mainly a Kentucky landscape plein air painter.” —Jo Anne Triplett