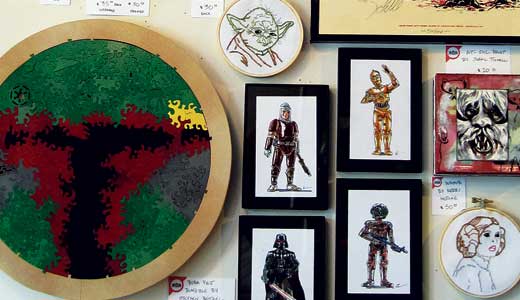 'Dark Side of the Empire' @ Ultra Pop

I have officially dubbed Marvin Dixon “The Miami Fun Machine.” I can do that, ya’ know? I have the power to assign nicknames to people on a whim. Launching his career as a radio host on one of Miami’s biggest stations has allowed Dixon to capture an eager, untapped audience. His big break in comedy came when he appeared on HBO’s “Def Comedy Jam” in the late ‘90s; his career has continued to grow, leading to roles in movies like “Trois 2” and “Bloodlines” as well as a recent gig hosting his own series of stand-up DVDs called “The Young Gunz of Comedy.” Marvin “The Miami Fun Machine” Dixon will be at The Improv this weekend, with opening act Rayzor. —Brent Owen

Memories of the Fab Four will descend upon Louisville once again this Memorial Day weekend in the form of Abbey Road on the River. Some 70 bands from all over the planet will crank out music of the Beatles and other artists of the 1960s. Highlights this year include the return of 1964, dubbed “the best Beatles tribute on earth” by Rolling Stone magazine. In addition, the music fest will stage another re-enactment of the Grammy Award-winning soundtrack from “Love,” a remix of more than 130 Beatles songs for the Cirque du Soleil Vegas show. There will be bands from Slovakia, Germany, Scotland, Puerto Rico, England and, yes, Louisville, along with plenty of Beatles swag, food and drink, and a ton of family fun. With guitars. Discounted tickets can be purchased at Kroger and each regular ticket comes with one free under-21 admission. Yeah. Yeah. Yeah. —Kevin Gibson

Blackberry Smoke is definitely as good of a band as it is a name for the weed I like to imagine they named themselves after. This Georgia-bred band’s blend of Southern rock harkens back to a day when the guys in the Marshall Tucker Band and the Allman Brothers rocked the FM airwaves. Their roots-rock sensibilities have left enough room for their Confederate freak-flag to fly while still being embraced by mainstream radio. Already, this guitar-fueled quintet has shared (or shredded) a stage alongside some of their biggest childhood heroes like Lynyrd Skynyrd and ZZ Top — and now they get to rock Louisville. Blackberry Smoke is on tour opening for the Zac Brown Band, promoting their most recent release, Little Piece of Dixie, and will be playing the KFC Yum! Center on Friday. —Brent Owen

This may be blasphemous to some, but the title of “best rap group from Kentucky” no longer seems to belong to the boys from Bowling Green. No disrespect to the brothers Nappy, but CunninLynguists — note for note, album for album — may have just chin-checked your crew via their latest offering, Oneirology. Producer Kno is a beast behind the boards. Nationally known for his Black Album mash-up, his sample-heavy production marries strong melodies with ridiculous drums. Deacon and Natti are no slouches, with their perfect balance of subject matter and delivery. Comparisons to Dungeon Family figures like Goodie Mob and Outkast are easy to draw, and not lazy, though they’re certainly tired of hearing them, as the aboveground masses have still not caught on like their Atlanta counterparts. The group plays their first Louisville show in what feels like forever at the Vernon with some of Louisville’s lesser-known hip-hop acts and tour opener Homeboy Sandman. —Damien McPherson

Strawberries are not absent from pop culture — strawberry wine, strawberry shortcake, “Strawberry Fields Forever.” For the 33rd year, we can tack the annual Strawberry Festival of Starlight, Ind., onto that list. This church fundraiser offers much to the berry lover: homegrown strawberries, a strawberry pie-eating contest, a build-your-own Strawberry Shortcake station and a variety of strawberry desserts and drinks. A buffet dinner is served throughout the day, in case you need a break from all of those berries. Live entertainment, a wine and beer garden, and carnival rides also punctuate the festival, closing with an evening of music from The Rumors. “Pretty much everyone loves strawberries, it’s hard to find someone that doesn’t,” says festival committee member Cindy Stumler. Can’t argue with that. —Brandi Terry

Pin-up girls are a classic example of glamour. Women like Bettie Page and Marilyn Monroe still continue to influence ideals of beauty, years after the height of their fame. This weekend, with the help of pin-up model and burlesque performer Go-Go Amy, women of Louisville can learn how to emulate that famous look. “Pin-up is more about telling a story than showing a lot of skin … it’s not cookie-cutter glamour,” Amy says. “It’s individualized to the model and her personality.” In her How to Be a Pin-Up Girl class, Amy will cover the basics of pin-up hair styling and makeup. The class will also cover the history of pin-up. The deluxe package includes a shoot with photographer Ryan Armbrust. The class coincides with the classic theme of the Beatersville Car and Bike Show on Sunday (see page 22 for details). —Brandi Terry

Is She Weird Is She White

Bobby Bare Jr. contains multitudes, apparently. The Nashville-based singer/songwriter/guitarist/producer, the scion of country legend Bobby Bare, is also the leader of this occasional Pixies tribute band — who just happen to be playing on the same night as ZaZoo’s Pixies tribute band, Come On Pilgrim.

Bare is accompanied on this occasion by Doni Schroader, Beth Cameron and Leah Bergman of Forget Cassettes, a raucous, underappreciated band from the same parts as Bare, and frequent collaborators. The band takes its name from the popular Pixies tune “Is She Weird,” a typically surreal and catchy number about a girl who is weird and, also, white. The rest of the set is unknown to LEO at this time, but it’d be pretty hard for a talented bunch like this to mess up some loveable Pixies songs. And how often do you get to choose Pixies cover bands by neighborhood? —Peter Berkowitz

It’s Memorial Day weekend — you don’t have to work Monday, so there’s no excuse not to make it out to — and perhaps make out at — “Poetry, Pop & Paint,” the latest performance-meets-party event by artist Divinity Rose. At the last LGBT Night at Stevie Ray’s (first Wednesday of the month), I got a chance to see Divinity entertain a small but willing crowd with her poetry, body paint and extravagant costumes. She’d be in the bathroom for an hour just to prepare for a five-minute monologue. This show should be no different — and it’ll include models, spoken-word artist Truth B. Told, comedian Raanan Hershberg and hip-hop poet Touch Armour Class. Divinity will also perform new material from her upcoming album, Doomsday Lover. —Sara Havens

‘A Touch of Pink’

First, a few sobering facts about breast cancer: One in eight women will develop the disease during her lifetime, and last year, more than 200,000 new cases were diagnosed in the United States. The good news: The overall survival rate is 89 percent, and with early detection, that number is closer to 98 percent. Local photographer Tim Valentino personalizes those facts and figures with his latest exhibit, “A Touch of Pink,” featuring breast cancer survivors. By displaying two distinct black-and-white photos of each model, Valentino attempts to illustrate the range of emotions experienced while struggling with the disease. Many of the photos include a dash of pink, which has become the de facto color in breast cancer awareness efforts. Net proceeds from the exhibit will be donated to the nonprofit Susan G. Komen for the Cure foundation. —Sarah Kelley

Bill Luster is a Pulitzer Prize-winning photojournalist worthy of a retrospective. So the Paul Paletti Gallery felt it was only right to give him one, the first time they have shown a living local artist. His photographs tell stories of American life, both large and small. He’s photographed five presidents, including Barack Obama, 45 Kentucky Derbies and the Amish. “Holmes County, Ohio, is home to the world’s largest population of Amish residents,” Luster remembers. “While on assignment for National Geographic, a colleague and I were standing on a road and we heard the clip-clop of an Amish buggy coming. As the two girls passed, we heard sounds from a boombox and the music of Prince’s ‘Purple Rain.’” The closing reception is on Tuesday, May 31, from 5-8 p.m. —Jo Anne Triplett

‘Dark Side of the Empire’

If you’re a “Star Wars” geek, there’s still time to catch the “Dark Side of the Empire” exhibit at Ultra Pop, which features paintings, screenprints and sculptures that focus on the villains from “The Empire Strikes Back.” Why just the villains from that film? Because it’s owner Paul LePree’s favorite out of the original trilogy. More than 30 artists participated in the group show, depicting characters like Boba Fett, Emperor Palpatine, Darth Vader, Storm Troopers, AT-ATs and that scary snow monster. Fingers crossed there’s a Lando Calrissian somewhere in the show — he was, after all, a traitor, right? —Sara Havens