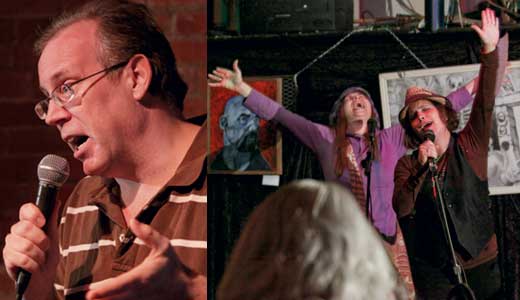 Open mics seem to exist in the ether, a remnant of Beatnik culture that still permeates through the world of live performance. They’re art for the sake of art. They’re where the greats started their careers, found their voices and made their names — names like Bob Dylan, Tom Waits and George Carlin. Open mics are the purest of live shows, where the performances are as boundless as the human imagination allows. Therefore, they never fail nor succeed beneath the weight of audience expectation.

The following is a list of the finest open mics Louisville has to offer.

Where: The Bard’s Town, 1801 Bardstown Road
When: Tuesdays, 8 p.m. Cost: Free
Type: Stand-up Comedy
Sign up: Walk-in. The list begins at the venue approximately an hour before show time.

Started by comedian Robert Morgan, this informal show gives comics a venue where they can test their most eccentric, bizarre ideas. The performers are a tight-knit bunch who work their way around the other open mics around town — but here they get away with material that might be less suitable for a proper club or larger audience. The room they use at The Bard’s Town for this particular gig is wonderful. The storefront window behind the stage creates a living backdrop for the comics. The steady rhythm of Bardstown Road traffic creates a gentle ambiance for what usually ends up being a rather crazy show. (Full bar and menu served during performances.)

Inside Comedy Caravan, the ghost of a smoke cloud hangs from the ceiling, nursing a hangover left by the 1980s. The Louisville Comedy Underground is an open-mic comedy show that began five years ago, helmed by local comedian Adam White. His intent was to not only showcase Louisville’s up-and-coming talent for an eager public, but to offer comics consistent stage-time and a safe environment to work out new material, in addition to providing an outlet for edgier material that may not work in more conventional venues. It’s raw and gritty — anything could happen at any given moment. There’s an anything-goes-aura around this evolving twice-a-week show, where you might catch a headline performer like Steve Hofstetter, Kristin Key or T.J. Miller working out new material, or see someone who has never told a joke in their lives. (Full bar during performances.)

This open mic harkens back to the coffee-shop shows of yesteryear. The Corner Door offers an intimate space for performers of all types to play in front of a quiet, supportive room that has a workshop vibe. Hosted by enchanted songstress Alanna Fugate, this young open-mic show is a place where performers of varying experience and skill sets gather as equals. “(We’re) giving a chance for songwriters to try new songs in a positive environment,” Fugate says. And while right now it’s mostly live music, Fugate hopes to expand the show to get more spoken-word performers. (Full bar and menu served during performances.)

Where: The Improv, Fourth Street Live
When: Second Wednesday of the month, 8 p.m.
Cost: $5 (free with invitation from comedians), plus a two-drink minimum
Type: Stand-up Comedy
Sign up: Before day of show, no walk-in performers allowed.

The Improv is a name of legendary proportions in the comedy industry, and this open mic offers young comics the opportunity to perform where the greats already have. The venue’s aesthetic is one of polished veneer. All the comics present their best Sunday dress when performing beneath that legendary sign, as if Godot himself might walk in at any moment. You’ll hear only the finest, proven material from each performer — sets where every joke is pulled from their quiver of solid, audience-tested punch lines. (Full bar and menu served during performances.)

Renee Ananda and Aim Me Smiley, collectively known as The Troubadours of Divine Bliss, co-host “Church on the Rocks,” a weekly showcase that’s best described as … well, when there’s a gentleman in his 50s on stage wearing black pumps, black pantyhose, a skin-tight black dress and a bobbed wig singing “American Pie,” eccentric hardly feels like the apt term. “I love this place,” Ananda says. “It just kinda steers itself.” It’s a carnival of the absurd where nothing is too far. The duo has been doing this show for more than four years, beginning at The Hideaway and finally landing at The Monkey Wrench. And over the years, The Troubadours have managed to create a room where weirdness and flaws cease to exist, and where vulnerabilities and humanness are embraced. (Full bar and menu served during performances.)

Giving musicians a regular opportunity to perform live at one of Louisville’s most storied venues is the kind of access young artists desperately need in this city. Every week, the best in local singer-songwriters are on stage at Stevie Ray’s working out new songs, preparing for upcoming shows, or just playing because they want to play. Even if you don’t sing, if you play some kind of instrument and are looking for a place to jam, this is your forum. You never know who’s going to jump on stage or when. There’s been a rotating lineup of local musicians who have run this show, and now Larry Doyle is the foreman for this weekly downtown soiree. (Full bar during performances.)