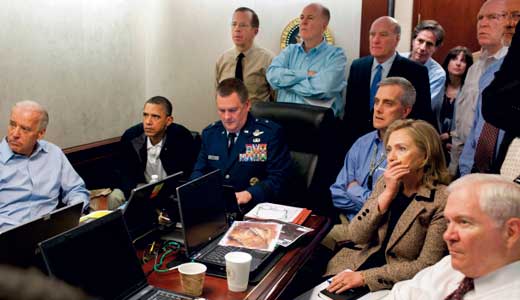 In a decade that has witnessed the terrorist attacks of Sept. 11, 2001, and the murder of its mastermind, Osama bin Laden, via a May 1, 2011, raid on his compound in Abbottabad, Pakistan, the century-long evolution of the United States from a burgeoning isolationist-minded economic power into an overtly paranoid military force suddenly congealed.

The passage of the Constitution-warping Patriot Act, “enhanced interrogation” tactics served daily at Guantanamo Bay, a global network of CIA-operated secret prisons, the absurdity of no fly-shampoo bottles and a pair of Chinese credit-fueled ground wars combined to erode sensible domestic policy at home while imploding America’s international credibility abroad — all the while resulting in the deaths of hundreds of thousands of Iraqi and Afghani civilians and nearly 6,000 U.S. soldiers, and clocking in approximately $1.1 trillion in national debt.

But now that bin Laden’s corpse is literally sleeping with the fishes, thus providing a symbolic headstone to a decade of fear and xenophobia, American foreign policy is uniquely poised to shift its major fronts on the war on terror — officially dubbed the “Overseas Contingency Operations” by Orwellian wordsmiths in the Obama administration — and possibly withdraw troops from Afghanistan and Iraq.

The question: For a nation that has been perpetually at war for the better part of 100 years, can it actually be done?

Gene Coyle, a professor of international espionage at Indiana University and a former CIA officer with more than 30 years of experience in the field, thinks bin Laden’s death provides an excellent reason to draw down the United States’ military presence in Afghanistan and refocus intelligence resources elsewhere.

“I think that this would be an excellent occasion to wrap up our involvement in Afghanistan, declare victory and come home, because we are never going to win the war in Afghanistan in any classical sense that Americans understand,” Coyle tells LEO Weekly. “The circumstances there, the tribalism, the long tradition of there being no central government, that half the people who are supposedly on our side one day are cooperating with the Taliban the next, and the fact that most everyone in the Karzai government are crooks: It’s just a no-win situation. Declare victory, come home, have a nice parade for the troops, and let Afghanistan go back to living in the 17th century where they’re all very happy.”

Although a recent report by the British newspaper The Guardian revealed that by as early as 2001 the generals acting on behalf of the Pakistani government had forged an agreement with the Bush administration to permit the use of American forces to attack terrorists living there, Coyle says President Obama is right to take credit for giving the order that led to bin Laden’s death.

“I think President Obama deserves all sorts of credit,” Coyle says. “I’m sort of happy to see that most everyone in the country, regardless of their political affiliation, is giving credit where credit’s due. When he first came to office — I keep seeing over and over on the TV now — he made this statement about how if he were to find out the location of Osama bin Laden in Pakistan, and Pakistanis weren’t going to do anything about it, then yes, he would order troops into Pakistan. And that’s exactly what he did. It’s a nice leadership moment for the president. I’m certain we’ll be reminded of this all the way to the 2012 elections.”

Yet as far as ending the war on terror, Coyle doesn’t see that happening, arguing that intelligence resources — and the vast bureaucracy created by the U.S. Department of Homeland Security — will simply find another focus, particularly in Yemen and other Middle Eastern countries coping with the democratic torrents of the so-called “Arab Spring,” which were spurred by government-toppling mass protests beginning in December of last year.

As much as those popular movements did more to instigate fledgling democracies in the Muslim world than American military might, so too does traditional military campaigning pale in comparison to the intelligence work and clandestine operations that ultimately led to bin Laden’s location and death.

“It’s pretty clear this is evidence that this is a much more effective way than the kind of Medieval approach of just throwing a lot of troops and weapons at it,” says U.S. Rep. John Yarmuth, D-3rd District. “If (killing bin Laden was) our purpose in Afghanistan — and I’m not quite clear what our purpose there is — but if in fact that’s what it is, then the killing of Osama by the SEALs shows that that’s a better way to go than spending $100 billion a year, and all of the lives lost and life-long injuries that are coming back.”

More unclear — yet no less controversial — is the role torture played in discerning the name of the al-Qaida courier who led intelligence agencies to bin Laden’s compound. The testimony of U.S. generals and a 2006 report by the National Defense Intelligence College provide ample evidence suggesting coercion (e.g. waterboarding) may have delayed efforts to locate members of al-Qaida, not hastened them.

Despite these findings, some conservatives continue to tout the benefits of enhanced interrogation techniques, aka torture. “These are not necessarily thoughtful, analytical reactions. They are partisan reactions,” Yarmuth says. “From everything I’ve read and heard and been briefed on, there were multiple sources and thousands of leads checked, and the role of enhanced interrogation was minimal at most, so I don’t think you can use that as a justification.”

Indeed, a Washington Post/Pew Research Center poll conducted less than 48 hours after the May 1 raid showed Obama’s approval ratings jumped among Democrats (+5) and independents (+10), but showed no change among Republicans.

Beyond al-Qaida in Iraq’s reactionary suicide car bombing that killed 24 policemen south of Baghdad last week in retaliation of bin Laden’s apparent martyrdom, Yarmuth says he and his colleagues on Capitol Hill believe it’s too early to tell whether the death of bin Laden will result in fewer acts of terrorism or more of them.

But he is certain of one thing: The war on terror isn’t likely to end anytime soon.

With more than 369,000 troops deployed in over 150 countries, and with upwards of 13 new U.S. military bases built in seven different countries since 9/11 — excluding the new Vatican City-sized “embassy” built by the U.S. State Department in Baghdad in 2009 — America’s presence on foreign soil is the rule, not the exception.

And it hasn’t come cheap. The wars conducted since 9/11 have cost Kentucky alone roughly $9.1 billion, a figure more than ample to plug the state’s $139 million Medicaid budget, and, according to Kentucky Jobs with Justice coordinator Attica Scott, much, much more.

“We have an opportunity to refocus on education and job creation and taking care of folks right here in the United States,” Scott says. “We’ve seen some real, tangible evidence that Kentucky is feeling the brunt (of a bad economy). As a Southern state, we’ve seen jobs leave, jobs that have gone to other countries. Even though recent numbers have shown a decrease (in unemployment), we have areas like Louisville that still show it up, and in double-digits. So let’s not waste this chance to make things right in America.”

Former CIA operative Gene Coyle will discuss espionage tactics during a forum sponsored by the World Affairs Council on May 25 at 6 p.m. at the offices of Greenebaum, Doll & McDonald, 3500 PNC Tower, 101 S. Fifth St. Tickets are $15 and can be purchased at www.worldkentucky.org.