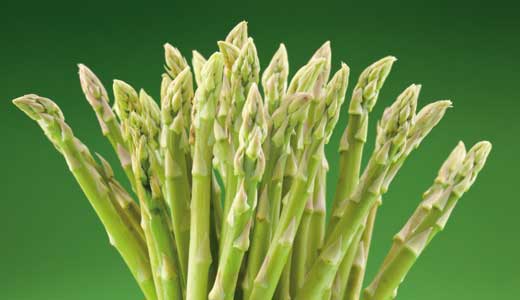 When I was a kid, I hated asparagus. I’m not sure why I turned my nose up at these delicious stalks of nutrition, but I remember my grandfather saying he didn’t like asparagus because of the way it made his urine smell. I overheard this excuse as a child, and it seemed like the perfect excuse for my own dislike. Physical side effects are not something to be argued with.

I’d like to explain what asparagus-pee smells like, but I’ve never smelled it. It turns out I don’t have the genes required to be able to smell it. That’s right … I only heard asparagus makes your pee smell funny — I never smelled the funny pee myself. This was probably due to the fact that I didn’t like the stuff at all, and therefore never ate it. Honestly, I never gave it much thought until one day I discovered I actually love asparagus. It’s delicious. And it doesn’t actually make my pee smell. Or maybe it does.

I’m not a scientist, but I’m fascinated by the idea that while some people produce stinky pee, they can’t smell it. Different studies have produced conflicting evidence, so there are many theories relating to this olfactory oddity. A few studies in the ’80s suggested that while everyone’s post-asparagus urine produces an odor, not everyone has the genes required to detect it.

Another theory is that only some people have the genes required to break down the sulfur compound that produces the odor (meaning only some people produce the odor), and that only some people carry a gene that lets them smell it. In the most recent study, researchers had people pee in a cup and sniff their own and each other’s urine and try to identify the offending samples. Some people both produced and smelled stinky urine, some could smell it in others’ urine but not their own, and some neither produced nor were able to detect asparagus pee.

What can we take away from all of this? Even if you think your shit don’t stink, if you eat asparagus, your pee might — even if you can’t smell it.

Other than being a selective assailant on one of the senses, asparagus has a lot going for it. It is one of the first spring vegetables to crop up each year, and it is a sure sign that warmer weather is to come. Asparagus is a perennial, and although the plants shouldn’t be harvested during their first couple of years, they produce prolifically after that. The delay in harvest is sometimes discouraging for home gardeners, but a good asparagus plant will produce for a dozen or more years, so it is well worth the wait.

Asparagus is balanced nutritionally and is a good source of folic acid and potassium. It also contains vitamins A, B6, C, K and thiamine. It contains fiber and protein, is low in calories and sodium, and contains no fat or cholesterol. Asparagus is rich in rutin, a bioflavonoid that protects capillaries and prevents bruising. The sulfur-containing amino acids may also help slow or prevent the spreading of warts.

The best part is, asparagus is in peak season right now. The season is short-lived, so get it while you can.

The bottom part of the asparagus stalk is woody, which can be tough or chewy. To prepare asparagus, pick up the stalk with both hands on the bottom of the stalk and bend it until it snaps off. This is the natural breaking point. The top part will be tender and usable. The bottom woody portion should be discarded. Alternatively, you can peel the bottom portion of the stalk to eliminate the tough and stringy parts.

There are many ways to cook asparagus; it can also be eaten raw in salads or as a snack with dips. The most important thing is to not overcook it, thereby depleting its nutritional value. Properly cooked asparagus should be bright green and easily pierced with a knife. Skinnier stalks will only take a few minutes; the wider ones will require a little more cooking time. Asparagus loses its sweet flavor after it is picked, so it is best consumed within a few days.

If you’re not a fan of asparagus, now is the perfect time to give it another try, while it’s fresh, local and in season. And, if you really don’t like it, maybe you should just tell people you don’t like the way it makes your pee smell — no one will ever know if you’re telling the truth.

To toast sesame seeds: In a dry skillet, heat sesame seeds until they’re fragrant and golden brown and a few of them start to pop. Set aside. Heat sesame oil on medium heat until hot, add garlic, ginger and mushrooms, and sauté for 1-2 minutes. Add the asparagus and sauté until bright green and soft, about 3-4 minutes. Stir in the tamari and then toss with toasted sesame seeds.