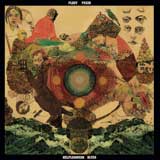 Ah, the dreaded curse of the sophomore album. When Fleet Foxes emerged, seemingly out of nowhere, in 2008 with a stunning EP and an instant-classic full-length album, they set a high bar for themselves and for their fans’ expectations. After a wait, they have returned with a follow-up that’s basically more of the same, which is both reassuring and disappointing. Part of what made their first, self-titled album so beloved was the element of surprise they were able to enjoy with their gorgeous, multi-tiered vocal harmonies and inventive song structures. Helplessness Blues suffers from a lack of inventiveness, a complacent reliance on the basics of their formula. There are few surprises. The only notable experimentation comes in “The Shrine/An Argument,” an eight-minute song whose last two minutes are tarnished by a free-jazz burst that sounds like a duck-bludgeoning. This is a perfect example of a band that might paint their masterpiece on their third album, having learned what works and what fails.