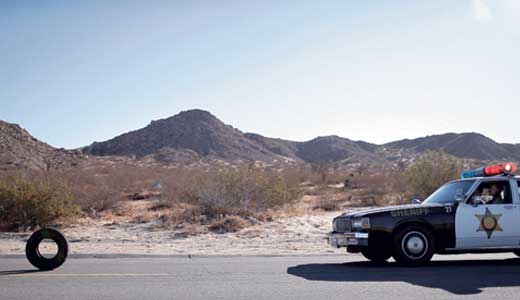 There’s a killer on the loose in the desert. Preferred method of murder? Explosions to the head. As the body count rises — along a trail of dead desert creatures and headless people — one fact is certain: This is no spree by a soulless human being; it’s a rampage by a soulless rubber tire. Huh? Exactly.

“Rubber” is the story of a discarded tire that rolls around the desert killing people … blows their heads off, actually. The tire starts small — running over a scorpion or blasting a rabbit to pieces. Perhaps you could call this practice, or perhaps these insignificant sacrifices are fueling its appetite for bigger and better targets. We buy in to non-human killers all the time — “Alien,” “Predator,” “The Blob” — so why not a tire? In fact, perhaps the entire premise of this movie is based upon … no reason at all.

“In the Steven Spielberg movie ‘E.T.,’ why is the alien brown? No reason,” says the sheriff character (Stephen Spinella) directly to the camera about three minutes into the film. “In ‘Love Story,’ why did the two characters fall madly in love with each other? No reason.” He goes on to list several more examples in an effort to make a point and set the audience up for a truly bizarre ride. “All great films without exception contain an important element of no reason,” he continues. “And you know why? Life itself is full of no reason. Why can’t we see the air around us? No reason. … Why do some people love sausages and other people hate sausages? No fuckin’ reason.” Why are you going to sit in a theater for two hours and watch a tire kill people? No reason, but some of you will.

Directed by French record producer Quentin Dupieux, aka “Mr. Oizo,” the indie comedy/horror is so absurd it’s actually watchable. The menacing tire is given enough human characteristics that you find yourself rooting for it rather than fearing it. It needs to sleep, drink and watch TV. It checks out girls taking showers and gets its feelings hurt when it doesn’t get its way. We really aren’t given much background other than it enjoys killing things — which the tire does by concentrating, shaking and emitting a sound similar to a swarm of locusts outside your window. The object of its desire then blows to pieces.

A second element to “Rubber” involves a group of people who meet out in the desert to watch the same story we’re seeing unfold through binoculars. So is what we’re seeing a false product of the group’s experience, or is there really a demon tire on the loose? My guess is that it all goes back to no reason — other than campy fun and absurd theatrics. The techno-heavy soundtrack is pretty cool, too. Don’t ask. Just enjoy.