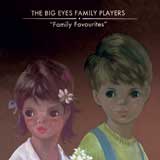 Despite carrying a hefty résumé of high-caliber collaborators over the years, The Big Eyes Family Players — a project primarily revolving around artist James Green — has operated just under the radar of notoriety during the band’s decade-long existence. The latest release is a reworked retrospective of sorts as it features old songs, new songs and covers. That might lend an immediate presumption that the record is all over the place, which is absolutely not the case. Family Favourites maintains a consistent flow throughout the duration. In fact, it took a couple of listens and a bit of homework for me to “get” that this wasn’t an album proper. The tracks on this instrumental collection range from dark ’n’ dizzy melancholia to elaborate, spirited folky songs that, at times, border on poppy. It can sound as if Jim O’Rourke and Sufjan Stevens are trying to cheer up the Dirty Three and Godspeed You! Black Emperor with dirty picture books, eliciting an occasional grin. Very cinematic music that takes you … somewhere — and it’s not always the most pleasant of places.