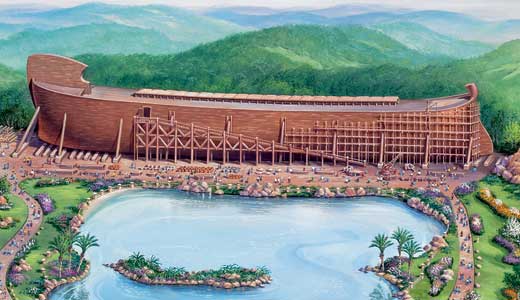 American humorist and socially conscious cowboy Will Rogers once remarked about the Old Testament flood, “Noah must have taken into the Ark two taxes, one male and one female. And did they multiply bountifully! Next to guinea pigs, taxes must have been the most prolific animals.”

Yet as far as Kentucky’s most controversial economic development project goes — not to mention its equally controversial support by Democratic Gov. Steve Beshear, who is running for re-election this fall — taxes seem to have missed the proverbial boat: The Kentucky Tourism Development Finance Authority has approved $43.1 million in tax breaks for a biblical theme park dubbed the Ark Encounter, which will feature (among other things) a 500-foot model of Noah’s Ark, a special effects-laden Tower of Babel, a working “first-century village,” and approximately nine separate retail outlets hawking Bible-themed merchandise.

In addition, the project will include “a journey in history from Abraham to the parting of the Red Sea, a walk-through aviary, a large petting zoo, and so on,” and will be “designed to be family oriented, historically authentic, and environmentally friendly,” according to its website. Legally, the Ark Encounter is listed as a for-profit limited liability corporation made up of private investors.

Of those private investors, the fundamentalist Christian nonprofit Answers in Genesis — which will oversee daily operations of the park and is the entity responsible for Northern Kentucky’s Creation Museum, which teaches that humans and dinosaurs lived in prehistoric harmony and that the Earth is roughly 6,000 years old — maintains a 20 percent share of Ark Encounter LLC.

Aside from tax breaks, the project also will benefit from $11 million in tentative road improvement monies via the Kentucky Transportation Cabinet to improve access from Interstate 75 upon the park’s expected completion in the spring of 2014.

If all goes according to plan, groundbreaking will occur as early as August 2011.

Almost immediately following the announcement last Thursday, Americans United for the Separation of Church and State threatened to sue the state if the tax rebates are found to violate the U.S. Constitution’s guarantee of separation of church and state.

“The state of Kentucky should not be promoting the spread of fundamentalist Christianity or any other religious viewpoint,” the Rev. Barry W. Lynn, executive director of Americans United, said in a statement. “Let these folks build their fundamentalist Disneyland without government help. Beshear wants to launch this ark on a sea of tax breaks — money that will ultimately have to be made up by Kentucky taxpayers. This misguided project deserves to sink. “

At a special presentation before the Kentucky Tourism, Arts and Heritage Cabinet in Frankfort last week, state officials digested the contents of a three-month, state-mandated study of the project’s potential fiscal impact on Kentucky’s economy — particularly Grant County, home of the project’s Williamstown site and to one of the highest levels of unemployment in the commonwealth.

Answers in Genesis vice president and co-founder Mike Zovath was pleased with the study’s conclusions.

“I guess I’d say we’re satisfied,” Zovath tells LEO. “It’s hard not to be satisfied … when the report said that we’d exceeded all the criteria (required by the tourism act).”

Commissioned by the cabinet and conducted by economic analysis firm Hunden Strategic Partners, the study determined the project meets the criteria outlined by the Kentucky Tourism Development Act in order to receive state subsidies, thereby permitting up to 25 percent of the Ark Encounter’s estimated $172 million in construction costs to be offset by sales tax rebates over a period of 10 years if the park meets specified attendance and sales projections after its first full year of operation.

Tourism cabinet spokesman Gil Lawson says the Ark Encounter should be treated like any other applicant seeking assistance from the state.

“This project meets all the requirements under the Tourism Development Act. It is a tourist attraction,” Lawson says. “We examined the religious issues when they applied, and determined there was no reason to turn them down. They are a for-profit company with a theme park, and they’ve applied — just like everybody else — under this incentive program, and they’ve been considered and determined to meet all the requirements of the law.”

For his part, Lawson doesn’t think tax breaks for a project that will present Bible stories as historical fact amounts to tacit support of those beliefs, much less damages the state’s reputation — even if late-night talk show hosts believe otherwise.

“Kentucky’s governor says he has no problem giving state tax incentives to a Noah’s Ark theme park,” quipped “Tonight Show” host Jay Leno in a December 2010 broadcast. “He says he’s for this because it will create jobs. I’m not sure what jobs he’s creating. I think we can rule out science teachers, OK.”

In fact, Beshear proudly stood alongside Zovath at a press conference last year and enthusiastically announced his full support of an “exciting and huge project,” at the time saying the state would commit $37.5 million in proposed tax breaks.

“Let me express why state government and local officials in not just Grant County, but also in the numerous surrounding counties, are so excited,” Beshear said at the Dec. 1, 2010, press conference. “The numbers alone tell the tale. This is a $150 million investment that is projected to create nearly 900 jobs, including almost 550 full-time jobs. In this difficult economy, these are jobs that are desperately needed.”

Beshear went on to cite numbers from a feasibility study related to the park’s economic potential despite the fact that the governor hadn’t even read the thing, which was revealed by the Lexington Herald-Leader. But no matter, because the numbers Beshear cited were from a feasibility study commissioned by Answers in Genesis prior to the state-mandated Hunden report and conducted by America’s Research Group (ARG), whose chairman, Britt Beamer, co-authored a 2009 book with AiG’s president, Ken Ham, titled “Already Gone: Why Your Kids Will Quit Church and What You Can Do to Stop It.”

Hunden’s analysis presents two different (and arguably optimistic) scenarios for Ark Encounter’s success. According to the report, “scenario A” presumes the park is “operated, programmed and advertised as a mainstream interpretation of Biblical events” and “does not promote a creationist view of Biblical events that may turn off a portion of the potential market,” as a result producing a projected first-year attendance of more than 1.24 million, generating over $100 million in revenue within a decade, and employing approximately 600 to 700 full-time employees on-site.

Then there’s “scenario B,” in which the operators of Ark Encounter would run the park in a fashion “similar to that of the Creation Museum” and would “(promote) a specific interpretation of Biblical events,” which “could turn off members of the general public.” As a consequence, this scenario would attract an estimated 373,000 fewer attendees in its first year, generate $54.1 million over 10 years, and employ 400 to 500 fewer full-time positions.

Although Scenario A would represent a better return for the state’s investment and generate far more profits for Ark Encounter’s private investors (80 percent of whom remain undisclosed), the project is by no means beholden to either scenario in order to receive tax breaks.

Zovath has told multiple media outlets that the park will pursue scenario A; however, the choice to pursue a mainstream version of Christianity within the park’s programming represents a capitulation of sorts for Answers in Genesis, most notably for Ham, whose most recent book, “Already Compromised,” chastises Christian colleges for deviating from fundamentalist “Young Earth” teachings and argues that “Christians can’t compromise God’s Word.”

So if Ark Encounter is in danger of straying from Answers and Genesis’ literal interpretation of the Bible, a burning question must be asked: Will there still be dinosaurs on the Ark?

“(We’re) not positive,” Zovath explains. “The fact that it gets so much publicity is probably a good reason to consider having (dinosaurs) on the Ark, because people write about it. Just like in the Creation Museum, we get so much press and so much publicity and so much interest in the lobby where the dinosaurs and the kids are playing together. People get interested in it, and they want to know more about it, so that could be a strong reason to include that in the Ark itself. Again, we’ve got an awful lot of exhibits, and it’s a pretty complex project, really large, as you can imagine, so we’re kind of concentrating on the big chunks and then working our way down to the specific details of each exhibit.”

For an organization that denied a perceived same-sex couple entrance to the Creation Museum’s Feb. 11 “Date Night” dinner on supposedly religious moral grounds (i.e., that homosexuality is a sin and causes indigestion among Christians), Zovath’s candid equation of dinosaurs and attendance dollars speaks volumes to AiG’s employment of doctrine as it relates to good business sense. Ark Encounter is registered as a for-profit company, after all.

And according to Answers in Genesis’ 2009 IRS tax forms (the latest year such data is available), the company raked in nearly $5.6 million in gross inventory revenue, part of which includes gift shop sales of plastic dinosaur toys, velociraptor-emblazoned “learning resources” and board games, as well as dragon toys (ala the story of St. George and the Dragon) in addition to a “Dragon Excavation Kit” (retail price $6.99), which implores children to create their own archeological dig in search of the “bones” of dinosaurs’ Medieval cousins: dragons.

“Dragon was a term that people used often to describe dinosaurs,” says Melany Ethridge, an employee of the public relations firm A. Larry Ross and spokeswoman for the Ark Encounter. “They’re not magical, mythical, fire-breathing creatures,” like the ones sold in the Creation Museum’s gift shop.

Dragons or not, the political implications of Gov. Beshear’s backing of the Ark Encounter will no doubt resound loudly this fall, where he faces Republican Kentucky Senate President David Williams in the gubernatorial election.

When asked if the governor’s support of the project was an attempt to run to the right of Williams and capture conservative Christian voters, Beshear campaign spokesman Bill Hyers bobbed and weaved.

“The governor’s support for this project is about one thing — the hundreds of jobs that analysts have predicted it will create for Kentucky,” Hyers says. “The governor is focused on creating jobs in every corner of the state — there is plenty of time to worry about the campaign in the fall.”

But if it’s about jobs, why not invest in renewable energy, which a recent United Nations panel stated could supply 80 percent of the world’s power in 40 years and, according to a 2009 Ochs Center for Metropolitan Studies report, generate $1.7 billion in economic activity and create 8,750 jobs in central and eastern Kentucky?

For that matter, since Beshear signed an executive order banning discrimination against LGBT state employees, why not aggressively push for same-sex marriage laws or a statewide fairness act, which multiple news reports suggest would spur local economies and make employment in Kentucky companies more competitive on a national scale?

Beshear spokeswoman Kerri Richardson dodged these questions, too, instead trumpeting the governor’s interest in creating — you guessed it — jobs.

“Ark Encounter is a specific project, which has been deemed eligible for incentives through a specific development act and is expected to bring hundreds of jobs to the state,” Richardson says. “Gov. Beshear is always interested in developing new projects, attracting new job sectors, and cultivating growth in our existing industries.”

With an average statewide unemployment rate hovering around 10 percent (or higher depending on the methodology used), the governor’s milquetoast stance on promoting job-creating marriage-equality legislation, and a vocal commitment to keeping the Environmental Protection Agency off the backs of coal companies, it seems the Ark Encounter — and the political support it enjoys from the highest office in Kentucky politics — is here to stay.