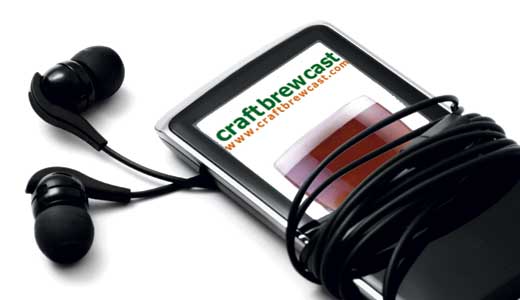 You can tell just by looking at the icons of most beer podcasts that they contain the worst of all that’s wrong with programs not mediated by public airwaves. They’re silly, long-winded and self-referential. In other words, they’re delivered by ex-frat brothers or large-gutted geezers in Hawaiian shirts (who may also be ex-frat brothers).

The fact that many of the programs run for well over an hour is a good indication that the ’casters might be a little snockered at the time of the recording. Burping in the middle of a sentence is another clue. Listening in for more than five minutes confirms the suspicion. And if that’s not enough, scroll down to the reviewer comments to see who likes a given podcast (“Awesome, dudes, I totally dig the format! Fuckin’ A!”) vs. who does not (“These two need to rein it in and realize there is more to life — and beer — than fart jokes”).

Well, it turns out there is much more to beer talk than the flatulence jokes of frat brothers. Equally important, there’s much, much more to wine talk than snobbery and phony-sounding tasting notes.

Where do we turn for some sensible, informative talk? We turn to women who waste neither their time nor ours.

First, we turn to Elizabeth Schneider, who in a mere five months has taught me more about wine than I have learned in decades of reading about it, tasting it and even writing about it. Schneider is a force to be reckoned with. As she says in her intro to each show, “I can’t stand pretense — in wine or anything else.” And what a relief that “no pretense” does not mean digestive tract jokes. Schneider, though still young, is a certified sommelier and has worked for years in the wine industry, but her goal is to keep things real and accessible.

Each half-hour episode of “Wine for Normal People” is devoted, in a focused way, to one subject. Recent programs have covered terminology differences in labeling (if you didn’t know the nuances of biodynamic vs. organic vs. sustainable, you will after a few minutes), how to get the most from the wine list in your favorite restaurants, and the Top 10 Snobby Wine Terms (Defined).

At the end of each episode, Schneider does the Grape of the Week, with helpful suggestions about how to choose the wines that best express the grape in question. She never names brands, as she is not beholden to any corporation. She produces the podcast out of her love of wine and her need to share her knowledge.

Ditto Christine Jump’s motivations. “Craft Brew Cast” was inspired by the Great American Beer Festival of 2006. Each episode features interviews with brewers at microbrew fests, breweries, pubs or other beer events. The ’cast’s subtitle is “A Modern History of American Brewing Told by the Brewers,” and that’s exactly what you get. No horsing around. Most episodes are well under a half-hour, because Jump cuts right to the chase.

Make sure not to miss the podcast from 2009 (“Cambridge Brewing”) that features women in the beer industry. In particular, you won’t want to miss the description of exactly how to let beer roll around your tongue and down your throat.

Jump has not had any new podcasts this year, but there are plenty archived at iTunes