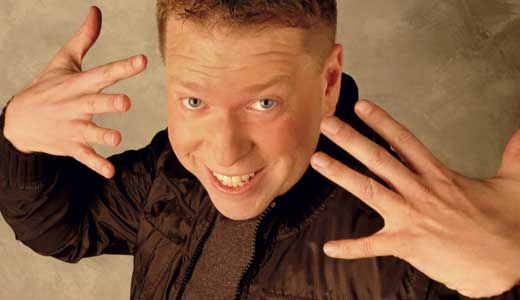 Have you ever wondered: “Who is black America’s favorite white comic?” Well, if you ask Ebony magazine (a source that should know), they would tell you it’s Gary Owen. A Navy veteran, the former host of BET’s “Comic View,” and star of “Tyler Perry’s House of Payne,” Owen worked with the Wayans brothers on the aptly named sitcom “The Wayans Bros.” and subsequently the comedy duo’s feature film “Little Man.” He’ll be at The Improv this weekend.

LEO: Are you looking forward to your stop in Louisville?
Gary Owen: Yeah … the week after Derby. I’ll probably have the most hungover show.

LEO: Have you been here before?
GO: This’ll be my second or third time in Louisville. I know I was there last year, Easter weekend. I don’t remember if I was there before that or not. I’m drawing a blank.

LEO: Any fond memories of Louisville?
GO: Yeah, last time I was there I went to the Muhammad Ali museum and the Louisville Slugger (museum) … that was kinda boring. I was there the one day they didn’t make any — goddamn. We walked around and looked at machines that wasn’t doin’ nothin’. They shoulda gave us half our money back.

LEO: When you were younger, you entered a “funniest black comedian” contest. Did you get crazy looks for being white?
GO: That’s the contest in San Diego that got me the audition for “Comic View” on BET. Keep in mind, it wasn’t steep competition. It wasn’t like the funniest black guy in Harlem, ya’ know what I mean? I knew most of the comics in the contest, because I was playing around San Diego, so I knew most of the guys. It wasn’t like I showed up and was this no-name. I mean, I was a no-name comic, but all the comics knew me. I’ll tell you who was in that contest … Nick Cannon. We used to hang out in San Diego. When we were doing stand-up, we would run around together.

LEO: Did you beat him?
GO: Yeah … I won the contest. (Laughs) It doesn’t affect him much anymore, though … I’m sure he’s still hurt over it.

LEO: After just becoming a daddy?
GO: Right. Bin Laden took all of their heat. Their publicist was like, “Dammit!”

LEO: Ebony magazine named you black America’s favorite white comedian. What did you do to earn such a prestigious title?
GO: It’s weird. When I travel, if I’m at the airport, if I’m at a mall, if I’m just out … black people know me. I’ll put it this way: If I walked through Harlem or Compton right next to Jeff Foxworthy or Larry the Cable Guy, I would get stopped. They’d look at them and be like, “Who are these guys?”