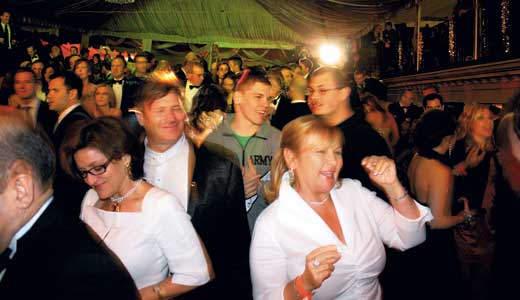 To cap off my first week back in Louisville, I snuck into the Barnstable Brown Derby Eve Gala. Does this make me an outlaw? I hope not. Legend? Nay. But it sure felt like a Derby milestone, acting as a high-heeled Dr. Livingston, ready to observe upper-crust mischief.

My motivation for this adventure? Fairness and equality. For years, the organizers of Barnstable Brown denied LEO entry to the event. Eventually, the paper lost interest and stopped trying.

It was time to right this wrong.

Our mission began at 11 p.m. — early enough for the Grey Goose to induce slippery behavior, late enough for weary security guards not to question a lady and her man sidling around a barricade with their eyes laser-focused on the prize — a throbbing dance floor with a crowd maniacally singing along with “Money (That’s What I Want).”

Had anyone stopped us, I would’ve come clean: “I’m with LEO … No, I’m not invited.” But no one asked, and before I knew it, we were shoulder to shoulder with a Doublemint twin surveying the Kentucky corn pudding in the buffet line and meeting a man bursting with news of Taylor Dayne’s presence. Over my shoulder, Larry Birkhead draped himself over two spindly women, a bronzed baby face between bountiful chests. Yes. We were in.

Five years ago, I went to Barnstable Brown, properly. I was a local television reporter at the time and got corralled in with other press to interview a string of celebrities whose fame, on a scale of 1-10, hovered around 98 Degrees. That boy band’s most famous member, Nick Lachey, was among the headliners. I do remember a radiant Darryl Isaacs making his way in, and my subsequent boundless joy at being able to announce the arrival of the Heavy Hitter himself.

So last Friday evening, my husband and I headed to the front porch so we could witness the bustle of this year’s red carpet.

We walked through a living room steeped in a marijuana haze, perhaps from the consortium of skater teens who had also snuck in and were being escorted out, fistfuls of cake in hand.

At the front of the house, two giant beams of light crisscrossed into the night like the legs of a burlesque dancer. Reporters and photographers crunched together under a tent nearby.

“Do you mind if I smoke?” a woman asked as she stepped onto the front porch.

“No, of course not,” I said. She was a worker of some type, dressed in the obligatory black button-down and black pants.

“I quit, but tonight I need one,” she said, lighting up.

“I hear Kate Gosselin is here, the one with all the kids. I heard something about a Real Housewife? I think some celebrities are still coming,” she said, gazing at the tent below. “But really, who would recognize them?”

We all laughed. I wanted to talk with her more, hear her tales from these sequined trenches. That’s what I should’ve done. Alas, I suddenly needed to dance. Salt-N-Pepa spoke to me: S-s-s-s-salt. Salt n’ Pepa’s heah! And we’re in effect. Honestly, who can resist, “Push It”?

I plunged into the crowd, watching uptight, stiff dance moves and unbridled writhing from pudgy tuxedoes, knowing my conflicted shimmies were no better. I put my hands in the air when Darryl “D.M.C” McDaniels from Run D.M.C. told me to. When Wayne Brady scurried by, I grabbed his bicep. I have no idea why. Derby wears on logic, I suppose.

Fortunately, I snapped back to reality when I found myself swaying to Kix Brooks’ rendition of “Mustang Sally.” It was time to go, and we walked out just as easily as we’d walked in.

King of the Derby Animals

Putting on the ritz